Great names in this cast - Oliver Platt, Martha Plimpton, Brian O'Byrne. Unfortunately the story drags and at one point i thought i'd stand up and tell Oliver Platt to shut up and move on! There's a message behind all of it - which is laudable, but took way too much effort to get to. Three main scenes - all way too long.

I went into this one with a high expectation and came out with an opinion in the basement. Good idea. Bad execution.
Reviewed by: doug marino 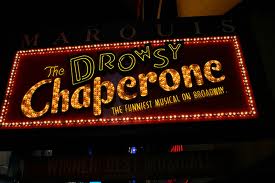 I think if I could ever write a Broadway show, it might come out just like this one! I must say, I went in with mixed expectations but I came out beaming from ear to ear with a smile and rave reviews for the clever and unique story!

Bob Martin wrote the book and was ever so crafty to also star as a character in the show. Now, I know what you might be thinking - I have many times before told you to beware of the guy who writes and stars in his own play! But this one is different. Trust me.

"The Drowsy Chaperone" is really a story in one man's mind about a musical called "The Drowsy Chaperone"of days gone by. The entire story is about how musicals just sweep you away and take you to a place where you're not sad or blue. All this is relayed to us by "Man in Chair", who's sitting in his living room in a not-so-fancy New York apartment on a rainy afternoon listening to his favorite record album of a Broadway musical (yes record album) to cheer him up. The clever part here is that Bob never leaves the stage. He peppers each scene (just short of interacting with the characters) with his own commentary (and comic wit) on the show. He never let's us forget we're watching what he's hearing and enjoying on his record album. 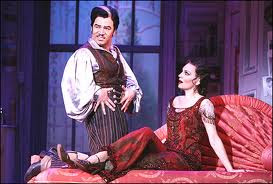 Now - onto the show - within the show - - Sutton Foster (from "Millie"), Georgia Engel (you know her from "The Mary Tyler Moore Show"), Edward Hibbert (you know him as Gil Chesterton on "Frasier"), Jason Kravits (you know him as Richard Bay on The Practice") and all the others in this true "cast of characters" all entertain us!

The actual story of the Drowsy Chaperone is really musical theater fluff - which if often pointed out by Bob - which keeps us laughing even harder. At one point in a company number the record gets stuck- so the actors on the stage "get stuck" (hehehe). He goes to the bathroom at the "intermission" and tells us to listen to the entre act by the orchestra until he returns. The actors all come out on stage in completely different costumes surrounded by different scenery - (oops, he put the wrong record on the turntable (hehehe). See, it's silly funny!

Even if you're not a Broadway musical freak like me - I'm pretty sure you'll leave the theater with the same warm feeling inside. It's truly the Broadway Musical of all Musicals this season! Put your blades on and glide on over to the Marriott Marquis!
Reviewed by: doug marino

Two great actors. Too much hype.

Neil Simon's play is funny, but as stale as week old bread.

Somehow think this show with any other actors would flop.

Any show staring these two actors is going to be a smash hit.

This is all disspointing and unfortunate.
Reviewed by: doug marino

Picture this - Tom (Ty Burrell) apparently has a lot of money - a huge house in Montauk (awesome set), a Mercedes in the driveway, and a successful computer company - so think what you may... He hires two washed up Broadway actors to play "his parents". You soon find out it's to impress his girlfriend to whom he is going to propose this weekend. He's trying for the "perfect family" look this weekend. Sounds harmless - right?

After all the characters meet and he's briefly out of the room - The fiancee blurts out that she can't go on lying to such sweet parents - - he's gay and she's been hired to play his girlfriend for his parent's visit this weekend. Seems harmless right?

But wait a minute - They quickly realize they are all actors. What do they all do with this information? They all know... But he doesn't know they know. Why are they here? What kind of creepy guy is he? What crazy plan does he have for them all? 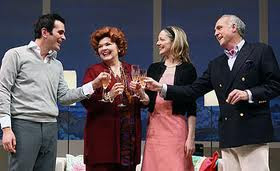 Well - we eventually find out at the (very) end of Act 2 - and let me tell you it was the stupidest ending I could have imagined! All that time invested (with these pretty fine actors) and all for this?? I enjoyed the eternally caustic Marnie (Debra Monk) and her ever dramatic husband Jerry (Larry Pressman). The "fiance", Natalie (Judy Greer), aptly rounds out the comic trio. Debra Monk really made the show worth the price. All things considered - she's a gem! I really thought Tom yelled too much and seemed like too much of a psycho - even though I guess he was supposed to be playing one - I just didn't enjoy his demeanor.

This play, written by Paul Weitz, went to a place a bit too dark for this audience, I must say. How far will people go for the "performance of a lifetime"? What is "pure acting" and a "great performance"?.

Just when you think it's a non-musical version of Dirty Rotten Scoundrels(off broadway, of course), the plot changes - it's a love story. But wait - is it? Can George Love (Max Caulfield) complete his caper? Is Adelaide Pinchin (Amelia Campbell) really as naive and innocent as she seems? A pinch of phychological drama always makes the evening electrifying. 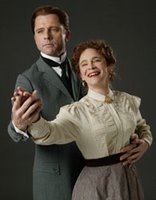 The drama set in 1910 in London keeps you guessing right unitl the very end. (I won't give it away, don't worry).

Both Max and Amelia ruled the stage together and held your attention the whole way thru this tale. Adelaide's transformation in Act II is both ying and yang. It makes her stronger - able to stand on her own - stand up to George - but what does it ultimately get her?

Swing on over to the Promenade Theater on 76th and Broadway. Even if it's just for a chance to see Max (you might remember him better as Miles Colby from Dynasty) with his shirt off - it's worth it!
Reviewed by: doug marino 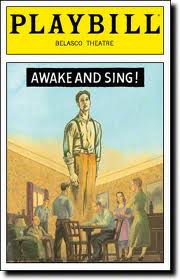 You may find yourself wishing you were able to do either of the two key title words during the show! Seems strangely appropriate that this would be a Lincoln Center Theater production. Not sure if this one would be able to stand on its own as an independent production.

Unfortunately the cast was a dichotomy - either very talented - Zoe Wanamaker (the mother) or a series of "Broadway debuts". And believe me, you could see the difference. While it was nice to see Lauren Ambrose (Six Feet Under) on stage I didn't get that same "she's deep" feeling as I get when seeing her on "screen". The brother (Pablo Schreiber) seemed slightly over-acted (perhaps that had something to do with the dated and stale plot). It was a treat to see Ben Gazzara - but I was not sure if his speech impediment was acting or the result of a recent stroke. Sad, but true. 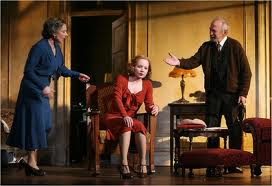 Act I seemed to crawl. Act II picked up a bit - and I must say that I truly loved the use of the disappearing walls in the apartment to symbolize the "freeing" of the characters from their "emotional prisons" as time passed in the play. I think that WAS the best element of the show for me. The show progresses to the "obvious" end (most seemed to know where Grandpa was going and what he was going to do). I just didn't think the play had the necessary ingredients to keep an audience interested over 2 hours and 30 minutes.

One other note - it seems that production had to have a special white sheet of paper inserted into the Playbill (like those "Is your Cell Phone off?" pages) to tell you that there would be an additional 2 minute pause between two scenes (in addition to the TWO intermissions!). Apparently, people have been getting up and leaving thinking the show was over at the wrong time. I wonder why?!

Or perhaps they simply took the opportunity to flee under cover of darkness!
Reviewed by: doug marino

[title of show] - off Broadway 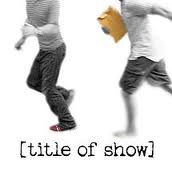 Witty, sarcastic, young, full of energy, and what you would think would be the most boring topic in the world instead sizzles at the Vineyard Theater! Jeff Bowen and Hunter Bell present a new musical written by them, about them, and for them. They are cute, they are funny, and they are on stage acting out a play for a musical theater festival about two cute and funny boys writing a play about two cute and funny boys trying to write a new musical... Ok - you get it? Art imitating life... Life imitating art?

Clever dialogue, catchy lyrics and music - they even gave the piano player a few lines in the show ("It's ok, we cleared it with the union", they exclaim!). They obviously rail against the establishment (but I'm sure that either of them would take the lead role in Beauty and the Beast if the price was right)! 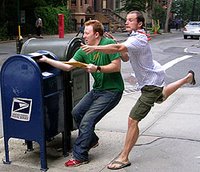 It's out there - for sure. Struggling artists, wacky friends, zany circumstances abound. I liked the comedy around some of the scenes just "ending" to black. Someone clever must have written the lighting queues too! Quite a few of the songs were catchy - including "Nine People's Favorite Thing" (I'd like to be nine people's favorite thing rather than 100 people's ninth favorite thing), "Monkeys and Playbills" (a very clever use of old flop musical titles - one after the another strung together in a whole song and scene), and Montage/Photo Shoot" (change it, don't change it).

It's been extended - and there's a good reason - you'll laugh and you'll enjoy! Wander down to the Vineyard Theater on E.15th and catch these crazy boys and girls while it lasts.
Reviewed by: doug marino 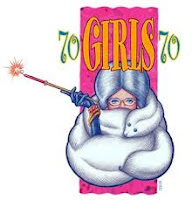 This was a Sunday evening TREAT! The show is about old people - and the cast of "old timers" was like the billing at a "Best of" award show. Encores! at City Center outdid themselves with this cast.

If you know anything about Encores - they put on rarely produced musicals. This one, by Kander and Ebb, appeared in 1971 just after Cabaret and just before Chicago but just didn't make it big.

This show is literally a show within a show - it was an attempt to give "older" folks a place in the spotlight as well as a role in the play on stage. So clever. Despite this fact, unfortunately, it seems that Follies (another show about old people) just opened on Broadway before this one - and the word on the street is that this one just couldn't compete. Oh well - that's how things work out sometime. It only ran for 35 performances. 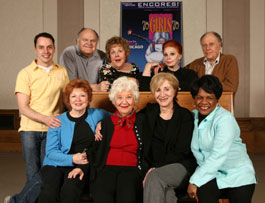 Check Out this Cast:

Everyone was supurb. Encores only runs for a week, so all the performances are staged with the actors using their libretos. It's informal, yet still effective. And with this cast of characters you barely even noticed.

We'll just have to see who else makes it along with me!
Reviewed by: doug marino