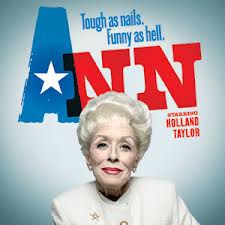 "Tough as nails, Funny as hell."   That just about sums it all up.  Ann, a touching, heart-felt one-woman memoir of a classy and brassy southern belle makes it debut this spring at the Vivian Beaumont Theater at Lincoln Center. 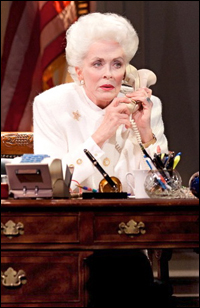 Written and performed by Holland Taylor, the show, as you would expect, takes you on a tour of life of the grande-damme of Texas and National politics, Ann Richards.  Ms. Taylor completely embodies the former Texas governor - and on more than one occasion you find yourself blinking twice - just to remind yourself that there's an actress on the stage - not Ms. Richards herself.  Ms. Taylor nails the white hair and the drawl, but more importantly her swagger, the way Ms. Richards awkwardly placed her one hand behind her back when speaking, and of course the lipstick, the pucker and the delivery of the zingers - always with love. 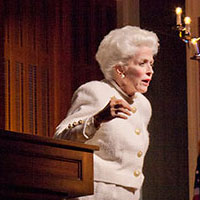 Done in two acts, Ms. Taylor, who likely needed little direction by Benjamin Endsley Klein, effortlessly begins the show with a college graduation address, transitions to the tale of her upbringing, her rise in local politics to her eventual coronation as the *second* woman governor of Texas.  (You'll find out about the first woman too).

The voice of her assistant is that of Julie White.  And you may not realize it when you are in the theatre but Ms. White is not present.  The entire track is recorded which makes you stop and think about how comfortable and well rehearsed Ms. Taylor must be in her role.  To hold an entire act's telephone conversations with a recorded track takes a whole lot a' chutzpah!

We see Ms. Richards all the way to her death in what turns out to be an brilliant stroke of theatrical genius leaving everyone to exit the theatre with a whole lot of good advice and and a warm heart too.
Reviewed by: doug marino 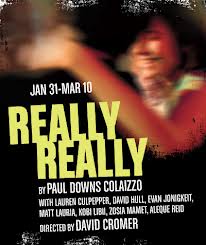 Paul Downs Colaizzo takes a dull pencil-to-paper with his new work, Really Really.   New take on an old issue?  Rape.   But as we come to learn, there are always three or four sides to every coin.  Perhaps it wasn't really rape.  Circumstances really do matter.

Set deep in the me generation's barely post-college genre, we get a splash of several issues du jour - lazy rich kids, gold-digging other-side-of-the-trackers, privileged kids who are damaged in some way we just can't notice at first, alcohol, sex, sexual politics and more.

The trouble with this one is that it's got that "I've seen it on Lifetime (Television for Women) about 17 years ago.  It's like a visit to Doing time on Maple Drive - the Next Generation.   Don't get me wrong, there's plenty of skin and muscles on these boys to keep even a monkey's eyes glued to the stage for hours. 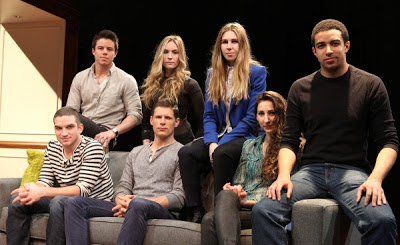 David Hull (aptly WASP-ily named, Cooper) and Matt Lauria (aptly WASP-ily named, Davis) provide plenty of jaw dropping eye-candy (too bad it wasn't just a smidge hotter in the theatre, the sweat glistening on them would have been glorious).  Evan Jonigkeit (also aptly simply named Jimmy) while plenty of eye-candy himself, provides a bit of contrast in Jimmy's looks, brains, and upbringing.  Zosia Mamet (Leigh) takes center stage as she weaves her web along with her sister, Haley (Aleque Reid).  And Kobi Libii (Johnson) weaves his geeky, smart, and nervously endearing self into your heart along the way.  Lauren Culpepper (Grace)  provides that self-deprecating comedy of her character that lightens the load several times.

I think it was the nature of the subject-matter, not necessarily the actors, that made this feel a bit amateurish.  The actors all seemed quite rehearsed and well-directed (and yes, easy on the eyes).  In the end, the story was a bit trite - with a new twist that just couldn't overcome the feeling of a weekend snowed in watching reruns on cable TV.