It's not really that good, but it's light hearted, silly, and delivers what it promises - entertainment.  It's not really a musical, nor is it a play - it's really just like an extended SNL skit.  If you remember the Forbidden Broadway properties - this is no different - scathing and silly riffs on popular culture, news and politics.  It's like they're making fun of Entertainment Tonight.

The cast seems to ebb and flow and as a matter of principle I was not happy that there was no Playbill.  NO PLAYBILL?  How do I know who the actors are?  Well, I suspect it is partially because the producers are cheap and that the cast and material changes so frequently that they could never be able to keep up.  The songs are like little ditties - i assume adaptable to whatever the news (lyrics) of the day are. 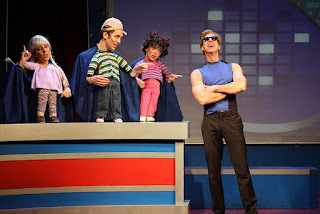 The cast I saw included the surprisingly fit Mark West, and the devilishly handsome Taylor Crousore. Listed in the credits is Christine Pedi, whom I was looking forward to see but was no where to be found. I assume that Susan Mosher and Carly Sakolove were the other two women but really have no way to verify this BECAUSE I HAD NO PLAYBILL.  I suppose the skits and songs are flexible enough to re-arrange the show on a regular basis.

The ensemble is OK.  In various combinations they did their schtick, but I think even the performers know who their audience is and how utterly unimportant it is to be good.  For the price of a TDF ticket it was well worth the 75 minutes of humor.  Much more and even a tourist might be disappointed.
Reviewed by: doug marino