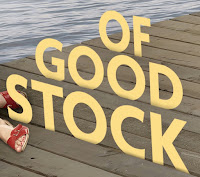 Melissa Ross seems to be under the delusion that messed up and messy people who were born to cheating and unhappy parents are considered to be born "of good stock" or are "good stock" themselves.  The funny, poignant, and slice of life production by Manhattan Theater Club on the City Center Stage I by its title seems to suggest so.  Hardly the case, although the production itself is quite good and for too many probably cuts quite close to the bone.

Although the headline name seems to be Alicia Silverstone who aptly plays the Legally Blond type sister (Amy), in fact the entire cast is quite delicious.  There's a flavor of some affectation for slight control freak with cancer (Jennifer Mudge), lost and young (Heather Lind),  cute, cuddly, and genuine boy from Montana (Nate Miller), Northeast "good guy" (Kelly AuCoin) and uptight trapped groom to be (Greg Keller).

I'm not sure if we are supposed to like any of these people or just see some reflection of ourselves in any one of them but the story unfolded mostly as expected and maybe took about 15 minutes too long.

Families are mostly complicated and according to this version, messed up.  It's mostly true but do we need a play to remind us of this fact?
Reviewed by: doug marino

Talk about the down and out - this play delves into the lives of the residents of The Hummingbird Motel in New Orleans - for the good, the bad, and the ugly - and it's mostly ugly. 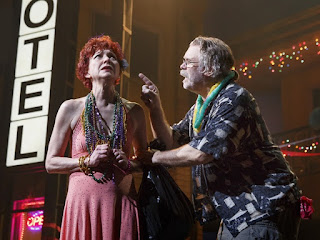 Julie White (Tanya) is the deficit lady-in-charge at the motel.  Despite the fact that she's a prostitute, she's loved, listened to and respected.  Her friends care so much about her and each other.  One of the other residents even tries to keep her off the pills.  With a great ensemble cast, this show socks you with a 1-2 punch.  It ain't a happy time, but at their core these down and out people have a whole lotta heart and soul.  K. Todd Freeman (Sissy Na Na) takes second position as the transvestite resident with a whole lotta sass.  Hunky Joe Trippett (Baid Boy) strolls into town after he has "escaped" to marry a wealthy woman but as they say - You can take the boy out of the ghetto but you can't take the ghetto out of the boy.

An interesting choice for a late spring show, Lisa D'Amour's work is a frank and honest look at what makes good people - and in this case, it just ain't money.  Joe Mantello's direction is a healthy dose of fun, frivolity, and honesty.
Reviewed by: doug marino