For Peter Pan on Her 70th Birthday

Sarah Ruhl has a tender, touching new play running over at Playwrights Horizons.  For Peter Pan on her 70th Birthday is a story about death and dying, family (the Catholic version of one),  different political opinions, and growing up.  Tie in a memory of Peter Pan and you have quite a nice evening in the theatre. 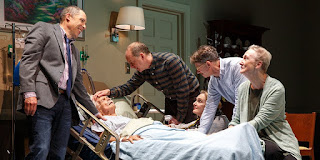 The show is billed as 90 minutes no intermission- but there are, nonetheless, two distinct acts.  Kathleen Chalfant (Ann), Daniel Jenkins (John), Keith Reddin (Michael), David Chandler (Jim), and Lisa Emery (Wendy) are all siblings and their father, Ron Crawford, is dying - literally - on stage.  As a minor point - i would have thought the kids names would be more standard Catholic fare such as Mary, John, etc... but I imagine there is a reason for everything.  As he is dying, there are questions (is he in pain), there is conflict (give him more morphine?) and plenty of cordial and comforting family memories being discussed.  Fast forward - dad dies and the family is gathered around the dining table (a wake of sorts) to discuss their father, life in general, and a dose of politics which reveals the divisions and differences among the family members.  Something common to many families, especially the large Catholic ones from Davenport, Iowa. 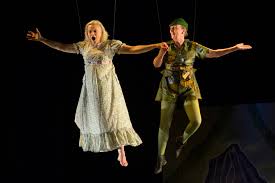 The play opens up with a memory played in front of the curtain (Kathleen Chalfant).  After the wake at the dining room table, we really see Act II take shape as Ann becomes Peter Pan and the siblings are the children.  This all stems from her beliefs in god, her life choices, and her general unwillingness to grow up.  Yes, indeed Ms. Chalfant, a limber 72 years young does fly and it as delightful as it seems.  The entire second act around the literal Peter Pan theme is designed to enhance her don't want to grow up because that means I'm going to die soon" outlook.

A generally entertaining, tender, down-to-earth play with just a dash of fun and a healthy dose of heart.
Reviewed by: doug marino