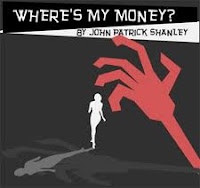 The Animus Theatre Company is presenting a fantastic stylized work, Where's My Money, by playwright John Patrick Shanley.  An homage to the Film-Noir style in the cinema, this stage production is an attempt by both the playwright and the actors to bring it to life in a live theatrical presentation.

The 3 mysterious and provocative stories unravel in the play eventually all come to intersect in a grand crescendo.  The youthful actors all portraying characters seemingly at least a decade older do a stand-up job at fostering the ominous sense of mystery and sense of impending danger that in a movie would be done with camera work and dark music with an occasional "gotcha" riff. 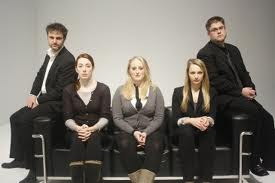 One stand-out performance was that of Sydney (Jeff Todesco).  He seemed to really absorb the sense of the style and use the "did you hear that" moments and his many darkly humorous lines to bring a real sense of the genre to the stage.  A quirky and off-beat Natalie (Amy Northup) used her deep dark secret and social awkwardness to induce many laugh.

I'd have to say that the one role I wished I could have was that of Tommy (Jamahl Garrison Lowe).   He utters the titular lines of the play (and not much else), wears the only color in the entire production, but still manages to bring the entire stage to their knees with fear!

For an inexpensive and fun day or night in the theatre, head down to the Cherry Lane Theatre and check out what all the buzz is about in the Studio space.   I'm going to guess that you will find a dash each of Mind, Spirit, Courage, Passion and Wrath.
Reviewed by: doug marino

A play about cancer and dying is probably not something that is first on your uplifting winter "must see" list.  But don't click the back button on your browser just yet.  Attention must be paid.  This play is a modern watershed of issue and emotion.  Cynthia Nixon may be compared to the prior leading ladies in this work, but without ever having seen those other leading ladies (whom I also adore),  I give Ms. Nixon a standing ovation right here - not only for her acting, her emotion, and ownership of the role, but for her giving life to the words on the page and to all those who are touched by cancer. 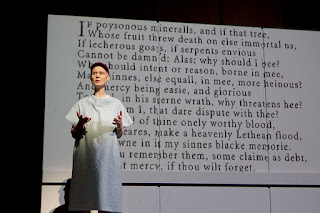 I'd like to highlight something that I have not seen in many of the other reviews - which tend to focus on Ms. Nixon's performance and the intelligent play on literature, poetry, grammar, God, and yes, wit.   What I found so biting was Ms. Edson's condemnation of doctors and, frankly, the entire health care system in general, while at the same time, the defense and promotion of the care giving of nurses.  Time and time again, to quite a successful humorous result each time, we hear uncaring, unobservant, superficial doctors go about their business of talking above a patient's head, asking "How do you feel today" to a patient suffering the pains of chemotherapy.   I found, quite often, Ms. Edson's dual emotions toward the situation - the superior intelligence and necessity of academics and researchers in the medical field and at the same time her bitter disdain for the lack of warmth, observation, and comfort by those same people. 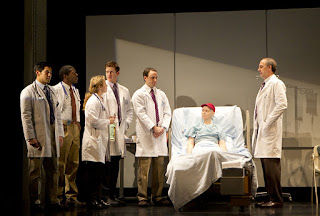 The bitter pill she is forced to swallow is that she herself is forced to transition from (literary) expert to subject, teacher to student, artist to model.  She intelligently and rationally comes to the conclusion about what her life was and what it was not.  How she lived it and just how it may end.

There are many layers to this play and Ms. Nixon and director Lynne Meadow have chosen some of its finest most relevant to showcase in 2012.  Bravo Ms. Nixon, Ms. Meadow and to the entire cast for a top notch performance of a touching work!
Reviewed by: doug marino Maybe Naked Angels has the idea first?  But in a Broadway season that already contains a very funny Chinese-culture play, I'm not sure why the Vineyard chose this time to mount Outside People exactly now.   Logistics aside, which may have just been mere coincidence, it is now inevitable that comparisons to Chinglish, on Broadway, will be made.  Unfortunately for the Vineyard, hands down, Chinglish is a better play - technically, stylistically, and comically.

While the two plays are clearly different stories, they both deal at a high level with the cultural differences between Westerners and Chinese.  In this case Zayd Dohrn's new work it's a biting commentary on the Westernization of China and the dirty underworld that exists as capitalism suddenly slams into the vastly unprepared empire.  It's about friendship and the many ways that can be interpreted, used, and misused by both parties to a friendship.  It's about love, labor, and economic freedom. 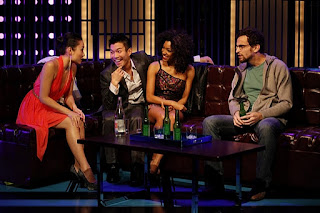 All those heady topics that failed to impress me aside, the playwright shrouded the friendship and plot in so much mystery, it was frustrating and confounding at times.  Where was he going?  Is he going where I think he is?  What does David Wang really do?  Is she?  or Isn't she?   Not all of this is bad - i like the approach, but the execution seemed to be lacking, unfocused, and misleading.  Maybe a Chinese director would have helped matters?  I'm not sure.

T'was a serious topic, some great acting, and a pace to the work that propelled it forward, but in the end, it missed making some connections, lacked a compelling reason for the entire circumstance of Malcolm's being in China, and somehow left most of the audience wondering (and I don't think this was intended at all) whether Xiao Mei was or wasn't who she was accused of being. 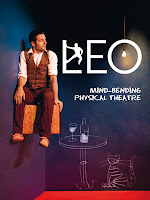 What a delightful and entertaining way to start off the new year  - and it wasn't a big budget Broadway musical with 17 stars flying around the theatre!  LEO, the brain-child of Tobias Wegner, a Belgian trained acrobat and award winning performance artist, is a simple, mesmerizing, physical, trick-of-the-eye performance-art, music, and dance work that literally defies gravity and pleases the eyes. 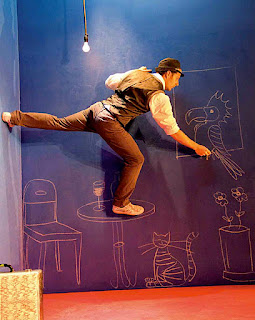 LEO is the unusual story of an ordinary man who finds himself in a world where gravity is literally turned on it's side. With his trusty suitcase of surprises, LEO embarks on this creative journey - all without the spoken word - in a nondescript room of red and blue and a single light bulb.   His journey involves dance, original on-stage drawing, acrobatics, and music.  Even with a complex description of how the show is technically presented - you'd never appreciate the artistry so I won't even attempt it.  Let's just say that it has to be seen - with both eyes - to be thoroughly enjoyed!

Mr. Wegner is a true performer - beyond limber - and quite handsome in his boyish approach to the role.  As many in the audience did, you'll find yourself slowing giggling as the performance progresses, smiling at the wide variety of musical accompaniment - from Frank Sinatra and Ravi Shankar to The Grits and Slayer to Tchaikovsky and Beethoven, and thunderously applauding at the end of the journey - happy for LEO and proud, envious, and satisfied that you took in a brief hour of Mr. Wegner's talents - with both eyes!
Reviewed by: doug marino

To the delight of every audience member, the orchestra at the Richard Rogers Theatre roars to life from the first bar of the George and Ira Gershwin and DuBose and Dorothy Heyward's luxurious operatic musical, Porgy and Bess, and completely fills every nook and cranny of ornate theatre on West 46th until the very last bar 2 1/2 hours later.

Norm Lewis (Porgy) and Audra McDonald (Bess) turn in flawless performances along with a top-notch ensemble cast including the devilishly slick David Alan Grier (Sporting Life).  The stage is simply and appropriately shabbily adorned and the costumes are equally appropriate and well designed for the period.

Adapted by Suzan-Lori Parks and Diedre L. Murray, the story moves us swiftly through the poor neighborhood of Catfish Row in Charleston, South Carolina in the late 1930's and weaves a hopeful yet sad tale of the poor black residents who form a deFacto family to both provide for each other and protect each other.  The story and this adaptation displays their strengths and weaknesses, devotion, and desires with aplomb.

Superbly orchestrated, the show is simply a magnificent example of an appropriately refreshed revival with all its roots firmly grounded in the original.  Don't hesitate for a single minute in getting your tickets.   The price of the ticket is well worth the value received in return - and as a matter of fact, Tony-nomination worthy performances aside (one for each of the leads and many more i predict), the focus on the orchestrations and execution by a full and robust orchestra in the pit is worth the trip alone!
Reviewed by: doug marino