In today's political environment, I'm surprised this show is not getting more airtime and exposure.  Part experiment, part theatrical experience, Her Opponent seeks to open eyes and get you thinking about gender and your biases.

Joe Salvatore and Maria Guadalupe reverse the gender of the actual candidates and reenact select debate dialogue verbatim.  Sounds like a snooze fest? Or does it sound like you'd throw your shoes at the stage?  Well, I think you might be fairly engaged mostly because a woman is saying the things Mr. Trump said. Equally, you may be unpleasantly surprised at a man acting the way Hillary Clinton did.  I warn you now, you may still agree or disagree with WHAT the candidates said but you will see the message from an entirely different perspective. 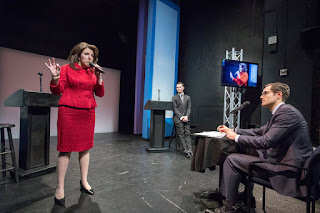 Rachel Tuggle Whorton tackles quite accurately of Mr. Trump.  Daryl Embry equally aptly tackles the persona of Mrs. Clinton - both nailing certain mannerisms, patterns of speech and general stature. Only the pronouns (he/she) were changed to make sense in this environment and the names were changed but maintained the same rhythm - Brenda King and Jonathan Gordon. Andy Wagner plays the moderators who in all honesty were not really mentioned or identified, except for a passing mention of Anderson Cooper that I can recall.

For a mild jolt and passing identification of your own biases, head over to the Jerry Orbach theatre at the Snapple Center today.