Although they didn't mention recycling or composting - (i could swear they advertised that!), this play was one thing for sure - preachy. You always have to be on guard when you see the playwright also staring in it! At least there's no doubting who Brian Dykstra voted for - (hint, it wasn't Bush). No doubting his convictions and beliefs - gotta give him credit for that.

Held in a very intimate black box theater (theater C at 59E59) the show hammered away at the current political administration, global warming, corporate and personl greed, apathy, and the evil dollar - - hammered, hammered, hammered... (get my point).

I actually didn't hate it, although at times he really did seem to be shoving too many facts down my throat. The play centered around a female, environmentally conscious, concerned citizen who takes money from the evil empire (the corporations) and 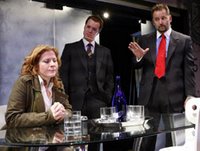 tries to use it against them by running for office and delivering her message in Slam Poerty style. Two evil and super intelligent lawyers (oh, they are the scum of the earth) really put the screws to her too!

The story could be shorter, but the message was well delivered. Humorous at times (Mark Boyett was supurb), preachy at others - it's certainly worth the small price for the 2+ hours.

Nobody said theater was all the same - it takes all types to make the world go 'round...
Reviewed by: doug marino

The Right Kind of People

Who are the right kind of people? Well according to Charles Grodin, they are the old-money, rich, white men and women on the Coop board of the buildings of upper 5th avenue.

The stinging social commentary played out on the Theater A stage at 59E59 Theaters. A cast of well groomed NYC socialites delivered the message that racism and discrimination is indeed alive and well in 2006. Wealth and priviledge may not promote it overtly, but behind closed doors, it's clearly the unspoken rather than the spoken that keeps it alive - Defending their kind. 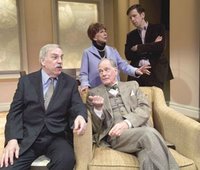 The emsemble cast (with a favorite of mine - Doris Belack) did a remarkable job of using the space and lighting effects to deliver story via a series of short conversations and group interactions.


Not that I live on 5th Avenue - but this show has got to make anyone who saw it think twice about how they actually got past the Coop board to get into their building... According to Charles Groden - it's even possible to be too wealthy!

Grab this one while it lasts... well worth a trip off the couch in your Coop to go see it. I'm sure they'll let you back in the building when you return.
Reviewed by: doug marino

You can only see so much "Broadway" before you realize that the talent has to come from somewhere! Where, you ask? Well - one place is Off-Broadway (you know, those cheap shows with low budgets downtown)
This week, my work world and my non-work world collided in a good way. At work we have a small project going on where we have hired a small temporary staff. One of those folks is Nicholas J. Colemen and this show is his latest project. I mention his name and put in his picture in here to prove my point - talent comes from somewhere - it doesn't just "appear" on Broadway ("I'm ready for my close-up, Mr. Demille").

If all you see are "big ol'" Broadway productions, you are truly missing some of the best talent out there - developing their art and honing their skills. Now, I'm sure Nick would love to be a regular on "One Life to Live" or "As the World Turns" (yes, he has been featured) but downtown in a small theater on East 4th Street - you can really see an actor with the freedom to create, the hunger to entertain, and the power to make you laugh. And Nick is just one of several.
This show is a mix of stand up, sit-com, and a bunch of over-the-top women with a message to tell you about society, sex and men! Performed in 5 vignettes, the 90 minute show leaves you wondering exactly how much fun the performers must have on stage when performing.

Angry Young Women in Low Rise Jeans with High Class Issues - a gem in the East Villlage! And keep an eye out - You'll see Nick (and his other cast members again real soon!).
Reviewed by: doug marino

John Patrick Shanley strikes again. This, the second work in his yet unfinished trilogy (it started with "Doubt"), is destined for a great public reception. It's now showing at MTC City Center on Stage I. 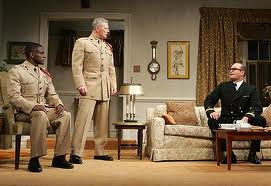 The story of power, lust, and loyalty - and of course, Defiance. Set at Camp Lejune (The Marines) in 1970, it deals with the struggles of racism in the military, belief in God, doing the "right thing" and the casualties guaranteed to fall out in these struggles. The characters - a black captain, a white colonial (25 yrs), the southern educated wife of the colonial, and the base Chaplin. The 100 minutes that ensue are a tour de force - with conflict, a dash of humor, cut with raw emotion. The ensemble cast highlighted individual talent without putting anyone performer up on a pedestal.

I never saw "Doubt" before the transfer to Broadway - but I'm going to guess that this smaller, more intimate environment gave it the fuel it needed to "blast" onto Broadway.
Reviewed by: doug marino

A diamond in the ruff. I think this play ranks up there as a recent favorite! Not exactly on Broadway, Theater 1010 is located in the basement of a Church on 84th and Park. Low budget - but certainly not low talent. This was a top notch cast with lots of energy, talent, and extreme good looks ( pssst - hey there, reed prescott my phone number is 917-273... oh sorry back to my review). 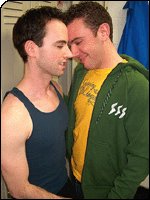 Ok, so the story deals with love, stardom, the stigma of being gay, being out, the hollywood spin cycle, the press and the papparazzi... but most of all, true love and friendship. Ironically, i saw the play on it's first performance - a story about figure skaters - on the opening night of the Winter Olympics!

Sweet, entertaining, easy on the eyes and slightly social and political, but heck - we got Brokeback Mountain this year, and frankly, i'd rather have seen this one on the big screen!

Lately, I've been more impressed with the quality of work off broadway and this one is no exception. Run, don't walk to this one. It's a limited run. Someone is going to scoop up these talented folks real soon!
Reviewed by: doug marino

Barefoot in the Park 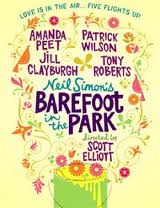 Barefoot in the Park - Neil Simon's 1960's classic comedy - back on Broadway in 2006! Well even if the acting is top notch- the story is stale and dated. In this day and age - who hasn't lived on their own and/or lived with their spouse before they were "official". Hardly believable and barely plausible today. There were quite a few funny lines - and the physical comedy made you chuckle. I just couldn't get over the feeling that I was sitting in front of a big "Nick at Nite" stage watching a re-run. A few times i turned to look around the theater to see if Patty Duke was there with me. 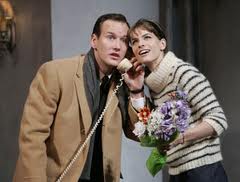 Jill Clayburgh and Tony Roberts turned in stand-up performances. Patrick Wilson was crisp and Amanda Peet was ravishing in her Broadway Debut. It's a shame the ensemble cast didn't have some updated material to work with - this group could have brought the house down!! I'm not sure this one will be out there for very long... Despite all the talent on stage.
Reviewed by: doug marino 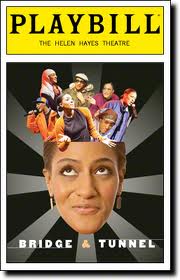 Sarah Jones has many people in her head and now they're on stage with her too. She magically transforms the Helen Hayes theater into the performance space for I.A.M.A.P.O.E.T.T.O.O (ok, i forget what the whole thing it stands for, but it was funny!).

Laced with social commentary and political undertones - the 90 minute show was a romp! One after another she transforms herself into one immigrant character after another each one with a story to tell.

From a Russian man, to a Chinese mother of a lesbian, to an elderly Jewish woman from Long Island, to a Vietnamese Slam-Poet, to the Hatian woman, to the Dominican school teacher to the wheelchar bound Mexican - the stories abound - one after another about the plight of the immigrant - yet in all cases she manages to display a ray of hope and light for each of them. She returns each time to the MC of the evening - a light-hearted Pakistani man with no easy life himself. She glides effortlessly from one character to antoher. If you close your eyes, all those people really were there!

Despite the laughter, you are continually reminded that the life of an immigrant to this country is tough. Discrimination is omni-present and the cycle never ends, no matter who is "next" to call this country home.

Kudos to Sarah and all her friends - each and every one of them are the even expanding fabric that makes this country great.
Reviewed by: doug marino