Now playing over at Playwrights Horizons is quite the eyebrow-raising new work by Taylor Mac.  Some even say subversive.  I say entertaining and hovering right at the top without overflowing with cliche and stereotype.  Yes, it contains many of the components of the kitchen sink - A transsexual (FTM) son, an abusive husband who has had a debilitating stroke, a military son returning home from the military with a dishonorable discharge for drugs, and a once dominated mother who has transformed her life into the crazy dominatrix of the family.   So I think you see that there is much opportunity for a bit of drama here.  And Mr. Mac does quite the job of weaving this tale - partly farcical - but mostly focused on the underlying message each character bring to the table. 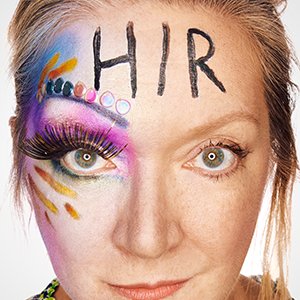 The divine Kristine Nielsen (Paige) helms the cast - ironically the only one who appears as she is (unlike the advertising where she is all made up in a drag like makeup).  Ms. Nielsen appears right at home with her bizarre behavior and crazy ideas - she is a true comedic character actress.  Cameron Scoggins (Isaac) appearing quite svelte and handsome took full advantage of the power of his masculine character and dominated the stage.  Tom Phelan, a remarkable transgender teen actor portraying a transgender teen character, held court as Max or Hir (the neutral pronoun as explained to us early on).  Daniel Orestes (Arnold) didn't get many lines since he had a stroke and was basically two steps above a vegetable but was always a presence on stage with his mumblings.

Kudos to David Zinn for the sets - at first a complete disaster - and the amazing transformation that happens after the intermission.

Fasten your seat belts - this one pulls no punches (well actually it does) and feeds the bizarre to you spoonful after spoonful until either you or Isaac has to throw it all up.
Reviewed by: doug marino

Well this one was a doozy.  I could spend a few dozen hours down the rabbit hole trying to analyze this wacka-doodle "show" now running at the New York Theatre Workshop . But instead I think I will just list all the words that come to mind when reflecting on my mystifying experience in the theatre.  In full disclosure I only felt that staying for one act was bearable, but I do hear that act II was similar and the torture factor far outweighed the artistic factors.  Here are those words: 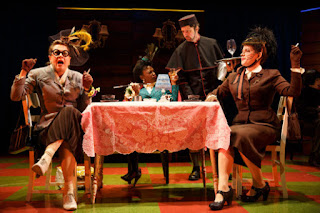 The show is a pastiche of ideas, colors, words, costumes.  What it is not is coherent.  It's a piece of mental theater.  I was, however, really impressed with the actors who had to learn these bizarro parts.  They don't make sense and I can only assume that it is like telling an opera singer to intentionally sing off key.  For a trained professional that's hard to do.  These actors were superb given the extremely bizarre and colorful material they were given to work with.   I made it only through Act I, but I have heard that Act II was even more of the same.  Experimental performance art should not be 2 Hours and 40 Minutes long.
Reviewed by: doug marino 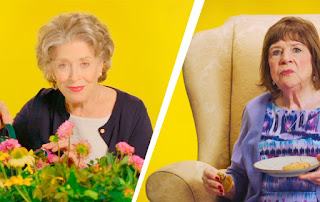 Marilyn and Abby are going at it toe to toe, no holds barred at the Bristol Place Assisted Living Facility.  And why not?  What have they got to lose?  Abby wants the room to herself. Marilyn, however, is determined to be Abby's sunny, chatty, and cheerful roommate.  Skydiving (conveniently linked to the show's title).  Lunch visits.  Police Reports.  Estranged family members.  Even death.  Will these cunning ladies duke it out till the last one is standing?  The referee in the tete-a-tete is none other than the scruffy, sexy, and burly employee and aspiring actor, Scotty (Nate Miller).  Marilyn's daughter, Colleen, (Rachel Dratch) and son-in-law, Derek, (Daoud Heidami) find themselves drawn into the battle.  Abby's estranged son Benjamin (Glenn Fitzgerald) eventually becomes a pawn in the game as well.

Head on over to West 55th Street and see who wins this epic battle of wills.  Fine acting all around.(especially by Scotty).
Reviewed by: doug marino 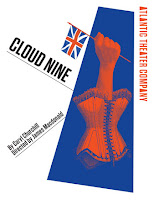 Having seen one of Caryl Churchill's other plays (Top Girls), I was prepared for the jolt of anachronism, intentional gender bending casting, and other theatrical devices.  Ms. Caryl does it well.  Her choices serve to facilitate and highlight her messages. 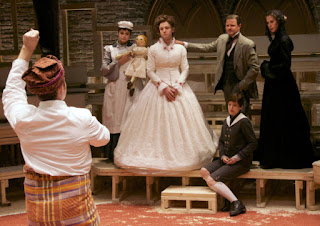 In the case of Cloud Nine, she casts a white man as a black slave, a man as a Victorian wife, an adult as a child, and young boy as a woman (and vice versa).   Further add the fact that Act I occurs in Victorian times during British colonization of Africa and Act II occurs in 1979 London - with the catch that only 25 years have passed for the characters - who themselves have been "re-cast" as other characters.  This may seem like quite a lot to keep track of, but the effect is subtle, the impact quite large as you begin to see the larger message Ms. Caryl is trying to convey.   What she is effectively doing is showing how the male dominated society and dominant and oppressive nations in the Victorian era (The Brits dominated and conquered the natives in Africa) draw a parallel to the modern society where the gay culture is experiencing the very same treatment - it's a different cultural construct, but the same effective oppression.  At the same time we see the importance and oppression of the female characters both literally and figuratively in Act I by the casting of a man as the Victorian wife.

The actors in this wildly fluid comedy execute Ms. Caryl's message with aplomb.  First and foremost we have the adorable and ethereal Chris Perfetti  is the face of the gender fluidity playing Betty the Victorian Wife in Act I and Edward a softer gay man in Act I.   Sean Dugan takes on the racial fluidity in Act I as Joshua the slave/servant and the dominant gay predator Gerry in Act II like it was a role of a lifetime made just for this handsome and confident ginger.  Izzie Steele takes on double duty in Act I (extra kudos here for all those costume changes) as a rag-tag shy and naive nanny and the powerful (which is unusual for the period) female Mrs. Saunders. In Act II she is a powerful and confident lesbian.  Clarke Thorell is the ultimate patriarch and family leader Clive in Act I and the naughty, loud child Cathy in Act II.  Brook Bloom has the other gender bending role playing young Edward in Act I and older Betty in Act II.  Lucy Owen plays a staunch and comically dry Maud the mother of Betty in Act I and the young Victoria (who as a side note was played by a doll in act I) toying with her lesbian side in Act II.  John Saunders is the suave single explorer Mr. Harry Begley who just might be gay before it was en-vogue to be gay and then plays the suave yet diminished husband Martin who's masculinity is on the decline in the era where women are on the rise.

If you're confused, don't be.  When you watch the action unfold, the character changes start to resonate, the messages start to decode and you will begin to delve into the issues that Ms. Churchill was trying to convey.  As billed, it is a play about power, politics, family, queen Victoria, and sex.  If perhaps Act I was a tad bit too long with a bit of unnecessary exposition and story, Act II was perfectly timed, executed and impactful.  Without a doubt, there was one element of this production that was universally panned by the audience - and that was the seating.   While the idea of placing this show in the round in somewhat of a "boxing ring" where the actors "duke it out" is brilliant - the construction of the flimsy, uncomfortable, and frankly cheap looking wooden bleachers was only made more painful by the 2H:40M run time.  #seatingepicfail

Despite the extremely uncomfortable and frankly unsafe seating arrangements that were constructed  for this production, the outcome was nothing short of remarkable.  A fine cast and a provocative message makes for an exhilarating evening in the theatre.