King Liz is definitely serves a niche market in the theater - basketball or more generally sports fans.  Usually these two don't mix very much at all.  However, thanks to the fine writing by Fernanda Coppel, this play sweeps through the sports industry,  more specifically, the sports agent / player relationship with fervor.

As you would expect in today's high stakes drafts and team rosters - recruiting young players with raw talent is key.  What happens when that talent is so raw it's actually a danger to itself?  How young is too young?  To what ends will agents and teams to to exploit talent?   These and many other questions are explored in this 2 hour tour-de-force presented at the McGinn/Cazale Theater of 2ST. 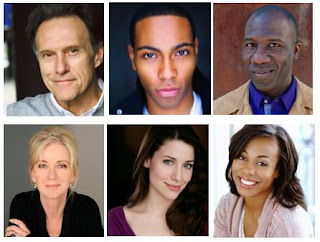 Karen Pittman (Liz Rico) dominates the stage with raw power, steadfast determination and a pure strength of will to succeed as a woman in a man's world.  She manipulates and attempts to mold young (very fine looking) and talented high school basketball player from Red Hook Brooklyn, Jeremie Harris (Freddie Luna).  The supporting cast - most notably Irene Sofia Lucio (Gabby Fuentes) and Russell G. Jones (Coach Jones) - fill in the drama and back story quite nicely.

With a quick pace and high volume the characters engage in what can only be described as a war of wills.  Who wins in the end and at what cost?  I leave that up to you to determine.   The oddest moment of the entire play was the bizarre opening lip sync which led me to think this was a drag queen show for about 2 minutes.  Thankfully nothing else in the show was as bizarre and I quickly forgot about it once the real plot began to furiously unfold.

Joshua Harmon has penned yet another "summer play" for all to enjoy.  It is being presented off-Broadway at the Laura Pels Theater at Roundabout and the venue and timing couldn't be more perfect.  It's like those summer beach books - not to complex, not too long, and a touch of serious but not too much that you're talking about the issues for days.  It's the perfect summer indulgence. 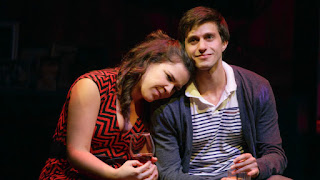 Trip Cullman has finally made his rounds complete at all the non-for-profit theaters in NYC and Roundabout is now finally the recipient of his fine directorial skills.  The show centers on the millennial, Jordan Berman, who is played with pitch perfect looks and tone by the adorable Gideon Glick.  He's cute, shy, and gay.  In this case it seems to mean he doesn't have any male gay friends.  This is a bit annoyingly unrealistic for the setting of NYC, but we'll go with it.  His BFF girlfriends are all growing up and one by one getting married.  Poor Jordan is being left in the proverbial dust because he just can't find anyone (again, in NYC I find this and odd premise). 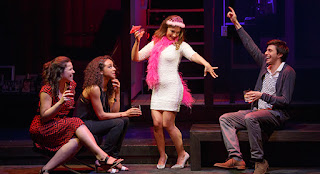 Exposition reveals that each girl is herself quite a different character and Jordan gets something different from each of them.  Laura (Lindsay Mendez) is perhaps his closest and most sincere soul-mate from his youth.  Kiki (Sas Goldberg) and Vanessa (Carra Patterson) both play slightly more wild BFFs.  Together all 4 make up quite a bunch of fun loving friends.  As a foil to his youth, Jordan also has a close relationship with his grandmother (Barbara Barrie) who we are lead to believe is old, spry, perceptive, OK with him being gay, and slowly losing her memory but holding on to life itself. (i thought it odd that his parents are never really mentioned from what i recall). 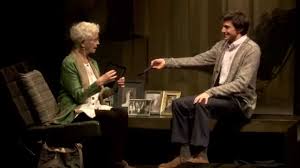 Act I was long and contained perhaps a bit too much exposition than needed to get the basic point across.  Act II was much more confrontational and emotional which culminated in a scene in which Jordan basically unleashes a lifetime of pent up anger, frustration, and angst (about being gay, being a gay BFF and a lot of other baggage) on Laura in a very long and emotionally played rant that in itself deserved a round of applause when he was done.

The play, like life itself, just moves forward and ends.  It's up to you to decide if it is hopeful, sad, inspiring, or depressing.  I suppose everyone can see a lot of character traits of both themselves and various friends in many of the characters - so everyone will take bits and pieces that suit their experiences away and it will be up to them to decide how they feel about the whole thing in the end.  I happen to see it with a bunch of single folks and I am left wondering if some of my married straight friends might take something different away from it than me.  I bet they do.
Reviewed by: doug marino