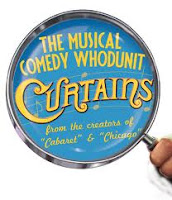 This Kander & Ebb - Rupert Holmes musical is a gem. It may not be as flashy-dashy as Drowsy Chaperone - but it does one thing well - it entertains.


The show numbers are big and bold - lots of high kicks and toes-a-tappin' during the many rousing full cast numbers. What more would you expect from a "show within a show"? The basic plot goes something like this... A (pretty bad) show is being rehearsed and there are a few murders (yes, one might expect Jessica Fletcher to show up!). The investigation traps the entire cast, crew, producers, and director inside the theater. While the mystery unravels - the police lieutenant lives out his fantasy by "improving" the many numbers and scenes ultimately making it a success (and solves the murder mystery too!). 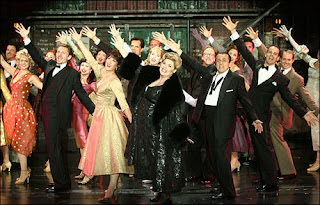 One can't help but also detect ever so slight references to songs and shows of days gone by... is KansasLand a spoof of OKLAHOMA!? Do we see the budding romance of the lieutenant and a cast member get played out in a fantasy dance ballet that resembles a Fred Astaire and Ginger Rodgers number? Does Show People have it's roots in Annie Get Your Gun? Probably so - and there are probably more that this theater novice just didn't pick up on!

It's goofy and silly and fun all around. I might say that while David Hyde Pierce (the 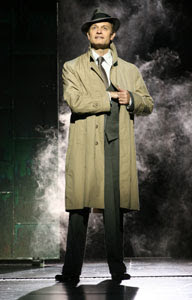 lieutenant) loves the stage and is a great comedic actor - he's not much of a singer or dancer. Debra Monk plays one of the show's producers and I have to say - You can hear a little Ethel Merman in her. She commands the stage with her character's powerful personality and biting wit. Edward Hibbert - as old as he is - simply steals the show as the stuffy, witty and cantankerous director. And you can never mistake the voice of Ernie Sabella - bellowing all the way off stage for his enterance. Yes, even the orchestra conductor has dialogue and a song to sing!
Yes, a bit campy. Yes a bit "old fashioned". Yes, not the "best" show you've ever seen - - but the supporting cast brings the house down with each company number. I did see it at its first preview so maybe they'll tighten up the show, cut some dialogue, and contain the energy. If they can keep you tapping from 8:07 to 10:15 after opening night they might have a pretty good run of it.
Reviewed by: doug marino 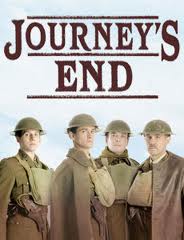 At first glance, it may seem that the Belasco Theater forgot to pay the electric bill. But upon closer inspection, you realize that Hugh Dancy, Boyd Gaines, Jefferson Mays, and Stark Sands need absolutely no lighting except for the candles to make them shine on stage.


The intentionally dim stage has been transformed into an underground bunker in Quentin, France during WWI in 1918. It's a tense 3 act play that takes you deep into the topic of what war can do to a person's psyche, how friendships change, and what the words honor, bravery, and loyalty really mean.

Let's just say, this play is going no where happy. The incredible sound system in the theater provides the backdrop of war - guns, shells, and loud, very realistic explosions. No surprises here. I saw the 4th performance of this show in previews and I left in awe. The acting is outstanding and the chemistry is superb.

Run - don't walk - to this one - but when you arrive - Sit. Enjoy. Absorb.
Reviewed by: doug marino 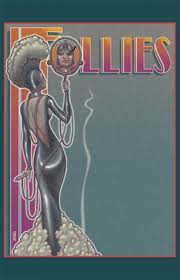 Encores! pulls off another Sondheim classic - Follies. As always, it's a partially staged "books-in-hand" production at the cavernous City Center for 6 shows only.

The star-studded cast lead by Victor Garber, Victoria Clark, Donna Murphy, Michael McGrath, and Christine Baranski laid all their 40 year old "dirty laundry" on stage for all to enjoy. As the story goes, these guys and gals were all show-folk for Dimitri Weismann (a rival to Ziegfeld) 40 or so years ago and are all back for a reunion at the theater they all used to perform in for one last night since the theater is being torn down to become a parking lot. The supporting cast of reunion-comers , no slouches in their own right, includes Joanne Worley (Laugh-In), Phillip Bosco (Broadway Legend), Yvonne Constant (International/French Cabaret Star), Mimi Hines (Broadway: Funny Girl, Sugar Babies, Hello Dolly, Nunsense, Pippen to name a few), Anne Rogers (Broadway: The Boyfriend, My Fair Lady, 42nd Street and more) and Robert Fitch (over 27 Broadway shows and counting). 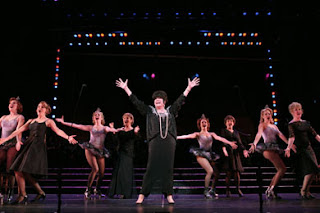 Not to be left off the list of those who deserve rave reviews is the "dual cast" of the younger versions of each of these "old-folk". The show weaves in scenes and flashbacks from the past alongside the current dialogue to give the audience a sense of "what really happened". That young cast was powerful, talented, and energetic - much as you would assume these folks all were in the days gone by. They truly provided the "oomph" behind the tap dance numbers and the effortless grace in the dance numbers. 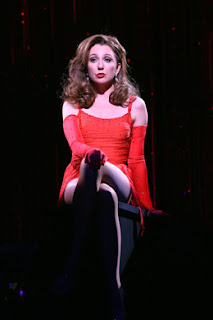 Christine Baranski who played Carlotta Campion sang the signature number I'm Still Here. She hit every line of dialogue with aplomb and left us laughing every time - but her vocal skills need a bit of work. Victoria Clark and Donna Murphy stole the show as the leading ladies. Both have an incredible command of the stage and flawless vocal abilities.

Victor Garber - Wow! For some reason i never expect and always enjoy the vocal powerhouse he is. And let's not forget Mimi Hines who sang the famous Broadway Baby. She knocked our socks off. And Joanne Worley - the ageless funny-gal - she powered thru Who's that Woman - and all but got a standing ovation.

It's not perfect, it's got a few flubs and scant scenery. But with a hit like this one and stars like this one and, of course, the Encores! Orchestra - how could it be anything but an entertaining evening? Sorry, I think it's mostly sold out - but for 5 more shows - it's still here!
Reviewed by: doug marino

25 Questions for a Jewish Mother

In this show, a mix of stand-up comedy and story-telling, Judy Gold tackles the subject of being a Jewish mother. Using her own mother as the oft comedic anchor, she set out to explore other Jewish mothers' experiences, lives, dreams, and regrets. She regales us with tales from her childhood all the way up to today and weaves the story of how a 6' 3" Jewish lesbian mother of two from the upper west side (yes, that's her) was equally tortured and loved by her (albeit stereotypical) mother and how that relationship was in many ways rooted in the culture of other Jewish mothers. 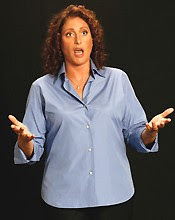 The story was actually more stand-up than I had expected - -but it was all good. A few belly laughs, lots of giggles - and surprisingly poignant and serious at many times. Judy morphed in and out of the voices and characters of many of the mothers she had interviewed for the show - - but none better than her own mother!


Admittedly, the show probably doesn't play well outside of New York (she took a form of it to Seattle to see how the 4 Jews there would like it). It's at the St Luke's Theater off-Broadway, so the audience is limited mostly to Jewish mothers and their friends and a few other "goim" New Yorkers who are Judy fans. And that's just fine - because if you're not one of those you'd probably sit there and wonder what the heck she was talking about all night ("Damn it Judith, it happened again - - Get the plant!).

Jacques Brel is Alive and Well and Living in Paris 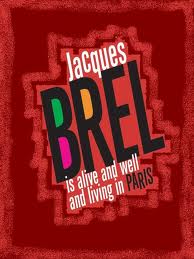 Now that we have gotten that out of the way - this indeed was one of the best musical shows I have seen all year - a total surprise! Put together by Eric Blau and Mort Shuman in 1968 from the original French musical by the show's namesake - Jacques Brel - it will knock your socks off! 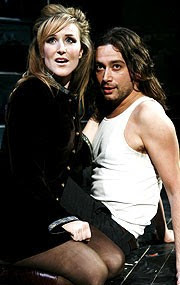 The show originated at a time of similar national discord - during the Vietnam War. Jacques Brel's music and lyrics speak volumes about the common man, the proletariat, love and war, and emotional loss. A theme that seems eerily relevant once again today.

There is no dialogue in this show - but there is a story. The story is artfully told through the lyrics and the emotion of each Brel song - a pastiche of sorts. Powerful and provocative, the four performers brilliantly bring this show to life. Robert Cuccioli, Constantine Maroulis (of American Idol fame), Jayne Paterson and Gay Marshall breathe a vibrant life into this gem.

Under Gordon Greenberg's direction - the actors take turns in this review - some solo, some ensemble - telling tales of joy and pain, of war and soldiers, of loves and lives lost, of happy gay times that are interrupted by war. The styles range from rock to ballad to lounge to tango to show tune and beyond. Gay Marshall sings some of the songs in French - but don't worry - you will understand and feel. The emotions are raw and powerful.

Despite the atrocious seating and dilapidated house, this play is honestly worth the value of a full price ticket. I don't say that very often -- and guess what-- you won't have to pay it - there are plenty of discounts out there - - to lure you into one of the finest off-Broadway shows you can find in 2007!
Reviewed by: doug marino 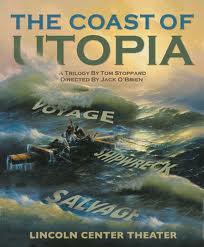 After $300, 9 hours, and cramped legs in those perennially undersized seats at the Vivian Beaumont - all Tom Stoppard left us with is:

"A storm is coming"

Are you kidding me? A few great performances (Jennifer Ehle, you and Brian O'Byrne were GREAT!) from the large cast were nothing compared to the sheer boredom of having to sit and muddle thru endless ramblings of the playwright. This, of course, is not the actors' fault. Kudos to the fine cast.

Lincoln Center Theater - all your 87 year old patrons are all going to die soon. That storm just might wipe you out at this rate. Step up your game!
Reviewed by: doug marino