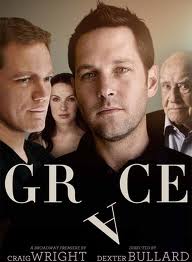 The proverbial gun is not so proverbial in this 90-minute stinger over at the Cort Theater.  The play opens at the literal and figurative end - loaded gun included.   We're instantly transported back in time and space as we revisit how we got here and what brought us to this exact moment.

Performances were hauntingly solid.  The pace is deliberate.  The intensity is ever-present.  Steve (Paul Rudd) and Sara (Kate Arrington) have relocated to Florida from Minnesota on a semi-religious, semi-financial journey to built a new faith-based motel chain (think - "Where would Jesus Stay?").  Their neighbor, Sam, (Michael Shannon) has experienced a tragic accident and loss.  Interloper and exterminator for the apartment building, Karl, (Ed Asner) brings both comic relief as well as some deeply painful emotion to the story. 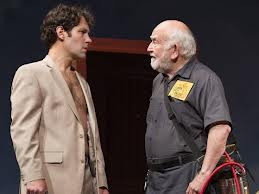 The stew, as you already know, is not going to work out very well for all involved.  What playwright Craig Wright intends to impart in this powerhouse of a play are the questions of God, grace, forgiveness, and purpose, what a messy life we lead, and how one person's redemption and happiness may ultimately be at the expense of another. 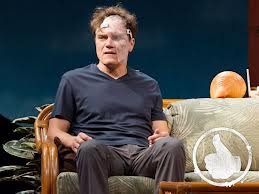 Adding to the chilling intensity of the deceptively simple "trashy Florida rattan" furniture was Beowulf Boritt's barely noticeable rotation of the stage floor and entire set itself - too slow to see it actively moving (think, watching a plant grow), but when focused on a particular scene dialogue you blink and realize that everyone ends up in entirely different orientation.  Add to that, Darron L West's incessant whine of tropical insects and biting scene change static buzz, you are never given the opportunity to forget that nothing good lies ahead.

If you're uncomfortable around guns, especially given the recent shootings in CT, you may think twice before attending this particular show.  In any other Broadway season it would just be a footnote.  Many leaving the theater felt it was an uncomfortably poignant and painful reminder of the potential and inevitable carnage guns can bring.
Reviewed by: doug marino 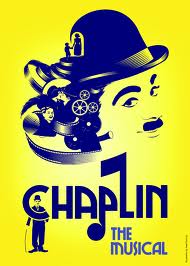 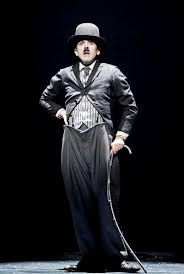 Roma, once again, was right!  Rob McClure is the shining centerpiece of this charming and delightful new bio-musical by Christopher Curtis & Thomas Meehan.  Chaplin is an audacious look at the entire life of Charlie Chaplin, a.k.a. the Tramp, from his birth in the London streets to his meteoric rise to fame in America in silent pictures, to his controversial political ideas during the Red scare in the '50s all the way up to his triumphant return to America in 1972  - filled with the untold tales of his many private sorrows and joys in addition to the many public achievements and scandals we already knew. 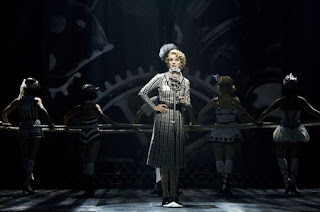 The entire score is lush, playful, and engaging.  But what captured my eye and earned my praise from the first moment to the last was the degree to which Beowulf Boritt's ingenious sets, Amy Clark and Martin Paklediaz's pastiche of vintage costumes, and Ken Billington's brilliant lighting design completely and thoroughly captured the monochromatic emotion and feel that the entire black and white era evokes in our memories. 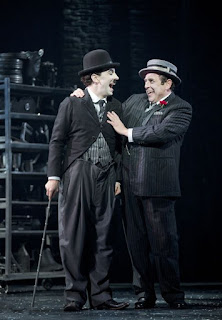 Rob McClure, already crowned the break-out triple-threat star of the season, most assuredly captured Chaplin with great care and aplomb in a fairly demanding role both physically and vocally.  His swan song 'Where are All the People?'  is undoubtedly the icing on the proverbial cake of the show to which Mr. McClure decisively and deservingly earned that rare event, a standing ovation, mid-show.   Stand-out cast members include Jenn Collela playing the well dressed, down-and-dirty Hollywood gossip columnist and radio show host, Hedda Hopper including a fine interpretation of the lyrical lilt to her unique voice and Wayne Alan Wilcox, playing Charlie's rock-solid and steadfast brother Sydney Chaplin.

The show has already announced a national and international tour starting in 2014 despite posting an early closing on Broadway January 6, 2013 - largely due to some mixed reviews compounded by the inability to overcome a box office slump during Hurricane Sandy.

If you can, RUN, DON'T WALK to catch this one before it quietly takes off on it's world tour.

Roma was right.  This play stinks.  And when I say "this play", I mean the actual script itself.  Theresa Rebeck got thrown off SMASH after the first season and someone should now officially throw her off Broadway too.  Dead Accounts amounts to nothing more than a bad sit-com that doesn't come close to cutting it on stage.  Most of the characters are way overly-exaggerated to be believed.  While perhaps a common trait in 30 minute situation comedy writing, it's not at all a good idea for a 2 hour stage play charging upwards of $100 per seat. 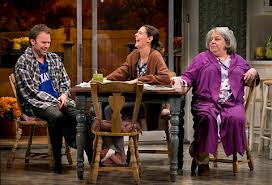 What about the acting, you might ask?  Well, that was mixed but decent.  Norbert Leo Butz, plays his sweet spot to the nines - a hyperactive, neurotic, mess.  Katie Holmes turns in a decent performance despite the trite material which has her vacillating between dumb and kind to just plain dumb. Jane Houdyshell shines in the role of dowdy and typical aging mid-western mother with limited brain capacity for independent thought and therefore fixated on God.  Josh Hamilton (Phil) had nothing more than a cameo-type role (think guest star on a SNL skit) and Judy Greer turns in what I would consider the worst performance of the evening.  The buildup to her character's arrival was substantial and the meek, baby-talking, inappropriately innocent girl that showed up was disappointing to say the least. 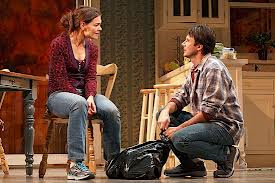 The New Yorker "observations" penned by Ms. Rebeck were marginally entertaining but like everything else, unnecessarily over-the-top.  The out-of-towners seemed to get most (but not all) of the jabs. And when it came to Ms. Holmes' scene stealing melt-down about the greed of banks, the audience clearly showed their mid-western ignorance.  (And by 'audience' I mean the gaggle of noisy out-of-town tourists straight off the big white bus who filled the last two rows of the mezzanine (read, cheapest seats) just because Katie Holmes was on the marquis while there were over 12 empty rows of seats  in front of them).

Roma was right - and the word is out.  Dead Accounts is indeed dead.   Dead on Arrival.
Reviewed by: doug marino

The Mystery of Edwin Drood

OK, take a deep breath.  Ready?  This one is a mouthful.  A delightful, delicious, and audaciously entertaining mouthful.

Charles Dickens started a novel and died before it was finished.  Rupert Holmes (Book, Music, and Lyrics) thought it would be clever to write a musical that offered a cast - playing actors - who were playing actors - in a  musical where the audience would vote on the outcome of Dickens' novel in an interactive, "first-ever" theatrical experience.  Got all that?   Don't worry it's not all that complicated.  It's actually quite fun. 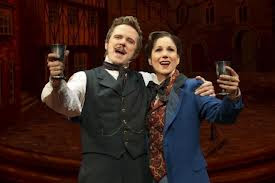 OK, so each of the actors plays and actor playing an actor.  For example, the stalwart, Jim Norton, plays the Chairman of the theatre company and then by proxy, Mr. William Cartwright in the musical.  Will Chase plays Mr. Clive Paget playing John Jasper in the musical.   And I could go on and on and on... This cast is one of those endless pools of talent both young and old - Stephanie J. Block, Jessie Mueller, Andy Karl, and living legend, Chita Rivera - just to start things off. 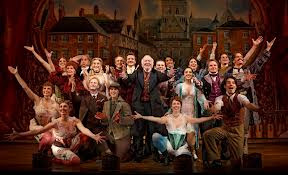 It's an entertaining, interactive, and fun Roundabout Theater Company production over at Studio 54.  Since the cast is intentionally interacting with the audience as their actor-characters, the joviality and camaraderie shines through and brings joy and delight - literally out into the audience and up in the mezzanine.  And at the end of act 2, you'll vote not only on who you think killed Edwin Drood, but a mash-up of other outcomes as well.

Well, I can't really tell you the ending.  While I haven't studied the book, i suspect there are a multitude of endings possible and ever more fun to be had rehearsing them all!
Reviewed by: doug marino 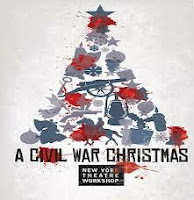 Paula Vogel has penned a historical perspective on an age-old tradition - Christmas.  Her version is a dramatic triptych on the holiday which takes place during the civil war.  Each of the 3 main plot perspectives share equally in the joy and sadness of the historical holiday - smack in the middle of the civil war - Stories from the North, the South, and the always steady Abe and emotionally unstable Mary Lincoln centrally located in the White house. 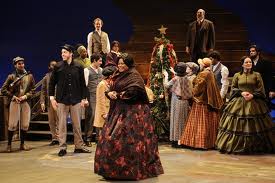 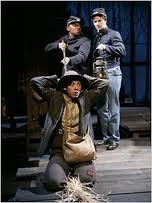 It's not quite a musical but more of a play with music - but less-so a play and more story-telling theatrical experience. The music was all Christmas carols cleverly placed throughout the scenes.  All the fine actors in full regalia and costumes played multiple characters with little-to-no scenery - merely a few props and chairs upon which the fine actors created an entire landscape and mood.

Of all the extremely talented actors, the one stand-out performer was Jonathan-David (yes, i correctly hyphenated his "name") as Ely Parker, Silver, Frederick Wormley, Moses Levy and others.  Clearly a trained dancer, a fine improv actor, and vocally impressive.  A stalwart and stubborn Mary Lincoln was played with Aplomb by Alice Ripley.

Having already seen Lincoln (Daniel Day Lewis) on the big screen just the weekend before and seeing this show just before Christmas put me in just the right mood.  I doubt this one would go over very well in August, but certainly a heart-warming, entertaining history-lesson on the small stage down at the New York Theatre Workshop on East 4th.