Lend Me a Tenor

What started as a funny romp turned into a tragedy of epic proportions at the Music Box Theatre.  More like a overly long episode of the Carol Burnett Show, I thought this one would never end.  Truth be told, I left at intermission.  The actors were all decent  - and frankly i chuckled quite a few time - but c'mon, even Carol Burnett has limits.  She can only try to make Harvey Korman or Tim Conway laugh so many times before the joke gets very old, very quickly.
Reviewed by: doug marino

I've just come up with a new final exam for a musical theatre class.  Here it is:  Pitch this idea to a producer and try to get them to put it on - -  The story of 9 black boys accused of raping two white women on a railroad car in the south in 1931 presented as a musical minstrel show with the boys all being actually black with the show's white narrator telling the story to the audience while intermittently playing a character throughout throughout the entire performance.  Good luck with that one, right?!

Well this is exactly what Kandor and Ebb set out to do and despite the death of Fred Ebb before the work was completed, it has finally been given its world primere in New York City at the Vineyard Theatre. Despite the awkward premise, the show works.   It instantly feels both entertaining and uncomfortable at the same time.  It's supposed to feel that way - but never lets you get stuck being uncomfortable for too long.  Memorable numbers, inspiring ballads, rousing show numbers and talent crawling all over the stage make for an invigorating and educational night of theatre.   Stand out performances by all the boys and most of all John Cullum as the interlocutor. 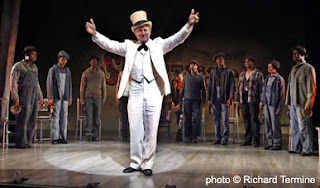 This one is likely to transfer to Broadway.  The stage at the Vineyard is small - probably too small, but Susan Stroman worked her magic nonetheless.  On a larger Broadway stage, this one has great potential.   I'm not sure it will have a long lasting run, but it will certainly make a substantial contribution to the live theatre experience and enrich its audiences substantially while there.
Reviewed by: doug marino

Alfred Molina and Eddie Redmayne turn John Logan's play into a 90 minute tour de force.  This is some of the best theatre around and two of the best actors for it.  Mark Rothko a contemporary artist is the subject - or shall we say his artistic viewpoints and opinions are the substance of the show.  Molina plays him with the intensity of a lion.  Redmayne comes along as a young, shy assistant in the art studio and turns out to be one of his most powerful foils. 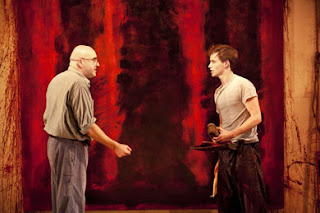 Art is not only performed on stage, it's created.  The stage is the studio.  Art is on the menu.  Look for one or both of these two to win a Tony this season.  This is theatre at it's most electrifying best.
Reviewed by: doug marino

A Cool Dip in the Barren Saharan Crick

I'm always a fan of the productions at Playwrights Horizons.  This one is a new work by Kia Corthron.  The play has a somewhat radical version of the enviro-political message - Save our drinking water.   William Jackson Harper takes command of the stage as Abebe, the young student / preacher from Ethiopia who rails against waste of water in America and everywhere else.  So much, in fact that the audience finds itself drowning in his sermons.  His host family has some issues too and somehow Kia manages to weave Abebe into their life to help heal them too.  Myra Lucretia Taylor (Pickle) and Kianne Muschett (H.J.) give admirable performances as Mother and Daughter.

A play with a strong message is hard to pull off.  Aside from its length, this one almost does it.
Reviewed by: doug marino

Looking back, this seemed like a pretty good match up on Broadway - the frivolity and acerbic hilarity of Australia's great Dame Edna Everage combined with the great American songster Michael Feinstein - a duo to be reckoned with, right?   Wrong. 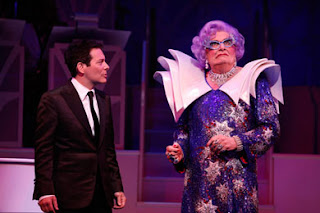 This show combined the worst of both.  Not nearly enough of the American crooner and the the Dame had only fleeting moments of her signature comic repartee with the audience.  The plot (if you can call it that) is a bit ridiculous and contrived - both artists booked in the same theatre at the same time doing what each of them thinks is his/her own individual show.  The madcap antics that follow are best left to the keystone cops or Monty Python.   I should have known exactly how the entire evening was going to unfold when, as soon as we sat down and compared Playbills (yes, I love my Playbills!), I realized there were two versions - one for Michael's show and one for Dame Edna's show.

Don't get me wrong - I love both of these veterans and was hoping for something grand - but instead got mediocrity at best.  I'd still buy tickets to each of them separately but for both of them i think it will be a long break before a return to the stage after this flop.
Reviewed by: doug marino

A powerhouse of a play written by Alexi Kaye Campbell.  Tremendous cast of four leaves you spellbound.  Two tales so eloquently woven together they seem as one.  Two very different times - 1958 and 2008.  They couldn't be more different - or could they?   I was mesmerized at the performances of Hugh Dancy (Philip) and Ben Whishaw (Oliver) slip effortlessly between the decades and weave a tale that is timeless.  Andrea Riseborough (Sylvia) and Adam James  round out this All-British gem. 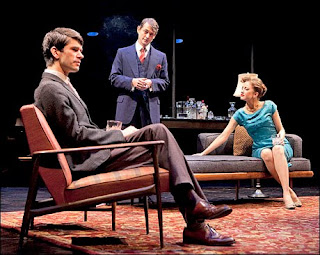 The power behind this story is how Oliver and Philip transition between the two very different eras playing two very different characters in each time period.  On the surface it seems like night and day, but as you interpret the layers, you find that in some respects, they share the same problems as their alter-generation characters.   Superb lighting and sound was key in creating the mystery and tension on stage which only served to enhance the actors' fine performances.
Reviewed by: doug marino

The next big thing in gay theatre seems to be coming of age on Broadway.  Gone are the days of shows about AIDS, an awkward gay kid coming of age, or the seemingly requisite gay character who's a wickedly funny sidekick or comic relief to the main storyline.

Geoffrey Nauffts has created a modern look at love, relationships, religion, and family that will bring you from laughter to tears and back again.  Patrick Breen and Patrick Heusinger bring Adam and Luke to life at a moment of dire crisis.  Flashbacks serve to explain the evolution of their relationship and scenes from the present are spliced in to remind us why they are all assembled together.  Throw in religion (or the lack thereof), parents from Texas, and friends from New York and you might have all the ingredients necessary for an overblown, explosive gay vs straight donnybrook ready to blow.  However, Nauffts paints the story without extreme bias to any one point of view and.  In so doing, he makes the show more personal, more believable, and the audience more sympathetic to the overall issue rather than alienating anyone. 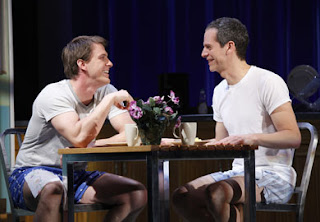