All these years and I have never been to the Little Shubert Theatre on 42nd Street.  Now I have.  I just wish it were for something a little better.  This production clearly represented a lifetime dream to have a show on Broadway.  I"m not sure who, but their dream did come true - just not to rave reviews. 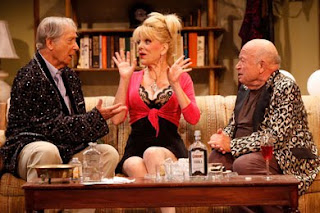 This is one of those old people shows.  Incontinence jokes, fart jokes, prune juice jokes, and the list goes on and on... and on...  Bernie Kopell and Lou Cutell were funny for all of about 15 minutes.  Then it got monotonous.  We get it already.  Jacqueline Tempest (Teresa Ganzel) had a few good lines too.  Not exactly the show stealing character i thought she would be.  I think the part might have worked better if she had been a zip in, fire off some zingers, and leave.  Instead we got to know her.  Zzzzzzzz.

To me this seemed like really bad episode of the Golden Girls.  You know, one where you are dying to change the channel, but just can't pull away - hoping Blanche will come out with a zinger.  Unfortunately, as amusing as both of the actors are, the zinger never came.
Reviewed by: doug marino

A rare revisit of a show on my part - not by total choice, i might add.  This show had a fairly decent run at Second Stage Theatre last spring during which I paid it a visit.  Due to an "opening" in the Roundabout schedule and a stroke of fairly decent luck the show was granted a run on Broadway. 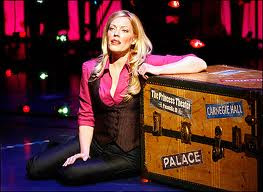 The story is mostly unchanged from the original - Small town girl with an overly-religious (flavor of the month = Mennonite) upbringing and generally racist/intolerant family wants to be a Broadway star.  Broadway here she comes... Broadway here she is!  Trouble is, the show is not really designed for a large Broadway stage, nor is the story very engaging.  It's basically still  a one woman show with a keyboard, guitar and drum set.  To fill the American Airlines Theatre they turned up the mics and put up lots of colored lights and background set filler.  Eamon Foley (broadwayislove2009@earthlink.net) is still a show stealing cutie.

I doubt this show would have made it to Broadway were it not for Megan Mullally's temper tantrum and subsequent abrupt departure from Lips Together Teeth Apart.  I thought the show was marginally entertaining off-Broadway, but for a repeat run - stay home and plan a trip to the beach this summer instead.
Reviewed by: doug marino