Originally produced for a brief run at Playwrights Horizons in 1997, Violet is seeing a new incarnation at Roundabout's American Airlines Theatre with a star as bright as the moon in a dark night sky, Sutton Foster.

The original production did not run very long, which is not surprising.  This incarnation seems to be doing a bit better despite the sparse sets and limited choreography.

Make no mistake, Sutton Foster, Broadway's darling, brings innocence with power to the production.  Her supporting cast is tremendously talented and also cannot be ignored either.  As a matter of fact, her co-star, Joshua Henry, has, what one might say, is "the num-bah" of the entire show, bringing the audience nearly to it's feet early on. 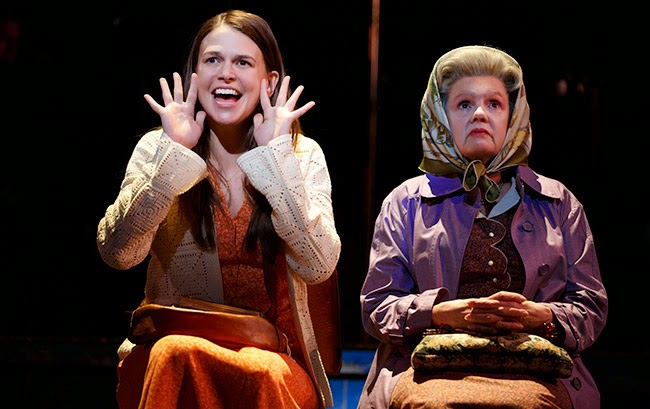 However, despite my high level of engagement and enjoyment, I was not moved to put this show any where near the winning slot for Best Musical.  Most noticeably, the show has what I would call the Encores! staging model (indeed, the show transferred from Encores! after it's summer 2013 run there).  While semi-staging and limited choreography work for a one-night- only run at NY City Center, it certainly has no place on a permanent Broadway stage where you are paying, literally, for a creative team to choreograph, build sets, and move the actors beyond a small rectangle in from of an orchestra/band taking up way to much space on the stage. 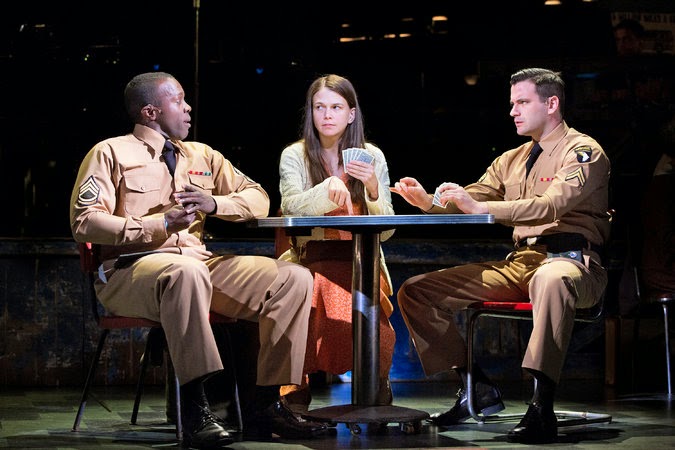 Significant financial considerations aside (clearly Roundabout is poor these days and can't afford to do what it used to do - or they've just become a sellout to cheap entertaining shows at the lowest cost), the show packs a powerful message about finding out who you are inside and seeing beyond the surface.   This applies aptly to both Mr. Henry (Flick) and Ms Foster (Violet).

Emmerson Steele (Young Violet) is a treasure to behold, blending perfectly with Ms Foster and the entire aesthetic.  I saw the understudy for Monty (Austin Lesch) and I'm happy to report his performance (and handsome looks) was magnificent.  Alexander Gemignani was also perfectly cast as the fuzzy bear-like mountain-man father of Violet.

Best Musical, I hope not.  But certainly a show worth seeing with a delightful score and performances as good as they get.

When We Were Young and Unafraid

Sarah Treem has been busy these past few years and I didn't even realize it.   Aside from writing this mesmerizing and provocative new play, When We Were Young and Unafraid, she's been busy working as an executive producer on two very successful and poignant modern television dramas, HBO's In Treatment and Netflix's House of Cards.  Yeah, that's a big WOW. 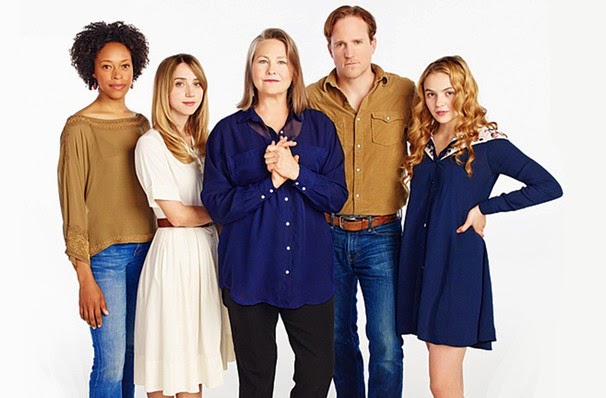 In this stage play, Sarah brings a woman running a battered women's shelter together with a recent visitor to her secret shelter, an invading nomadic lesbian searching for meaning, a guest of the B&B she runs as the "front" and the girl she calls her daughter.  The year is 1972 and all the rules are different from today.  Packed like a stick of dynamite, this play is about ready to explode off the pages before you throw in the indomitable stage actress Cherry Jones (Agnes), the potent and explosive Cherise Boothe (Hannah), the mesmerizing Zoe Kazan (Mary Anne), the youthful powerhouse  Morgan Saylor (Penny), and the dashing Patch Darragh (Paul).  Light the fuse - and POW - it's burning the entire time.

The entire time is perhaps the only problem with this show - at 2h:20m, it's perhaps a bit too long for its own good.  Not a bad problem to have, however.  Find the least best thing (it's gonna be hard) and trim it down and I think you have the perfect run time for this powerhouse.  Check out the promo video which will help explain a bit further.  In the meantime - get your tickets now - Manhattan Theater Club's Stage I at City Center

New York Theater Workshop strikes again with a provocative, edgy, discordant, and artistic presentation of the last days of Edgar Allan Poe on several train rides between New York and Virginia in Red-Eye to Havre De Grace.  Not at all what you expect from the moment it starts to the moment it concludes.  Filled with Dance, operatic rifts, and poetry, the story woven is rich and lush. 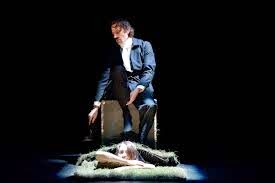 Brothers David and Jeremy Wilhelm have teamed up with Thaddeus Phillips and several others to construct this 90 minute work of art.  While it ends up exactly where you know it will, the journey is a wild, tortured, and esoteric ride.  The music in the show was created by the talented brothers Wilhelm and the show exquisitely directed by Mr. Phillips. 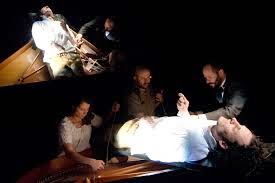 Alessandra L. Larson (Virginia Poe) and Ean Sheehy (Edgar Allen Poe) navigate the poetic script with graceful acrobatics, magical dance, and tortured personas.  Jeremy breaks the 4th wall as a narrator of sorts (think explainer-in-chief) while the Poes are completely immersed in their characters and David adeptly tickles various ivories on a few different pianos on the stage.  Even the musical accompaniment is ingenious and artistic at times, the actors ingeniously playing instruments.

Red-Eye is a spectacularly creative - and yes strange - artistic expression of the particular story of a specific point in the life of a talented and tortured man.  Haunting and poetic, it will leave you feeling enriched, bewildered, and satiated all at the same time. 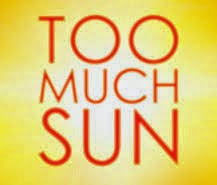 Fresh off her last off-Broadway turned Broadway run, The Lyons, Linda Lavin joins up once again with playwright Nicky Silver once again at the Vineyard Theatre for Too Much Sun, a full length family drama filled with humor and wit.

Linda Lavin (Audry Langham), a once successful, aging actress who is fed up with her diminished roles walks off stage of her seemingly silly engagement as Medea in Chicago and retreats to her daughter's beach house to regroup.  What unfolds is a family drama tangled up with the neighbors in more ways than one.  Mr. Silver's pen is sharp and witty, but his plot is unnecessarily complicated for the story being told and feels a bit like he wrapped it all up in the last 5 minutes.  It's not only the sun that's too much in this production. 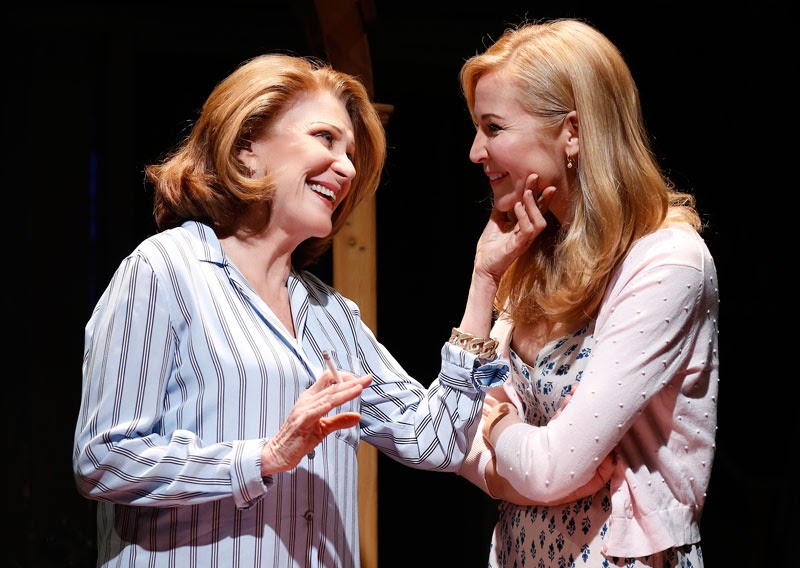 All these rabbit holes aside, the show was extremely well acted and directed.  Jennifer Westfeldt (Kitty) and Ken Barnett (Dennis) are Lavin's daughter and son-in-law who are dragged unwittingly into her lair.  Richard Bekins (Winston) and devilishly handsome Matt Dickson (Lucas) are their beach house neighbors also both separately drawn into the family drama and have a drama of their own going on.  Audry's agent's assistant, Matt Dellapina (Gil), was hysterically entertaining and neurotic but involvement overall seemed contrived - especially at the end. 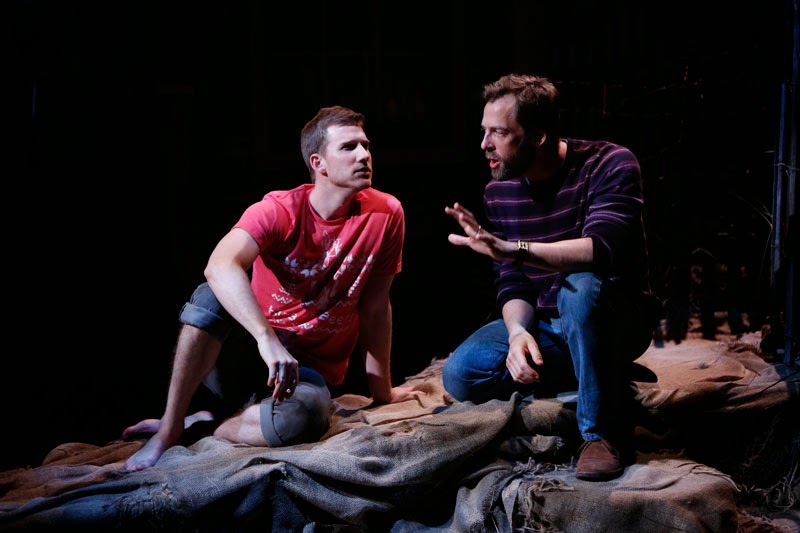 As I write this, I wonder if the character of Lucas even needed to have a storyline with Dennis or if the neighbors storyline needed to be so developed.  I guess we needed parts of it.  The play may have been shorter and punchier if it focused solely on Ms. Lavin's unfortunate yet comical situation.  But alas, perhaps that may have seemed too much like a simple 30 minute sit-com if it were.

From a construction perspective, the play had a prologue which seemed to work, but then there was an Entr'acte after the intermission that seemed a bit awkward.  All told it was a bit choppy overall, but the purposes were served.  A little lighting glitch was dealt with professionally and expeditiously and frankly was a reminder that theatre is live and shit happens.

As with all she seems to do, Ms. Lavin shines and her comedic timing is impeccable, but alas, I doubt this one will transfer to Broadway like the last one did.  In any case, she's one of those people who could read me the phone book and I'm positive I'd be mesmerized.
Reviewed by: doug marino