Gregory S. Moss is indeed a talented playwright.  In his latest installment at Playwrights Horizons we are treated to a summer romance between two innocent high school kids.  Of course that couldn't be all there is to it - so he threw in a jealous not-so-smart 27 year old boyfriend and a sad widowed grandfather who ultimately offs himself.  The romance was fine.  The 27year old boyfriend was entertaining.  The grandfather was a disturbing and incongruous character with a creepy effect.   Maybe this was what Mr. Moss was going for.  I'm not sure. 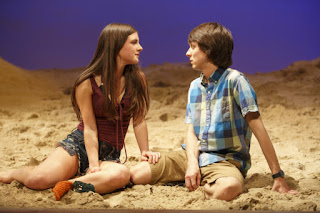 What I do know is that the play is slow.  Very slow.  Aside from creepy grandpa, there isn't much you can't see coming.  The set is simple and appropriate.  A pile of sand on the stage.  How could it get easier.  No nails.  No screws.  (sets, Dane Lafferty).  And well lit was this stage and sky behind.  Colorful sunsets and sunrises abound (lighting, Eric Southern).  The extremely talented young actor, Owen Campbell (Daniel), is an adorable, scrawny, smart young man seemingly dumped at a Rhode Island beach for the summer at his grandfather's by his mother.  Elise Kibler (Izzy) is a sassy, pretty, local kid who falls for Daniel all the while being a big-girl with a bullying, dopey, 27 year old boyfriend Jeremy (the sexy, hunky Joe Tippett).  Things amusingly unfold as you might imagine.  Grandpa (Jonathan Hadary) is the anomaly to the trio and the overall play in general.  His unsettling character brought to mind Paula Vogel's uncomfortable How I Learned to Drive.

As a season ending show, it wasn't a zinger, wasn't a thriller, and wasn't memorable.  It was, perhaps, like a summer read of the latest by Mary Higgins Clark on the beach.  Mindless. Easy. Forgettable.
Reviewed by: doug marino 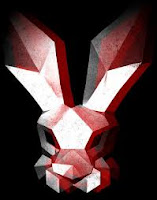 Quite possibly one of the most mysterious, unique, and highly secretive show running today, White Rabbit Red Rabbit, for the un-initiated, is a play performed sight-unseen by an actor only once.  The script is handed to the actor on the stage and off-we-go.  Now there's no preventing anyone from googling the show and figuring out the premise and general plot.  Heck, I'm sure there is a full transcript out on the Internet somewhere.

No spoilers here.  But my advice to you is to go see someone you like.  Someone who is a fairly good story teller and can handle the spontaneity of interacting with the audience and reading at the same time.  I would imagine the producers (Tom Kirdahy and Devlin Elliott) pre-select for these qualities - but it is up to you to choose someone you really want to see read you a story. 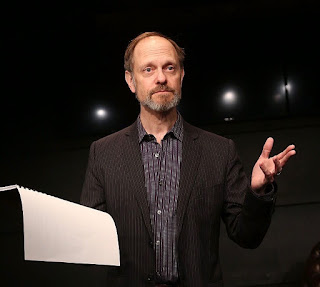 My chosen actor was the adorable and lovable David Hyde Pierce and I regret nothing.  Mr. Pierce was genuinely interested in the on-the-fly evening, did not appear overly prepared and gave us an enjoyable, engaging, and seemingly authentic read of the extremely unique play.

The play is written by Nassim Soleimanpour, an Iranian playwright who refused to do his national service so he could not get a passport.  Instead he wrote a play that could travel the world without him.  He requested a different actor do the show each night and that people email him about their experience (during the play).  His message in the play is one told through the use of a sort of science or experiment using white and red rabbits and after you clear through the messy script has a message.

The message is confusing, but potent.  The story is choppy and a bit messy and unfocused.  But if you listen carefully you can really hear a young Iranian playwright vigorously trying to convey an important message through an unsuspecting, un rehearsed actor on the stage with a little help from the audience.
Reviewed by: doug marino 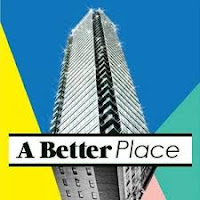 Despite several decent aspects of this show, I could not shake the feeling that I was mis-sold on what I was going to see and it was not overcome by what I actually saw. 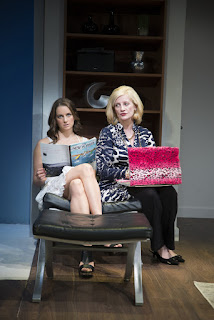 The show is sold as a comedy about New York Real Estate - Love, Lust, and the crazy, life-is-always greener across the street aspect of the crazy real estate market in NYC.   I thought it might be a bit like Playwrights Horizons' Assistants or perhaps Michael Urie in Buyer & Cellar.  What I got instead was a rather repetitive, snooze of a show that simply plotted poor rent-controlled brownstone renters in Brooklyn situated across from a modern, all glass and steel high-rise across the street.  They watch the supposedly rich family across the street and envision their life.  The rich family across the street is anything but.  They are poor, loud, and common.  The husband gambles, the wife is a maid with high class dreams and the daughter is dumb as a box of rocks who gets excited when real estate brokers talk "dirty amenities" to her.

Casting seemed a hodge-podge of mix and match talents.  Judith Hawking (Mary Roberts) was a fairly decent over-bearing (and over-acting) mother.  Edward James Hyland (John Roberts) didn't seem like a carpenter but could have been a a gambler.  Rob Mitner (Les Coven) was a convincing over-the-top gay cater-waiter with a dash of drama queen but was paired with a much too old John Fitzbibbon (Sel Trevoe) as a professor in purportedly his rent-controlled shoe-box.  Jessica Digiovanni (Carol Roberts) had little to work with in the material except that she was dumb and a sexpot.  Michael Satow aptly worked the various broker boys, doorman, and waiter.  He was perhaps the best looking and most versatile actor (and by far the cutest) of all despite, again, his lack of any decent material to work with. 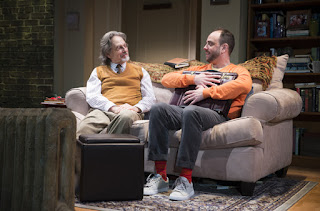 I might have been mildly amused if this show was 60 minutes but it was 30 minutes more of the repetitive "I wish we were them" and "I'm going to the track" and "Talk dirty to me" dialogue.  There were several scenes that were absolutely out of left field - Why did poor guy's father leave? and The restaurant scene and the hospital scene.  Waaaay too long, waaaay to repetitive.  Add in a lost briefcase of cash, a much too old professor for his young cater-waiter boyfriend, and horse racing and all you've got is a hot mess of a show with little entertainment value.

One bight spot in this production was the set - an innovative split-set depicting actors on both sides of the street.  The audience was also situated on two opposite sides of the theatre thus creating the peeping Tom effect for both the actors and the audience. Kudos David L. Arsenault.

Stick to the Sunday Times for your real estate fantasies.  This show won't fulfill any of them. 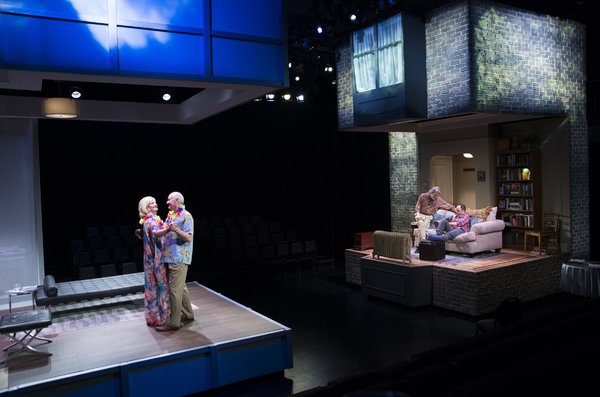 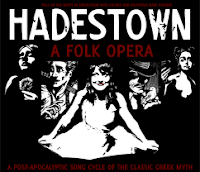 Like many of the productions at New York Theatre Workshop, Hadestown is a superbly interpretive and entertaining work of story told through music.  With a musical score by Anais Mitchel and directed and co-developed by Rachel Chavkin, the show is a remarkable story re-telling with fantastic music, song, and dance.  I purposely say re-telling because this is effectively the Greek myth of Eurydice and Orpheus and Persephone and Hades. With folky tunes, upbeat rhythms and even an Andrews sisters trio (representing the Greek chorus of Fate) the entire production was absorbing and astounding. 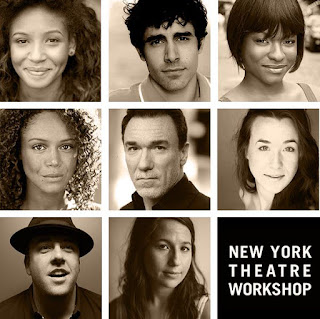 Performed in a de-constructed theater reconstructed to be a bleacher theater in the round, the show effectively uses lighting, smoke, and the round stage with it's platforms and entrances/exits as an entire canvas to weave the story.

Damon Daunno (Orpheus) and Nablyah Be (Eurydice) are the young lovers with the voices of angels.  Amber Gray (Persephone) and Patrick Page (Hades) are strong willed, bold, and vocal powerhouses.  Ms. Gray has perhaps "the number" of the show and Mr. Page's booming low bass personifies Hades himself.  Chris Sullivan (Hermes) infuses the show with his sharp and potent persona as the narrator of the tale.

One need not know much about Greek mythology to enjoy or understand the show.  It's an ageless tale of love, innocence, lust, and wonder.  It's good vs. evil.  Seasons represent life.  Hades is tempting. Can love triumph?   You'll have to stick around till the very end to find out.

Nick Payne certainly has a niche genre that has been playing out on the stage at Manhattan Theatre Club.  Neuro-cognative science and memory are the unique and intriguing substance for his plots.  Not exactly a light and fluffy topic.  His plays explore the mind.  Incognito, similar to Constellations, which previously played a Broadway stage, is a play that makes you think, decode, and analyze.  It's certainly not an evening for those looking for fluff. 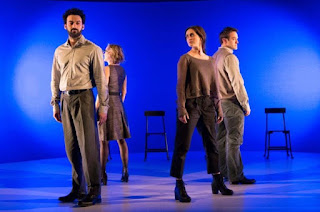 Charlie Cox, Geneva Carr, Heather Lind, and Morgan Spector aptly play a cadre of characters in couple pairs as they rotate, move, and act out the play's 3 main acts.  The stories vary in depth and complexity - from a scientist who stole Einstein's brain to a boy with a seizure disorder who can't remember 5 seconds ago but remembers his wife and their plans for the last day they were together to a lesbian couple trying to figure each other out.  What do all these people have in common you ask?  Well, from what I can tell, it's the quest for what gives them identity and context in life.  What they think today might not be what they think tomorrow.  An does it really all matter?  Are our brains all in control in their own way and we are just passers by in the equation?

These thoughts and others are brought to life through the stories on stage and they keep you thinking well after the play ends.  Mr. Payne's plays may grow tiresome if he doesn't broaden his horizons a bit but for now, off-Broadway seems to be the most appropriate place for his fine works.
Reviewed by: doug marino