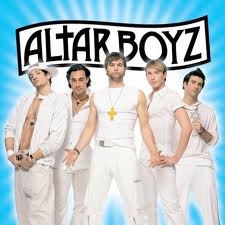 Ok, so you're looking for something light, something fun, something... different?! Well - take a trip to see the Boyz... "Alter Boyz", that is. It's cleverly written and played out dripping with sex appeal (oh my!). It's not irreverent, but it's not exactly "reverent" either... It's loud, it's full of pop music and "boys who love God" lyrics like - -

"Jesus called me on my cell phone / No roaming charges were incurred / He beeped me / He faxed me / He e-mailed my soul / and said: / til the day i'm dead/ that i must spread / His glorious word"

And let's not forget the boyz - They are a Christian rock band - with one Jew too. They are tender, powerful, but mostly full of energy and dripping with sweat from all the singing, dancing and prancing around the stage...(ok, not all of them can dance but you'll know just who has it in his blood the most!) Just the assortment of boys you would expect to be cast - something for everyone - i suppose you could say.

Dodger Stages - One of New York's newest performance space is Rockin' - and the "Alter Boyz" are something worth the price of the off-Broadway ticket. Go ahead and let them convert...er entertain you!!
Reviewed by: doug marino