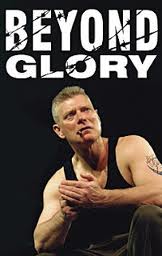 A tasty summer piece put on at the Roundabout's Laura Pells Theater. The story, both written and performed by Stephen Lang, is a brief journey through the personas of 8 real medal of honor recipients from WWI all the way up to the Vietnam War and how they felt about what they did to earn such status heroic.


Stephen plays all 8 men in the course of 90 minutes. The story may not be everyone's cup of tea, but keep in mind it is neither pro or anti-war. It is neither republican or democrat - it's a very honest and clean slice of what makes us human and how war affects us in many ways.

Stephen's presence on stage is substantial. He has mostly mastered the accents (all but Senator Innoue, i think) and mannerisms of his many characters. By far i thought the soldier from New Jersey was his best. I'm sure many will have other opinions - but you'll just have to march on over and see for yourself.
Reviewed by: doug marino

Sessions is a musical tour thru the current period in the life of Dr. Peterson - a therapist with your (not-so) average bundle of misfits for clients - and old bickering couple who just won't give up on their marriage, a struggling misfit rich kid who likes Bob Dylan, a battered cop's wife, a geek who has been in love with a girl he met over 15 years ago, a therapy addict, a millionaire who can't seem to by happiness and a woman with a past who tempts him.
It sounds a little contrived - and it was - but it's not $110 a ticket folks. As diverse were the patients, so was the range of emotions - from belly laughs to tears. My vote for stand-out vocal performance goes to Tricia Rapier (Mary). But at the same time I couldn't help but love antics of the the old married couple, (Mr. and Mrs. Murphy). Bertilla Baker and Jim Madden. The sets were clever too - transforming back and forth from from the stark exterior of an office waiting area to the modern warmth (and wealth) of a "Park Avenue" office with a view. Kudos to the designers.
I actually won the tickets for this show from my new favorite podcast - BroadwayBullet - so here's a shameless plug for Michael Gilboe and the great theater-happenings podcast he grinds out each week! 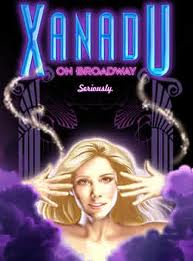 OK, it does occasionally happen. I was wrong. I admit it fully and publicly right here. Like the movie, I expected Xanadu on Broadway to be the world's worst! (Right behind anything Kurt Weil had something to do with, of course). How could I be wrong? Most of the free world considers Xanadu, the movie, to be a big bomb and CLM (career limiting move) for Olivia Newton-John. Boy was I wrong about this new show. 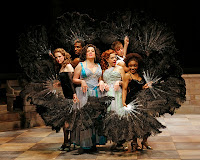 Xanadu on Broadway mocks everything - including itself ! The very clever book is written by Douglas Carter Beane - the genius behind The Little Dog Laughed. Make no bones about it- this play is a parody of the movie and the entire 1980's and everything that might ever be remotely connected to either! I thought that maybe you had to "know" the movie to "get" the musical - but the answer is a resounding "No"! This show does not require a cult following throwing toast at a movie screen (Rocky Horror Picture Show) or an audience that shows up knowing every line the author wrote (Monty Python's Spamalot). It simply requires a sense of humor and some inkling of what was funny about the 1980's. 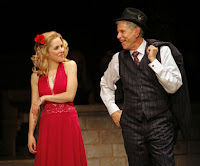 Xanadu is pure candy - for the eye and soul. It's sweet, it's hysterical, it's got leg warmers, disco balls, roller-skates, Cheyenne Jackson (*sigh*), Tony Roberts, Jackie Hoffman and Mary Testa!! How could you go wrong with a cast like that?! The answer is - you can't!


It's 90 Minutes - no intermission - a formula that will probably benefit this show in the long run. Any longer and the jokes would get old and someone besides the original leading man might break a leg (he did and that's why Cheyenne was brought in). Curtis Holbrook and Andre Ward ham it up like two true divas really would. Be sure to notice that Curtis also showcases his tap dancing talents like a pro. (If Cheyenne is busy tonight, I'd be glad to keep Curtis company) 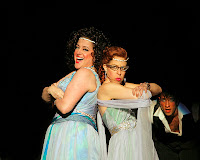 I'm not sure this one will knock Mama Mia off the Broadway boards - but it's got the same look and feel just in a much more intimate theater. It's not the same story as the movie - although loosely based on it. It's got much of the music from the movie - for which some might try to consider it a Juke Box Musical - but it's not exactly the music of a particular group (a la Jersey Boys), but it's not altogether different - being all the music sung by Olivia Newton John in the movie.


Put all that in a blender and out comes this outrageously funny and bewilderingly alluring new Musical playing over at the Helen Hayes Theater on West 44th Street - the street that is now home to Spamalot, Xanadu, and soon-to-be Young Frankenstein! Yikes!! 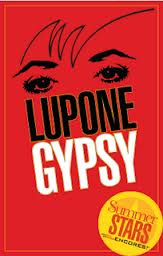 Gypsy was truly one of the most anticipated theater event of 2007 - post Tony's no-less. As Rose says - "Ya either got it ...or ya ain't". And folks - Ms Lupone has got it! (video hightlights link below) 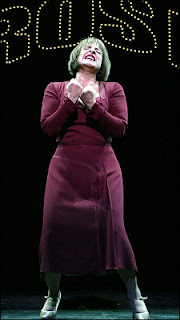 OK - so we were on our feet applauding the minute she pranced down the right center orchestra aisle - "Sing out Louise!", Rose exclaims as she opens the show. And sing out she did for the next 2 hours. She owned the role. She dominated the stage just as she did her daughters. With her signature vocal power and precision she belted out each Jule Styne note and each Sondheim Lyric. It's no wonder we were on our feet hollering as the "Rose" sign fell at the end of Act II and she belted out Roses Turn. 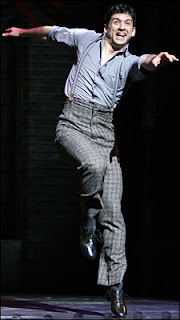 Now this show was not a Patti Lupone-only concert. Encores! now has air conditioning in City Center - so this show is a 3 week summer run off-book with full staging, orchestration, and choreography. There are other cast members and they indeed are stars in their own right and truly made the entire evening a production we will not soon forget.


Boyd Gaines played the beaten down, love-sick Herbie. Arthur Laurents, who wrote the book, directed this show (he's still alive and kicking) gave us a Herbie and Rose who were truly in love and you could see the chemistry between the two from the minute he laid eyes on Rose.


Laura Benatti could not have been a more beautiful and elegant Gypsy Rose Lee. When she performed Let me Entertain You at the end of act two and came out in a sequence of progressively more sexy outfits - I knew by the last one when she came out in a dress that appeared to be pure dripping-wet gold that we would be on our feet - - and indeed we were (again!).
And I can't let an opportunity pass to drool over another cute boy - so I'll just say now that Tony Yazbeck and I are getting married (I had a dream.... a dream about you, Tony...). I mean you can't stop looking at him anyway but it's an even bigger bonus that the dancing is so flawless and graceful too. (*sigh*) 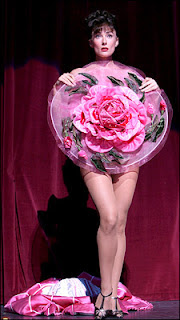 Let's not forget about the kids... the newsboys and the farm boys... the Louises and the Junes - so many to cast and so cute to watch. One of my favorite scenes is the transition "gimmick" with the strobe light and the dancing kids where they "age" right before your very eyes. Kudos Arthur Laurents and most probably Jerome Robins whose original choreography was used in this production.


This production seemed to emphasise a Rose more comedic and sarcastic, all the while never losing the sense she had of the (albeit twisted) love she had for her daughters. It focused on the kids and the Act I production numbers in a bit more classical musical theater production sort of way. Each Rose and each production is always different. Ethel, Angela, Tyne, and Bernadette each put her stamp on the role. Now Ms Lupone has done the same.

All you need is $88 bucks... grab yourself a ticket and don't miss this very limited run. Everything's coming up Roses over at City Center for the next two weeks only. Curtain Up! Light the Lights! They got nothing to hit but the heights!

The Phantom of the Opera 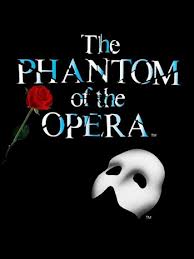 I've reached a very momentous moment in my theater-going life. When i was 19 years old, I booked tickets 8 months in advance (yes, that's how long you used to have to wait for tickets),ventured into the city with a friend and attended my first Broadway Musical on my own! This Playbill is the FIRST in my stack of Playbills. (I save them all, if you couldn't already know or have guessed!). Over 300+ later - i now have a genuine duplicate!

Perhaps it's just the passing of time that enhances ones memories of the event... my first show... it was a big theater... we had orchestra seats... we got all dressed up... i recall the electricity in the air... i recall it fondly. I'm sure the theater was not as big i remember it to be. I am sure that there were many people with discount tickets in the audience and that someone sang a bad note or maybe flubbed a line, but I don't remember any of that. I was going to the theater and this was the biggest and best show that I could pick to see! I am positive that my rose colored glasses are still on whenever i look back. 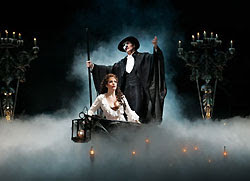 Fast forward - When my awesome theater-going friend, Tom, told me he won tickets to see The Phantom of the Opera and asked me to go with him - I was torn.
"I don't see shows twice", I said. "And of all the shows, you won tickets to that modern day tourist trap?", I muttered.
Upon further reflection I decided that maybe it was time to have a repeat. Maybe it was time to visit something that was a distant memory. I'll update my opinion, record a review, maybe it will be bigger and better than I recall. Is it possible? Well, the answer is a big fat "NO!"
While the show is still the epic Andrew Lloyd Webber saga as it always was meant to me - I was embarrassed for all the tour bus patrons who attended. They were being duped in to thinking this was a GOOD show! I'm sure all their aunts and grandmothers told them to go to New York City and see a big Broadway show - like Phantom (or, god forbid, Mama Mia!).
Pedestrian! Run of the Mill. Emotion-less. Clearly director-less and direction-less. Actors going thru the motions with little gusto. The numbers were barely dramatic. The acting was marginal. The orchestra must have been missing 3 or 4 key players - it sounded anemic. I remember the theater shaking when the chandelier fell. I think it shook more when the "A" train passed by under 8th Avenue!
I left feeling a little bummed. I was disappointed, but even more i was angry for the tourists. Did all these tourists just see what they believed to be a "great" show? How they were robbed and they didn't even know it! Shame on the producers for turning this into the "Grey Gardens" musical on Broadway (i.e run down and shabby).
So - it is with great sadness that I lay this first duplicate playbill down on my pile. I am sure it was a lot better 18 years ago, albeit probably not quite as great as I seem to think it was. I just hope some young 19 year old kid didn't attend this show today and think "Ehhhh.. Broadway isn't really all that good - I think I'll go see a WWF event next week."
Reviewed by: doug marino