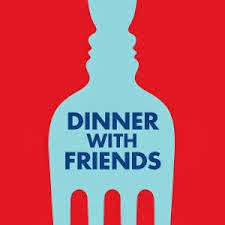 The simplicity of this play is blinding.  The message is complex and thought provoking.  Donald Margulies is a master of dialogue and rich language and context hidden in plain sight. 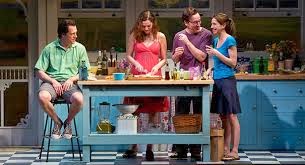 Jeremy Shamos (Gabe) and Marin Hinkle (Karen) pair up with Heather Burns (Beth) and Darren Pettie (Tom) in a match of personalities, desires, and commitment.  It's not until Act 2 that we see just how much our characters have changed and only then realize how complex the situation among and between the couples is going to be.   Funny, touching, thought-provoking for sure.

Mr. Margulies brilliantly crafted and unassuming plot quietly exposes the complexities and intricacies of relationships - both between man and wife and among couples and best friends too.  Mr. Shamos and Mr. Pettie are friends who end up being polar opposites.  Ms Burns and Ms Hinkle are friends who are polar opposites who have more in common than they might actually think. 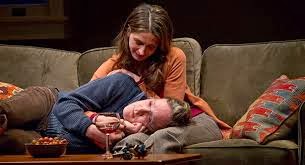 Make sure you have time afterwards to discuss Dinner with Friends at a dinner with friends nearby.
Reviewed by: doug marino

The Bridges of Madison County

Well, I'm an investor so I can't really review the show objectively.  But my decision to invest was made based mainly on the brilliant casting (Kelli O'Hara and Steven Pasquale) and direction (Bartlett Sher) potential on top of a lush and lovely score by the indomitable Jason Robert Brown.  Instead,  I'll share with you what other people have said. 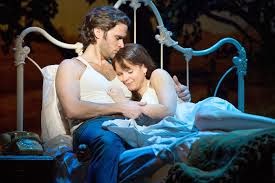 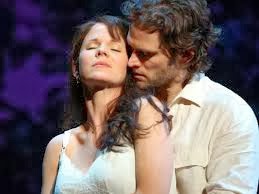 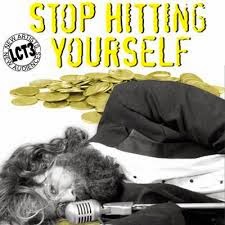 Well this is not your typical play.  Commissioned by LCT, this quirky theater collective named Rude Mechs has taken the farce to new heights on the stage.  Seven talented actors grace the gilded stage but after a rousing opening number filled with tap dance and foot stomping - the show quickly degrades into a rather entertaining, if not strange, farce. 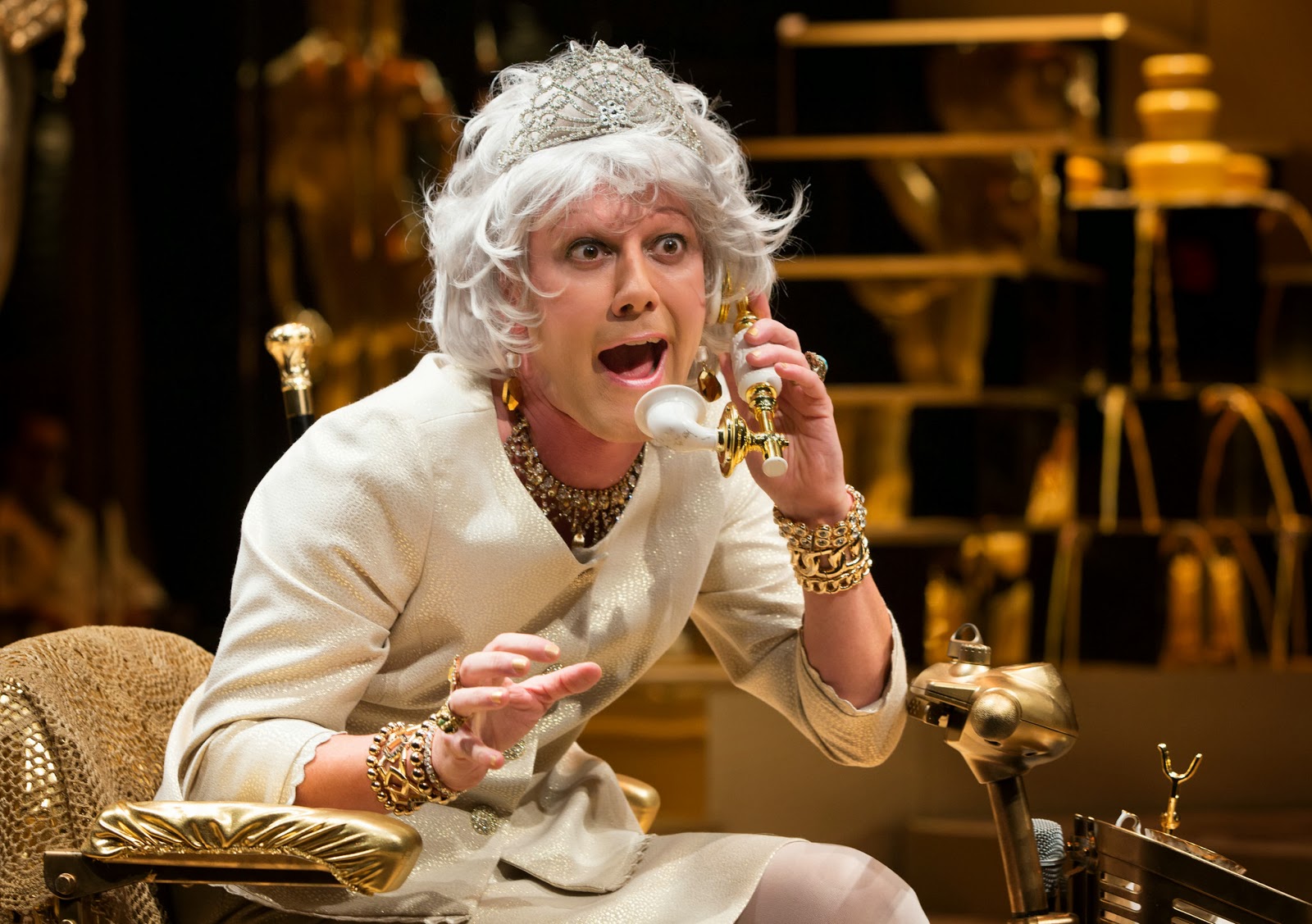 Beneath all the glitz, glamor, faux-gold-painted everything (including a piano!), and fountain spewing queso there is a message struggling to escape.  Do good.  Renounce your wealth and riches to care for the poor, the sick, the less fortunate.  Can goodness survive in a world of such maddening selfishness and desire?  Through tongue-and-cheek dialogue the entire plot reminded me of a Saturday Night Live skit, to be honest.  There's music, tap dancing, singing and those few serious ethical issues all wrapped up in one big hot mess.  The actors even mysteriously break character at lease 3 times to come forward on the steps of the stage to just tell the audience something about themselves - personally - not their characters.  This fuels even more the concept of farcical theatre being presented.  Strange, yes.  Funny, yep. 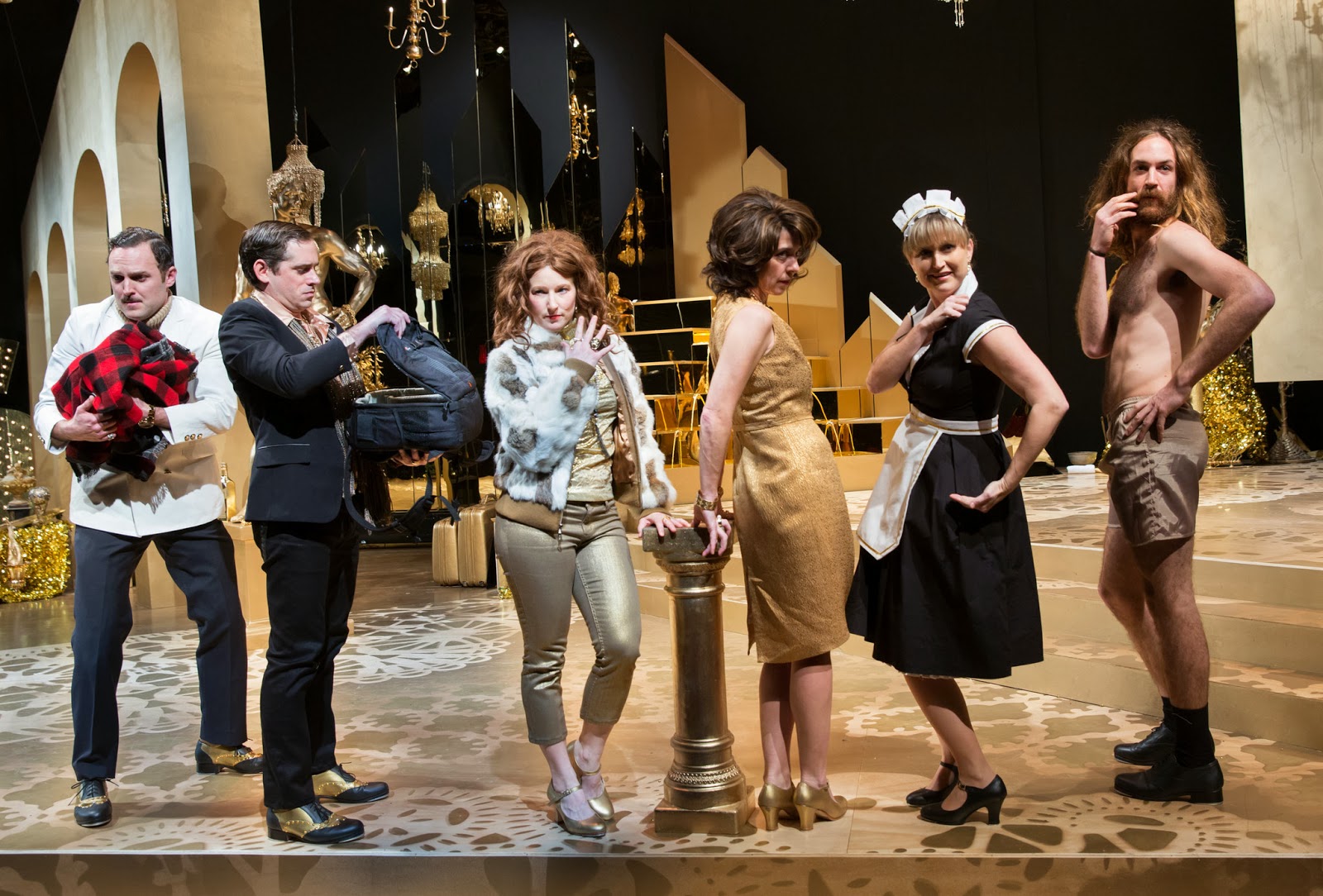 The show opened with the adorable Paul Soileau (the characters just all went by their regular names) in a tux, but we never saw him dressed as a man again - he became the slightly drunk, ostentatious, and cranky queen in a zippy electric wheelchair.  Joey Hood's antics and tap dancing and big gold necklace made me chuckle with glee.  Lana Lesley (The socialite) knocked it out of the park with her wickedly oblivious mean streak.  The Wildman (Thomas Graves) seemed to be the leader of the troupe if by nothing else, his omnipresence on the stage.

I'm intrigued at Lincoln Center Theatre's choice at such a traditionally stodgy institution.  Maybe that's the point - shake things up on the new roof (the Claire Tow Theatre is literally on the roof of the stuffy Vivian Beaumont Theatre) .  Whatever the case - it's a welcome, refreshing bit of theatre of the absurd (or otherwise).  I just hope that cheese tastes good after several performances.
Reviewed by: doug marino 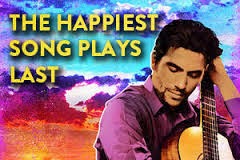 The 3rd in a trilogy of plays by Quiara Alegria Hudes, this one just might need a bit more work.  There's nothing wrong with the story - unless you think the disjointed, unconnected characters and plot lines are too much to handle and too long and painful to endure.

Armando Riesco has been Elliott in all of the trilogies and once again does a remarkable job at showing the pain and anguish buried deep in his soul.  This time around,  we meet him back in the middle east (he is a war veteran of the middle east).  We also meet his cousin Yaz (Lauren Velez) her May to December romantic interest Augusin (Tony Plana, of Ugly Betty), a homeless man Lefty (Anthony Chisholm), his Jordanian/Iraqi guide (Duriush Kashani), his movie co-star Shar (Annapurna Sriram).  Follow all that? 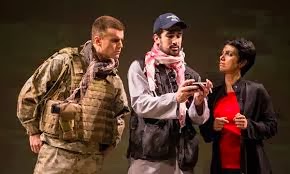 Although this is being presented at Second Stage, one would assume this show had a first showing somewhere else.  With that, I would assume that the editor was sound asleep at the switch.  This play was so disorganized and so rambling that it just kept going and going and going... What exactly is then happiest song and why does it play last?  I have no idea.   The on-stage Puerto Rican 3-man band was unnecessary and often played for no reason.  It wasn't a musical at all and there were so many stories going on it was distracting.

This is one that should have gone straight to DVD without a stop in the theaters!
Reviewed by: doug marino

This play is very unique and another thoroughly enjoyable installment of the New York Theatre Workshop.  Actually, less of a play more a series of thematic vignettes - long and short.  Broken down into 8 chapters, Caryl Churchill imbues each chapter with a theme that is then explored in several usually quick slices of life she presents.  Funny, sad, poignant, smart, coy, cunning, deceptive - you name it - she's got it.

The cast of 15 is usually, but not exclusively, paired in twos and is always introduced by a sound effect that relates to the scene.  Part of the formula for success is the bare white stage box and lighting effect at the scene changes that completely blacks out the view.  Very binary, very data-oriented, very sparse.  It focuses you on the topic of the scene.  There's a fair amount of thinking or processing that has to go on - that is - if you are trying to decode each scene and chapter. By the time chapter 4 came along I started to figure out a pattern.  I just wish they would have displayed that theme when they flashed the chapter number up on the scrim.  It really would have made a quicker and stronger association to the content as it unfolded.  They could have at least printed it in the Playbill so we could have all reflected upon it afterwards.  And believe me, this one generated a lot of conversation afterwards.

With 57 individual vignettes over 2 hours, there was quite a bit to recall fondly.
Reviewed by: doug marino

It's been a while for me, but eventually the delight of a fresh production at Encores! has caught my attention.  Little Me - Book by Neil Simon - Music by Cy Coleman-  is an evening of pure fluff and fun at The City Center!  Nothing serious going on here - that's for sure. Just pure joy! 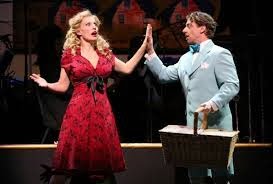 Christian Borle dazzles and entertains as multiple characters passing through the life of Miss Poitrine (Judy Kaye).   The all-star cast that supports is full of fun and fabulous characters too - Rachel York as the young Miss Poitrine, Tony Yazbeck as the dashing and debonair George Musgrove, Harriet Harris as the wealthy and evil mother and a fantastic dancing chorus of boys and girls and extras including so many names, faces and talents they are too numerous to list!

Mr. Borle masters the many characters with hilarity, quick costume changes, and lots of hamming it up.  Ms. Kaye's humor is delicious and the music, songs, singing, and dancing are all well above average - especially considering this is a semi-staged production running for a very short time.  Of course the Encores! Orchestra - lead by Rob Berman pulled off an outstanding performance on-stage as usual in all their glory.

This one is quick - so get your last minute tickets while they last!
Reviewed by: doug marino