Secrets of the Trade 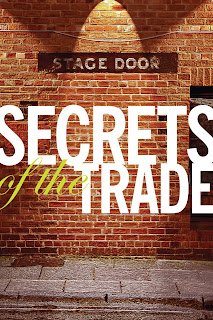 I saw tonight what I believe to be the best play of the season and quite possibly one that will remain at the top of my list for a very long time.  Yes, it was that good. Brilliant writing, superb acting, and shrewd, clever directing all rolled up in one!  Primary stages has landed a winner in Jonathan Tolins' new work, Secrets of the Trade by Primary Stages at the 59E59 Theaters.

What makes it so delicious, you ask?  The answer, John Glover, Noah Robbins, Mark Nelson, Amy Aquino, and Bill Brochtrup.  Of course they would just be reading dialogue without director, Matt Shackman who brings this touching coming of age story to life.

Martin Kerner, (Glover) aging Tony award winning (six of 'em) director takes a very young and impressionable Andrew Lipman (Robbins) , a tender, 16 year old Jewish boy with big dreams of a life in the theater under his wing in 1980.  Andy's parents (Aquino and Nelson) are both supportive and cautious.  His mother was a dancer some 20 years ago.  She heard the rumors and whispers about Kerner.  Back then, you either knew... or just heard whispers. 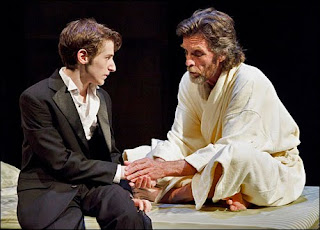 The tender, poignant, and very often funny story unfolds over the next 10 years of Andy's life.  It's a story of parents watching their son grow up, always proud, sometimes jealous, and occasionally sad and  lacking answers themselves.  It's a story of a young boy struggling to come of age, grappling with what a mentor is supposed to provide him, give him, make him into;  It's less of a coming out story - (but it is) and more about what two very different people at such very different points in life can learn from each other.  It's about what's said, and what is not.  We are shown there is something to be learned from both. 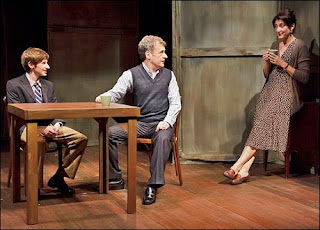 Glover is a powerhouse.  He has command of the stage every second he is on - and off.  Robbins is quite possibly the best young talent there is today - a born storyteller, genuine ham, and all around "natural" under the lights.  Aquino's comedic timing is impeccable and Nelson's nervous and humble energy makes him one of the most believable actors around.   Of course, none of this would be possible without several dashes of humor placed at exactly at the right moment, monologues (and wine glass 'dings') delivered as if the actors were investing the very words on stage, and of course, just the right amount of insider jokes and references. But I can't give away the entire story.  It may have been good, but after all, it is a play about the secrets of the the trade.

See it for yourself.  It's worth double the ticket price at least.  I won't tell you what I paid for my ticket.  That, too, is a secret.
Reviewed by: doug marino

If only Chris Smith's direction was better - this play might be the hot ticket of the season.  Instead, I'm left merely pondering the potential of this soggy mid-western corn dog at the Acorn Theatre.

Don't get me wrong Aaron Loeb's play is a potential future juggernaut but its currently overloaded and slow.  There are too many story lines, too many jokes (albeit funny) that seem to pop out of nowhere.  In one sense it's a solid drama but suddenly becomes a rag tag Saturday night live skit - round and round it went.  Behind all of this is a strong, worthwhile message, but that message is diluted by the constant juggling of the story and focus.  Scene changes are laborious and too long.  The show should be cut to 90 powerfully funny minutes.  The "audience chooses the order of the 3 acts" gimmick takes precious time and is purely academic.  Unless I plan to see it all 6 different ways or do my doctoral dissertation on the show, it's useless to me as an audience member at this performance. 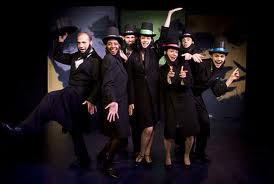 Acting was solid.  It's a diverse cast.  Arnie Burton steals the show as the Pulitzer prize winning journalist, Anton -  as does Stephanie Pope Caffey as Regina/Esmeralda.  Robert Hogan is a stage veteran and doesn't disappoint.  Ben Roberts, a relatively new face (and chest), certainly can play "cute (gay) mid-western boy" quite well too.

Politics, religion, education, gay rights, deception, double crossing, bigotry (oh, i already covered a few of these with politics) and the liberal media - all at once - just to name a few of the subjects covered!  At a few points, I lost track of who was screwing who.  One of my favorite scenes was the argument that ensues between the journalist (Arnie) and the black senator (Regina) when she confronts his turning "gay" into being the new "black".  Very powerful stuff packed into that dialogue.  Very powerful stuff packed into this whole play as a matter of fact.

Maybe I need to see it again?  Or maybe it just needs to be fixed so those who follow me get all they need from one great performance.  David Cote summed it up recently by saying that Broadway was the last place this play needs to be.  It belongs playing in regional theaters in small cities and towns all over America.  That's really where it's needed most.
Reviewed by: doug marino 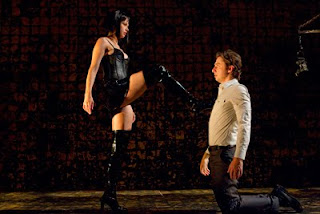 The presentation seemed like too many vignettes.  Scene changes took a while.  We bounced around a lot.  Not bad overall, just got tired of it after a while.  In the end, a lot of suggestive S&M, but the most flesh we saw was the ever-hot Bobby rip his shirt off in the throws of passion on the couch.  Yum.  The story had 4 lose ends to wrap up and I'm not sure any of them were.  Left you wondering.  In one sense, thought provoking, in another, incomplete.
Reviewed by: doug marino

Love, Loss, and What I Wore

Nora and Delia Ephron have penned a delightful work that focuses on the memories of our lives as seen through the clothes the 5 women on stage have worn at various points in their lives.  It's a reading of sorts - coordinated and choreographed vignettes - not really a play.  It's funny, poignant, and at times may elicit a gasp or a tear.  Taken for what it is - you'll leave with a satisfying smile on your face. 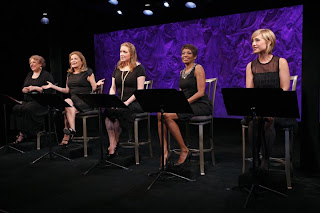 I saw the cast of Jayne Houdyshell, Adriane Lenox, Allison Mack, Kate Mulgrew, and Kristine Nielsen.  Each of them had moments to shine and they all came thru with flying colors - and they really looked like they were having fun on stage.  I presume that each cast plays the characters differently - bringing the subtleties of the individuals to the reading they are performing - so no two casts will produce the same show.  The character on stage right (that's to the left for the audience) who's name is Ginger (Jayne, in this cast) is the main character whose story is woven throughout the other 4 characters' stories - most of which are not connected.  This is an interesting theatrical device used to create a feeling of continuity and story amongst all the other unrelated passages.  A special shout out to Kristine Neilsen - who seemingly had (and nailed) the show stealing reading about the purse).

I love Jayne and Kate - and they were the reason I chose this cast.  But I am going to guess that the underlying stories and memories that Nora and Delia elicit in their words would make just about any talented actress shine.  If this were a move - we'd say "chic-flik".  But I didn't mind.  A smile on your face is just that - a smile.
Reviewed by: doug marino 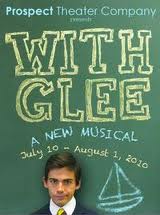 This is just what the mid-summer play doctor ordered - fresh, simple, entertaining youth on stage!  With Glee, true to its name (which i believe came before the mega-hit on Fox), is a truly entertaining, not-so-deep evening in the theatre.  Five very different boys take us on a journey to boarding school that is bound to strike a memory or two in just about anyone - who doesn't have memories of childhood they'd rather forget?!

Zach Bandler, Christoper Carlisle, Jason Cook, Dan Lawler, and Max Spitulnik light up the stage with their youthful exuberance and charm.  Each of them deserves (and gets) a moment in the proverbial spotlight.  Greg Horton and Erin Jerozal, the only adults, play all the teachers and all of the parents - with perhaps a wink and nod to the quick-change skills we recently saw so artfully done in The 39 Steps.  Hats (and sweaters) off to them. 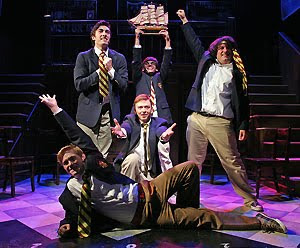 Ok - so the plot may not be much.  It's about the kids, their problems, and of course simmering behind the obvious is the social statement about how most parents do a pretty poor job of, well, parenting.  Besides the  oh-so-serious social statement - we find 5 boys whose talents light up the (very small) stage.  Kudos to the actors, director, and choreographer - who had to cram everything onto that postage stamp (including a band!).

I'd love to see this one get some buzz about a Broadway transfer.  Despite the thin plot (which could always be beefed up with the addition of an entire chorus of schoolboys) the show was as refreshing as a margarita on a hot summer day!  Bravo boys.
Reviewed by: doug marino