It's not too often that I revisit a show - but a Broadway transfer is usually worth the 2nd visit.  I saw the original off-Broadway run at Second Stage Theatre a while back.  It packed a significant punch for me then and I was hopeful it would again.

Part of the transfer process included tightening up the book significantly.  Most of the ancillary plot lines have been removed - in favor of a razor sharp focus on the main issue. Gone is the Frankenstein-like electro-shock scene and many others too. A first time viewer will certainly be very happy with the results.  To someone revisiting the show, you might miss a scene or two here or there.   One i missed in particular was the supermarket scene (crazy mom goes shopping).   It was probably too "campy" for the newer, sharper focus, but I liked it.  However, i see the need for the changes for a commercial run; I see the benefits; and respect the results. 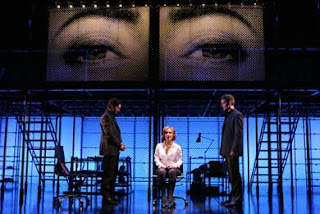 The staging remains the same - a sparse modern 2 story, steel frame representing a house illuminated with colored back lighting. Alice Ripley remains in the cast.  She's perfect for the role - but I thought she acquired some sort of affected English/Irish accent at times.  Very odd.  All the other originals have changed out - and not for the better, i regret to say.  Brian D'Arcy James (rumored to be returning this summer) was a much stronger Henry than Adam Chanler-Berat - both vocally and physically.  Kyle Dean Massey was a fairly equal replacement for Aaron Tveit but Aaron seemed to belt it out and display a bit more angst, anger, and emotion (they're both adorably cute, don't worry).

Today's family problems (suburban or otherwise) are increasingly the subject matter for stage productions (e.g. August Osage County, Next Fall).  The show remains a powerhouse - well worth the price of the ticket - and it's fresh and new - and (still) not your mother's old musical - for sure.  And I'm going to guess that a significant majority of the audience each night is probably looking directly in a mirror.
Reviewed by: doug marino

A charming and elegant evening at the Walter Kerr Theatre.  I'd never heard anything about the show before i saw it - so i was a blank slate ready to be impressed by Mr. Sondheim and this cast.   And impressed I was.    Catherine Zeta Jones was magnificent.  I won't say her rendition of Send in the Clowns was the best i'd ever heard, but it was solid and heartfelt.  A great actress she is, no matter what the medium.  Angela Lansbury is a gem and it's a pleasure to see her no matter what the medium.   Although she did just get off a run of Blythe Spirit where she owned the entire stage from end to end - this show is a bit different.  She plays the aging matriarch in a wheel chair the entire evening - so dare i say - she could do this one for quite a long time - 8 shows every week! 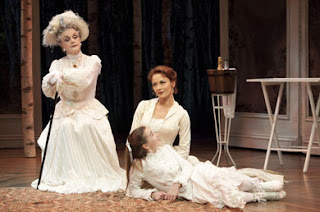 I did some reading about prior productions of this show - and if i believe what i read - this production was quite elegant - unlike the prior incarnations.  Brought to mind another Sondheim show, Company, also an elegant reincarnation a few years past.

I won't say the show itself is a draw.  It's a bit old fashioned and predictable.  The main draw is Angela and Catherine - for sure.  Aaron Lazar and Erin Davie certainly add to the evening with their charmed performances.   Sondheim's Every Day a Little Death seen live on stage was a treat.

Not sure this one will last beyond Angela's go at it.  Maybe someone can replace Catherine Zeta Jones, but nobody can replace Angela.