If anyone had told me a year ago that I'd be going to see a play half in Chinese on Broadway I might have fallen off my chair laughing.  Broadway doesn't do foreign language plays, does it?  Well hold onto your egg rolls Mr. Goldstone - Ch'inglish is now on Broadway!  And what a feast of comedy it turns out to be.

David Henry Hwang has written another East meets West opus.  This time it's funnier than a fortune cookie and packed with great American and Chinese actors turning in top-notch performances.  Half of the play is in Chinese with subtitles boldly displayed above the action for all to read - and laugh over.  The play is mainly concerned with the mis-interpretations between English and Chinese, but also indirectly and delicately pokes fun at the stereotypes in both the American and Chinese cultures.

While the story could certainly use a haircut upwards of 20 minutes, Mr. Hwang has given us what I believe is groundbreaking.  While the main character, Daniel Cavanaugh (Gary Wilmes)  is a full-blooded American and his consultant is a British speaking immigrant to China (Stephen Pucci), we are treated to some magnificently entertaining and witty character acting by full-bodied Chinese actors who speak almost entirely in Chinese the entire evening - Johnny Wu (Bing), Christine Lin (Miss Zhao), Angela Lin (Miss Qian), and Larry Lei Zhang (Minister Cai Guoliang).  Taking the lead opposite Mr. Wilmes is the marvelously complex and incredibly funny Jennifer Lim as Xi Yan. 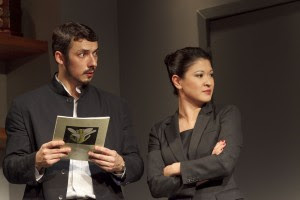 No matter what you think of the play - there is no doubt you will find the clean, modern, rapidly rotating sets by David Korins quite possibly the best on Broadway today!

On the surface we laugh at all the mis-translactions, both spoken and in writing - but lurking underneath Mr. Hwang has given us a rich study not only in linguistics, but culture, motivation, and love.
Reviewed by: doug marino

An intellectual, interesting, and engaging play, Venus in Fur, by David Ives is now playing at the Samuel J. Friedman Theatre at the Manhattan Theatre Club.   Featured just last season at the Classic Stage Company off-Broadway, MTC saw the potential and ushered this tension -filled twosome uptown without delay. 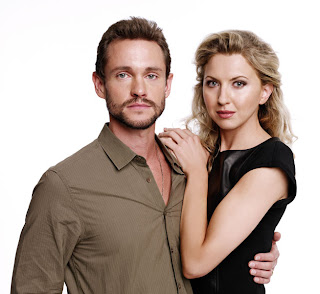 Staring that sexy Broadway vixen Nina Arianda and the uber-handsome Hugh Dancy - it's hard to imagine a better matched duo for this one.  Packed and dripping with sexual tension, desire, and mystery, Vanda and Thomas take us seamlessly back and forth between modern day rehearsal room and a 19th century aristocratic setting.  Genius in its construction, Mr. Ives endows the two characters with modern problems offset by deep secret desires and great talent.  He juxtaposes time, gender, and desire.  The actors are virtually perfect for the roles - mirroring the traits of the characters flawlessly.  You can't wait to hear what Vanda say or do next.  You quiver waiting for Thomas to submit to his obvious desires.

I did not see this play downtown at the Classic Stage Company, but after seeing it now in a modestly larger house I think I would have enjoyed it even more in an intimate space.  However, I make special note of John Lee Beatty's box-like set that significantly diminishes the cavernous stage at the Friedman to a more intimate size.   And of course, there's that signature Walter Bobbie directorial crispness to the pace and sharpness to the dialogue that both keep tension high and the momentum driving forward.

Cracking thunder and bursts of lighting accentuate what is already a wild and sexy storm of great theatre.  Don't miss this chance to succumb to your theatrical desires.
Reviewed by: doug marino

A potent new play, Milk like Sugar,  by Kirsten Greenidge is now running at the Peter Jay Sharp Theatre at Playwrights Horizons thru November 20th. 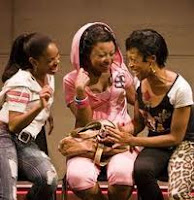 Sharp, honest dialogue, a stinging and relevant subject matter, and a top notch cast makes this transfer from the Women's Project Theater and La Jolla Playhouse a red-hot commodity for New York theatre.

Angela Lewis (Annie) takes the helm of this intense exploration of young black women in today's urban world. She along with her two best friends, Talisha (Cherise Boothe) and Margie (Nikiya Mathis) convince themselves that perhaps the "best way out" is to get pregnant.  As clearly inappropriate as this may seem, Ms. Greenidge explores the ignorance and false hopes these girls cling to in this pact to get pregnant. Not a one dimensional play by any means, Angela simultaneously has to deal with her mother (Myrna) at home - played to perfection by the extraordinarily talented Tonya Pinkins.  She, herself, clings onto the little she has - money, family, a job and her dream of writing.  Pregnant at a young age herself, she rebukes the church who failed her.  The cycle goes on. 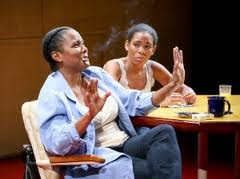 One of the more interesting characters that Ms. Greenidge has thrown into the mix is Keera (Adrienne C. Moore) - an overweight, shy, religious girl who tries to convince Annie to do things God's way.  In a striking move by Ms. Greenidge, we ultimately see a completely different Keera behind the facade -again - clinging to hopes, dreams, and a desire to make more of herself and break the cycle.

The two male characters, not surprisingly, are the least developed. Malik's (J. Mallory-McCree) character is mostly flat - mostly due to the crafting of his expected lines.  Antwoine (LeRoy McClain), a pivotal character to the plot, is also marginalized in terms of dialogue and depth.  But let's just be clear that when he rips off his shirt there were more than a few gasps (the good kind)  from the rather diverse audience.

Quite possibly the worst play of the season on Broadway.  Quite possibly the best cast of the season on Broadway.  Katori Hall's new play is imaginative and entertaining, but not Broadway material.  The cast, the top notch duo of Angela Bassett and Samuel L. Jackson, bring credibility to the marquee but fail to bring much credibility to the material.

In many ways, I walked out of the theater feeling "duped".  I thought I was going to see a deep, moving, and riveting play about one of the most influential civil rights leaders of the 1960's - maybe learn something, walk away moved, motivated, empowered and energized about the message of civil rights.   Turns out - despite all the marketing falsely hyping the play up to be such a work - that the play is a silly fantasy about what might have happened in his hotel room the night before MKL was assassinated.  What I expected was something powerful, a moving and passionate discussion of issues, ideas, and some insight to the movement.  What I got was a fairly accurate portrait of a normal, imperfect, flawed man. 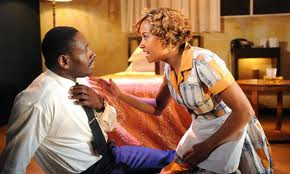 Was I impressed by the tremendous performances - yes - mostly by the lovely Ms. Bassett.  Mr. Jackson, a powerhouse in his own right, was clearly directed to tone it down.  He played things cool, calm, un-impassioned, and quite frankly, boring.

Don't be fooled like I was.  The plot is silly and the made of the stuff a tabloid might publish as entertaining, but ultimately empty calories and meaningless.  If you want to see it - go in knowing you won't come out any wiser or empowered.   Mr. Jackson and Ms. Bassett are worth seeing.  I just wish the material they presented was a powerful as they are.
Reviewed by: doug marino 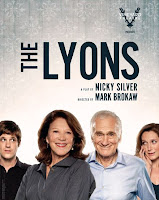 A new play by Nicky Silver, The Lyons, strikes a bitter and bitingly funny tone that all too many dysfunctional families will likely recognize.  Never known for his innocuous dialogue or weak point of view, Mr. Silver puts death right in our faces this time as the patriarch of this family, Ben Lyons (Dick Latessa), is being consumed by cancer and near death in the hospital bed as his wife, Rita Lyons (Linda Lavin) and his children, Curtis and Lisa Lyons, (Michael Esper, Kate Jennings Grant) gather by his side.  From the very first moments, you realize this last visit is going to be anything but peaceful and quiet. 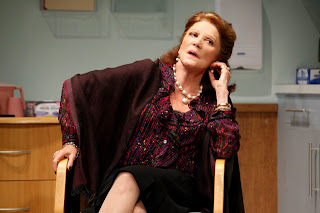 Ms. Lavin shines.  Her lines are peppered with bullets - most every one hitting a bulls-eye - each acknowledged with her trademark puckered lips, or a sharp glare.  The disappointment and anger of her entire married life boils to the forefront in these last few days.  Her children show up - each damaged in their own deep, sad, and personal ways over the years and bring no comfort to either father or mother - nor to each other. 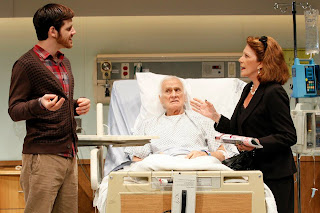 Mr. Silver's play starts out in classic comedic form in Act I, but after a brief intermission Act II takes a few detours that take the audience by surprise - and especially Scene 2 in Act II, which seems to bring little relevance to the story and while cleverly acted by Mr Esper and Mr Wooddell (Brian), ended in an unnecessarily violent and disturbing confrontation.  Scene 3, which needed some link from Scene 2, returned us to the family drama more akin to Act I.  Add an unexpected detour and then it all wraps up.

Ms. Lavin's barbs, Mr. Latessa's rants, and their damaged children's pathos are all superbly and sharply executed.  If only Mr. Silver's story was as consistently impressive.  I think it's fair to say that if Ms. Lavin's name was not associated with this production, it would be far less enjoyable.  Nonetheless, it is - and therefore well worth the price of admission to see this stage veteran consistently fire her weapon and hit her targets with aplomb.
Reviewed by: doug marino

Kaddish (or The Key in the Window)

The Adaptations Project is presenting a powerful work based on the poem of the same name, Kaddish, by Allen Ginsberg.  Created and performed by Donnie Mather, the show was originally work shopped in 2009 at the New York International Fringe Festival by The Present Company.   A Kaddish, in Hebrew, is a prayer for the dead.  Mr. Ginsburg wrote his original poem as an elegy on the death of his mother and it has been transformed to a one-man memory-play for the stage. 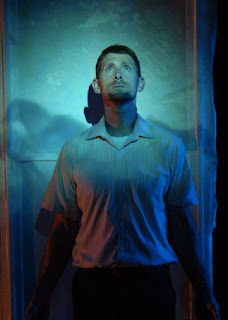 In summary, Mr. Mather is hauntingly beautiful.  His every spoken word is painful yet tender; depressing yet hopeful.  The memories flow from his lips like water from a fountain - a continuous and chaotic cascade of emotion and passion.  A one-man show is probably one of the most frightening things an actor can mount - and Donnie executes flawlessly with a keen awareness of the subject, his thoughts and fears, and his demeanor and tone.  In a mere 80 minutes, Mr. Mather paints a vivid picture of Mr. Ginsburg's life with and without his mother.  For a fleeting moment, I felt similar to how i felt watching Jefferson Mays' brilliant performance in I Am My Own Wife.  Different play entirely, but a very similar vibe.

It's not every day that you can experience this depth of performance.  The experience is further magnified by the simple set and intentionally varied lighting (Brian H Scott), ingeniously timed and well placed video projections (C. Andrew Bauer) and eerie sound scape (Darron L West, Stowe Nelson) all in such an intimate and close space.
Reviewed by: doug marino