One pure guilty start to the summer pleasure, coming right up.  Let's just get this out of the way right up front.  This show is so bad, it's delicious!  There is marginal talent on the stage - certainly not much good dancing, plenty of loud 1980's power ballads and anthem like songs we all remember, and plenty of fairly decent, but not breakthrough acting going on.  Frankly, from a pure theater standpoint, it gets a C- at best.  But from the entertainment angle, it's a B+.  A simply enjoyable evening that includes lots of bad hair, fairly decent tunes, a giggin' rock band, a couple of sexy as all hell boys - and on top of that I could have a beer at my seat! 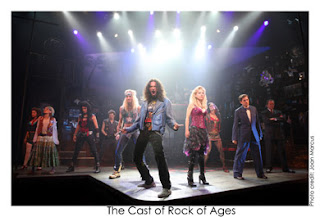 I did at times feel like I should have been at Madison Square Garden - partly because of the aforementioned beer and partly because of the strange non-traditional theatre crowd drawn in for the music.  Many yelled and pumped their pinkies and thumbs in the air and some just talked throughout the show, probably because their girlfriends did not inform them that they were going to a Broadway show rather than a rock concert.

All this aside, I was entertained.  James Carpinello  - hot and dripping with sex.  Kerry Butler (Sherry) finally got to make out with him (since he never made it to the opening night of Xanadu because of his injury!).  I didn't see Constantine Maroulis, but his understudy was darn good.  Fill in the comedy factor with Hertz and his son Franz (um, super funny and sexy and the boy could dance his cute little ass off!).

I've said it a few times this season - the show was good, but is this Broadway?  I think not.  I'd pay to see it at the Beacon Theatre or in this case even the Theatre at Madison Square Garden - I'm not happy that this crap ends up on Broadway!
Reviewed by: doug marino

What a satisfying evening in theatre.  The ensemble cast at Classic Stage Company has put on yet another gem.   Headlined by Diane Weist, the entire ensemble was a powerhouse.  The Forest is a play originally by a Russian, Alexander Ostrovsky (think Chekov), which has been adapted by Kathleen Tolan.  It concerns a powerful woman in Russia who has some money, is a little cheap but cares for and raises poor young children from the town.  'Tis the age of arranged marriages, dowries, male dominated business and politics, and many formalities of public life.   It's a romantic comedy of days gone by. 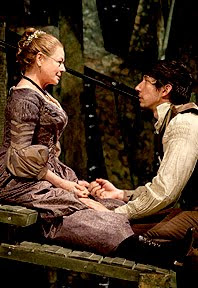 Here we have a young girl who is promised to man whom she does not love.  She loves a boy from the town madly (and secretly) who does not have the dowry to pay to marry her.  There's a poor young man at the estate who is not too smart and can't figure out how to please the mistress of the estate.  The mistress of the estate who is in love with the young boy but for the formalities of life, is afraid to tell him. There are two vagabond actors, one of whom is a long lost relative, a few townspeople and two servants on the estate.

The actors all serve up outstanding performances - from the comedic to the dramatic and you left the theatre with a sense of just having witnessed true professionals delivering the goods.  Bravo!
Reviewed by: doug marino

I have no problem with actors who have disabilities.  I actually love to see them on stage, disproving stereotypes, taking on the challenge alongside their peers.  At the end, we just decide who did well and who did not.  Who cares about the disability?  Not me.

On the other hand, I don't agree with the idea that a hearing person can't play a deaf character, a seeing person can't play a blind role, etc.  I don't think either should be preferred - or discouraged - just the best person for the cast at that time, that production, and the desired result.  This production of Bass for Picasso was produced by Theater Breaking Through Barriers.  They promote and encourage actors with disabilities to hone their craft.  Bravo! 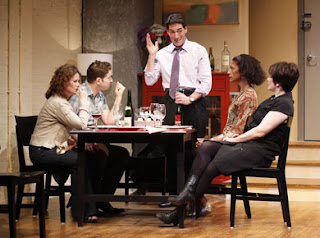 Now - with that out of the way - the play was awful.  An absurd, (and frankly a bit dishonest) comedic romp (occasionally) looking at the gay lifestyle and concepts of family in New York today.   Well - i for one don't know anyone like these characters - none of them.  They were over-the-top and stereotypical.  I presume the theater company was trying to make a point about discrimination and stereotyping - just using another group of people to prove the point through the laughter.  Well, the characters were strange - and frankly, the disabilities the actors had only served to make each of their characters more absurd and in turn the entire play a flop.  There were plenty of funny lines, but I left feeling sad for many of the characters.  Most of them, actually.   I think the choice of the work was a gamble.  One that will not pay off.
Reviewed by: doug marino

Two extraordinary women playing two rather ordinary women.  Two contemporary powerhouses, Edie Falco and Alison Pill, take on this two-hander from Naked Angels at the Peter J. Sharp Theatre at Playwrights Horizons.  Probably not a coincidence that artistic director, Jeffrey Nauffts, has a hit play, Next Fall, currently playing on Broadway.   How he has one playing off-Broadway too. 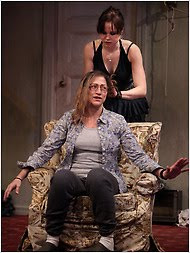 The play was commissioned in England to be delivered to women in prison - to tell them how hard it may be "on the outside" after they are released.  Money doesn't come easily, old habits die hard, and family may  take several forms.

A 90 minute electrifying performance by both women.  While virtually nothing much transpires between the two women the entire show - the message, emotion, and result is incredibly powerful.
Reviewed by: doug marino

A light romp on West 50th Street at the New World Stages with a delightful cast.   It's a bit like a skit on the Tonight Show - a wink and a nod - but delightful nonetheless.  Betty Buckley and Peter Scolari headline the ensemble.   Check it out.  The cast alone is well worth the off-Broadway ticket price.  New favorite funny boy - Jimmy Ray Bennett.
Reviewed by: doug marino

This seems to be the break-out season for contemporary gay-themed plays and musicals of all kinds  - The Temperamentals, The Pride, Yank, Next Fall.  Each of them is different - an almost forgotten historical gay movement, a mysteriously time shifting play comparing the 1950's and the 1980's, a musical about a military romance during the war, and a contemporary family shocked from all sides by an accident face each other in a hospital.   One way or another, they all involve important social issues of our today - family, relationships and love.  The Kid is no different.  Dan Savage, sex columnist, wrote a book about his experience of adopting a baby with his partner.  This is their story set to a wonderful score with an eclectic and magnificent ensemble cast. 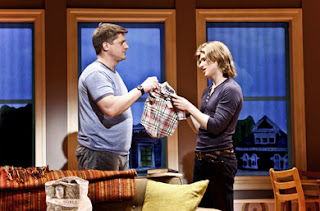 Christopher Sieber (Dan) and Lucas Steele (Terry) give a tender, romantic, and honest performance  - so honest in fact, that you might think they are an off-stage couple as well (alas, they are not).   The supporting ensemble peppers them with with sage advice, warnings, a splash of humor, and of course lots of great harmonies.   Jill Eikenberry, as Dan's mother, sings a song in Act II that brought tears to my eyes about a mother watching her son grow up and letting him be who he needed to be.   The always adorable Tyler Maynard hammed it up as only he can as Chad and a few other scene stealing characters.  Susan Blackwell usually known for her sardonic wit kept things uncharacteristically serious and real as Anne, the adoption agent.   Ann Harada, as Ruth (and others) had several comedic cameos.

Not only was the musical score divine, the set had a multi-media backdrop where video blurbs and graphic animations were shown.  The final animation clip was a perfect way to end and entirely enjoyable evening of theatre. There's a lot of competition in this market segment this year - but I have a feeling that this won't be the last time we see The Kid on a New York stage.
Reviewed by: doug marino

The Elaborate Entrance of Chad Deity

As advertised - a power-slam of a play!  Wow. Kudos to Kristoffer Diaz.  Wrestling on Broadway - who could guess that it would win a Pulitzer prize!?  Well, although it's subject matter happens to be wrestling - it's about so much more.  Americans, immigrants, money, culture, ignorance, racism, and identity.  That's a whole lot of stuff packed into two hours. 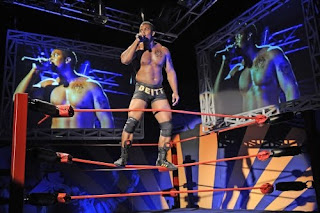 Let me be upfront.  I HATE wrestling.  (If I liked it do you think I'd be writing a Broadway theatre blog?).  But wrestling is a merely the perfect tool to lay out the argument.  And "lay out" is exactly what Ushman Ally, Terrence Archie, Desmin Borges, Christian Litke, and Michael T Weiss do with the material.  Power-Slam. 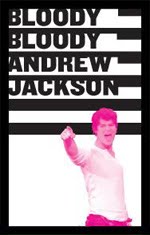 Entertained?  I sure as f*#k was.  Witness to history?  In a way, sort of.  Top notch theatre?  No, not really.  What does this all mean?   Spend the $60 for a ticket and get an irreverent, funny, musical history of the life of our 7th president - Andrew Jackson. 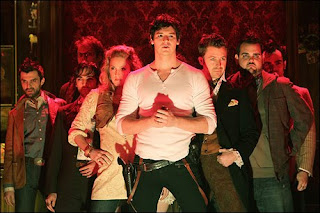 I don't see this as a Broadway transfer (but crazier things have certainly happened).  Appropriate for the Public Theatre this musical romp was well worth the 90 minutes in the elaborately shabby Newman theatre at the Public.

From his first words (and first sight - *sigh*) Benjamin Walker (Andrew Jackson) is HOT (dripping with sex, one might say) .  The ensemble cast surrounding him never failed to entertain.  More than a few times - over the top - but I guess that's what I signed up for.  My favorites included Lucas Near-Verbrugghe (Van Buren) and Jeff Hiller (Adams)  - who both almost made me pee in my pants a few times.  Everyone is young.  Everyone is sexy.  It's loud. That's what they are going for.

What a thrill to see a new show that really blows you away.  This is a joint production between Playwrights Horizons and The Vineyard Theatre.  It's been in development for about a year on various stages and this stop on 42nd Street is a true winner. 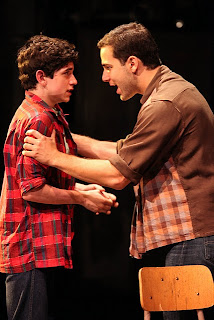 Pete (Al Calderone) runs away with his best buddy Dusty (Noah Galvin) to try and preserve the memory of his father who was killed in a mine explosion (hence the title, the Burnt Part... of the mine).  Chet his older brother (Andrew Durand) and his best buddy Jake (Charlie Brady) chase after them.  The story is a powerful ode to family and memory, growing up, chasing a dream, and a fight to "get out" vs the need to "stay".   The power behind this show is the music - one strong ballad after another and a cast that can fill the theatre from the front row to the very last.  Kudos to the entire creative team - Mariana Elder (book), Chris Miller (music), and Nathan Tysen (lyrics)  The creative direction (Joe Calarco) and use of the stage, ramps, and aisles during the performance drew you in even closer to the story.

Run, Don't Walk.  This one has Broadway transfer potential.
Reviewed by: doug marino