Water by the Spoonful

A play about addiction, redemption, hope, and family.  It's a Pulitzer prize winning work by Quiara Alegria Hudes that reminds us of the absolute fragility of sobriety. 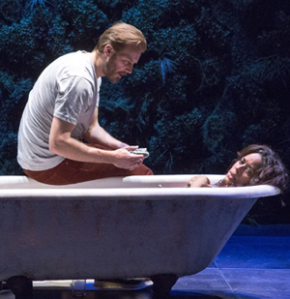 The second in a trilogy, it continues the exploration of Elliott (Armando Riesco), his family, and his personal demons.  Liza Colon-Zayas holds court as Odessa - with all her flaws and weaknesses laid bare on the stage in a triumphant performance.  The ever-present on-line chat room community of Chutes and Ladders (Frankie Faison) and Orangutn (Sue Jean Kim) captivate and, thru some sharp audio-visual assistance, are able to deliver an on-stage performance of the otherwise invisible.  Fountainhead (Bill Heck) bottles the anger and frustration and simmers with rage and self hatred with aplomb.

The title of the play, you will learn, has to do with the circumstances of one of the characters' childhood experiences.  Only then will you truly understand the significance.
Reviewed by: doug marino 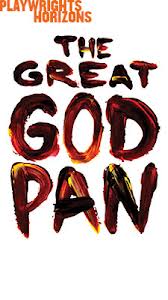 Amy Herzog, last dazzled us with 4000 Miles at Lincoln Center Theater.  Once again, in a magical and emotional journey into memory, identity, and truth, Ms. Herzog assisted by a fine cast and delicate direction does not fail to impress.

Jamie (Jeremy Strong) is a seemingly normal young Brooklynite with a girlfriend (Sarah Goldberg) and family unremarkable to the naked eye.   But - curtain up - in walks Frank (Keith Nobbs), his childhood friend, and modern day messed up type who is back after 25 years to tell Jamie he's going to file charges against his father for molesting him.  Why is Frank telling this to Jamie?  Because allegedly Jamie was one of Frank's father's victims too.  Or so says Frank. 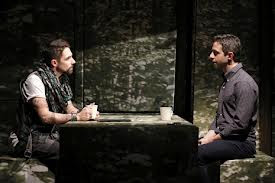 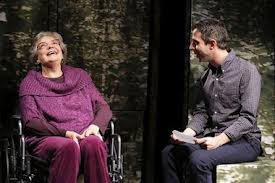 Slowly we realize that Jamie has no real memories of his childhood.  And perhaps, we being to ponder, this is the reason.   Jamie engages his mother  (Becky Ann Baker) and she's curt and uncharacteristically bothered by it (an odd reaction for a social worker, he points out).  His father (Peter Friedman) adds to the fire by telling Jamie about some early family and neighborhood shuffling.  His girlfriend, who through observation and innuendo also has many of her own set of "issues",  has her own take on the subject.   Jamie struggles with his lack of memory and visits his old nanny/babysitter (Joyce Van Patten) who, in her tender and forgetful old age adds even more questions than answers to the memories.

Is Frank who he seems?   Will Jamie ever remember what he needs to know?   Who is the Great God Pan and how will this all conclude?   Stop on over to Playwrights Horizons to find out.  It's well worth the price of admission to see these fine actors execute Ms. Herzog's emotional play under such fine direction.