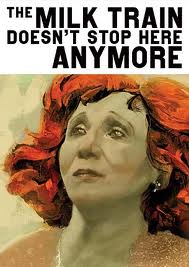 When compared with the 1968 movie staring Richard Burton and Elizabeth Taylor (Boom!) almost anything could shine.  As a matter of fact, the play was first mounted on Broadway in 1963 (re-mounted in1964) and played a combined total of 74 performances - receiving poor reviews all around.

So why then did the Roundabout choose this little known flop to re-mount?  One word - Tennessee Williams.   His works are grand and his talent well proven.  Perhaps the secret to this run's success will be two-fold - a complete dumbing down of the unnecessarily over-the-top costumes, Hollywood-like sets, and unnecessary camp and phony glamour but, more importantly, Olympia Dukakis herself. 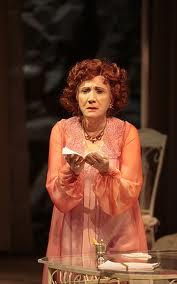 The play centers around Flora Goforth (Olympia Dukakis), a wealthy, older, eccentric dying American woman who had fled to an isolated cliff side villa retreat on the Italian coast to write her memoirs and live out her final days.  She receives a very handsome young visitor who is a struggling poet known as "the angel of death" (Darren Pettie) and we are taken on a journey into the minds and hearts of two very different individuals who both deeply want and need something from this relationship.  Round out the cast with an eccentric (read gay) friend, locally known as The Witch of Capri (Edward Hibbert) and Blackie (Maggie Lacey), Mrs Goforth's tortured personal assistant and you end up with a cauldron of wit, sarcasm, humor and love that Mr. Williams serves up deliciously.

Without the baggage of being a big dramatic (or drama-filled) Hollywood star, Dukakis plays the role in her own unique and humble style - leaving out most of the camp and everything that comes along with such a background.  She uniquely slices straight to the heart of Mrs Goforth - exposing her vulnerabilities, wants and needs, all the while maintaining her vitality and and sharp tongue.  Overall, the play, in Tennessee Williams signature style, is a bit too long, but when you're enjoying the banter and emotions on the stage, sometimes that doesn't matter.
Reviewed by: doug marino

Tucked away in the tiny Theater C atop the 59E59 complex lies a silent weapon consisting of hilarity and laughter.   Room 17B is loosely based in an office building, but don't worry, that' not really the important part.  Four gentlemen who never utter more than a grunt, a groan or a scream bring a genre of years past back to life with side-splitting results.  Joel Jeske, Danny Gardner, Brent McBeth and Mike Dobson take 65 minutes that you may have otherwise thrown down the toilet and turn it into sheer physical entertainment. 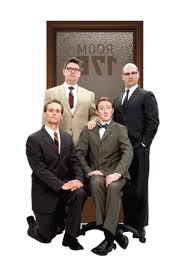 Part vaudeville, part silent film, part mime, part slapstick, and part physical comedy, these four characters present over 20 skits in and around this mysterious office filled from floor to ceiling with file drawers - many of which hide a prop or device needed to help the silent actors convey the story. Beware, though - - audience participation is mandatory and the theatre is small - so you're likely to be scrutinized very closely for a minor part in the evening's script.

For such a small production I marveled at the professionalism and skills of the actors.  It seemed like they had been working together for years!   Lighting and sound were brilliant and while I'm not a fan of the audience participation schtick - it was all crafted to make each chosen audience member feel like they were made an honorary member of the show.  Kudos to the boys of 17B.
Reviewed by: doug marino

I'm glad the word "gruesome" was in the title of this show.  As I sat in the "playground" seating area (seats on the rear stage facing outward toward the audience leaving only two "walls" to the actors on stage) I soon learned just how gruesome those injuries were going to be.  It's a clever staging technique that I encourage everyone to ask for and enjoy. 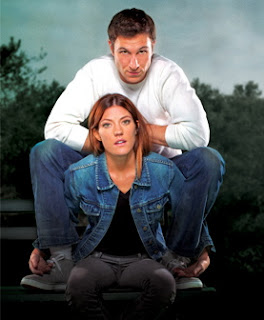 A two-person, injury-ridden play that wraps up in 80 minutes is just about all the audience really could be subjected to on this topic by playwright Rajiv Joseph (soon also to be on Broadway with his work Bengal Tiger at the Baghdad Zoo staring Robin Williams).  Although it's graphic, it's not a two-hour horror flick either.  We follow the twisted (one might argue mentally unstable) children, Kayleen (Jennifer Carpenter) and Doug (Pablo Schreiber) from childhood to adulthood.  We start at 8 awkward years old and in various non-linear order end up at about 38 years old - drawn inexplicably to each other by injuries usually physical in nature.  Doug is the more outwardly weird one - getting into fights, showing his aggression, and harboring feelings for his best friend, Kayleen.  Superbly played by Mr. Schreiber, I always felt he was slightly mentally challenged and thus that drove his behavior.  Kayleen, on the other hand, while seemingly odd, is the more outwardly normal one - but not without her own problems - more internally driven - depression and rejection.  She's not loved by her father at all and ends up deeply depressed, cuts herself, takes drugs, and at her lowest point - tries to cut her stomach out.  Yes, gruesome is the operative word in the title.

Certainly not a happy play, but Mr. Joseph does have an ear for dialogue and undertones and the staging at 2ST is brilliantly executed.  There are no heroes in this play, no rescues, and not a whole lot of fun - but with two skilled actors, this play takes slices of life and reminds us about the fragility and delicate balance of life itself.
Reviewed by: doug marino 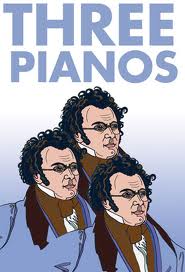 Part concert, part history lesson, part poetry, part performance art. Three Pianos is a casual, contemporary, quirky, and off-beat evening in the theatre - and I'm pretty sure you'll walk out knowing just a little bit more about Franz Shubert than you did before you walked in.

Three friends and artists slip in and out between the life and times of Franz Shubert and the present. We are essentially learning about Mr. Shubert and his contemporaries, the history of music, all wrapped in a chaotic and alcoholic haze start to finish translation and analysis of the 24 pieces within the complete work, Winterreise. We learn what the lyrics mean, why he may have written them, and are given glimpses in to the life and times of the artist as well as the contemporary characters. Written, arranged, and performed by Rick Burkhardt, Alec Duffy, and Dave Malloy, this show is sure to delight. As they are having fun on stage, it's sure to rub off on you.

The three friends who are gathered on stage are not quite acting - I would categorize it more as performing. I wouldn't say they were actors, nor were they singers and at least one of them played a bit less on the piano than the other two. It's more casual, fun and fantasy on stage. It certainly helps that the audience gets to imbibe while listening in. Yes - they serve wine. Not just a glass, but bottles flow up and down the aisles! While that may seem antithetical to watching theatre, it certainly pairs up nicely with the atmosphere created here.

Recently extended - but only until January 16th - -so don your scarf and cap and head over to East 4th street to join the wintertime fun!
Reviewed by: doug marino 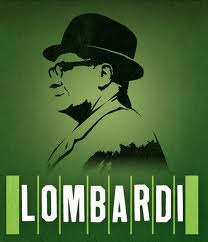 Who knew a story about a football legend would be so well acted, well executed, and well received by the audience?   I resisted for a long time.  I don't like football - heck I knew neither anything about Vince Lombardi before I entered the theater nor what team he even coached.  Well, let me tell you right here, right now - this show is engaging, informative and entertaining well beyond each of its 89 minutes. 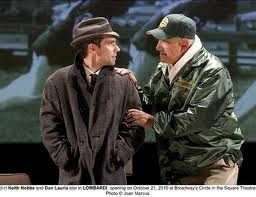 I couldn't believe how well Dan Lauria takes on the persona of Vince Lombardi - the voice, the walk, the stature, the attitude, and smallest of actions and mannerisms.  Judith Light masters the strong, smart, stalwart woman behind the man, Marie Lombardi and Keith Nobbs takes on the young, hungry, naive sports reporter from New York City, Michael McCormick, sent to Green Bay to interview Lombardi for a piece in Look Magazine.  So well executed was this production, I see Tony nods at least for Mr. Lauria as best leading actor - if not also for Light and Nobbs for best supporting actors and possibly for best play for the work by Eric Simonson which was based on the book When Pride Still Mattered:  A Life of Vince Lombardi by David Maraniss. 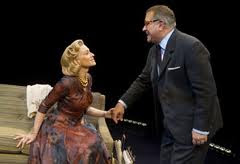 The pace was brisk, the humor sharp and the drama poignant.  Even for a New Year's Day performance, the audience was engaged and the actors were firing on all cylinders.  In a mere 89 mere minutes we were transported to 1960's Green Bay, Wisconsin to observe Mr. Lombardi, his family and players and learn what made this great American football coach tick.  Touchdown Broadway!
Reviewed by: doug marino