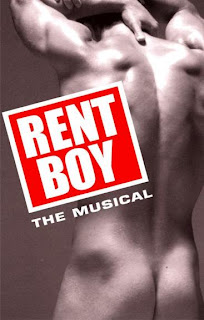 A delicious romp way downtown on the east side at the Richmond Shepard Theatre (huh?  where?) - yes the former Vineyard theatre space, i presume - on East 26th almost in the river!

Let's all be clear - Broadway-bound this show is not.  A delightful, naughty, and entertaining tuner, indeed it is.  Composer Andrew Sargent (a whole lotta delicious item all by himself off-stage) and the amazingly vivacious David Leddick (book, lyrics, and MC/star of the show) take full charge of the melodies along with a charming, if slightly campy (how could it not be?!) plot. 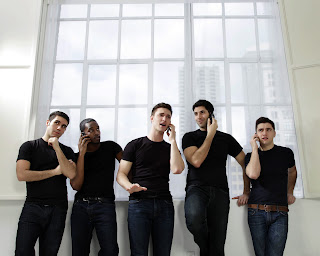 Playing for just this week - grab a ticket.  grab a cab. and grab some ass down on the east side.  This one won't last here long.  But I'm sure we'll see it in pTown or some other fun gay summer spot!
Reviewed by: doug marino 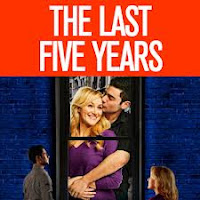 A powerhouse.  Packs a punch.  Profound.  These are some of the words used to describe Jason Robert Brown's musical tour de force, The Last Five Years.

Jamie and Cathy both sing the tale of their relationship - but there's a twist.  Jamie tells it from beginning to end.  Cathy tells it from the end to the beginning.   But wait, there's another twist.  While the two performers both grace the stage together, they are essentially alone -never looking at nor speaking to each other.    Isolated.  Lonely.  In love.  Out of Love. 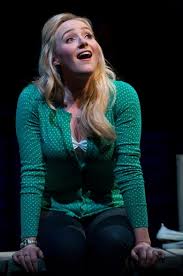 It is only once at the confluence of their story in the exact middle of the story when they get married in Central Park, that they unite and proclaim their love to each other in song as they exchange vows.  And as quickly as it happens, they continue on their journeys and the story proceeds (and/or regress as it were).

Two actors.  One story.  Plenty of potent song.  A mere 90 minutes on-stage.  A lifetime in your heart.
Reviewed by: doug marino 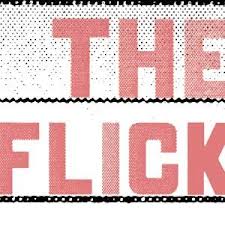 What a dichotomy of emotions this play elicited.  Superb acting and what I suspect is superb direction in what just might be the most self-indulgent, childish, selfish play I've ever paid money to see.

So poorly written and conceived is The Flick that it was a unanimous decision of my two other stalwart heater-going friends (and many others) to leave after the painfully show and entirely uneventful 1h:40m first act (with another 1h yet to go in act two). 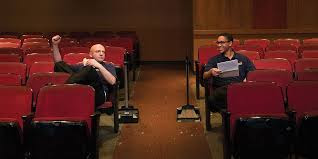 Matthew Maher (Sam), Aaron Clifton Moten (Avery), and Louisa Krasuse (Rose) played their characters with aplomb.  In fact, some of their acting was some of the best I've seen.  The problem here is not the acting - it's the utterly meaningless, immature, and senseless writing.  More specifically the pace and the repeated tone of hesitation and the pauses so pregnant an emergency c-section would normally be called for.   The playwright, Annie Baker, should not have been allowed within 1000 feet of a stage with even a draft of this one. 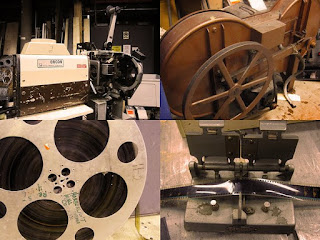 As bad as the writing was, the concept of turning the stage into a movie theatre complete with a working film projector was brilliant.  Such a shame the high-brow concept was abused in parallel to the low-brow dialogue.  The opening scene, as I look back, set the tone for the entire play - a movie playing back to the audience in the projector with an orchestral score.  It went on... and on.... and on.... (queue much nervous laughter and the beginning of a never-ending sense of "get on with it already").

I get her point (which could have been made in about 27 minutes) and I honestly have absolutely no care or desire to know what became of her characters (even the one we hadn't yet met) in act 2.  It was that bad.
Reviewed by: doug marino

Not a lot of 'happy' going on in this play.  Amy Herzog, a fresh, young playwright takes us on a tour of two slightly 'off' individuals currently living in Paris.  Why are they there?  What exactly is wrong with Abby?  Do we really know who Zach is? 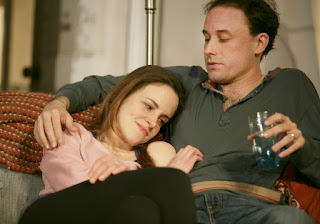 These and many more questions are asked, explored, and answered as the evenly paced 1:40 minute play progresses from pot smoking friends to scrubbing the blood off the floor.  Maria Dizzia (Abby) and Greg Keller (Zach) weave their tale of mystery and madness with aplomb.  Actors playing crazy fits them well.

Aptly directed by Anne Kaufmann, Belleville offers intrigue, mystery, madness and a fair share of sadness.  As I left the theatre, I couldn't stop thinking about who loved who more and who loved who more?  I have my answer.  What's yours?
Reviewed by: doug marino