The sub-headline for this post should be "Between Follies".  That's because Jan Maxwell helms this heady, intelligent, no-small-undertaking of a play - in-between her Follies DC run and its transfer to Broadway.  Talk about a busy schedule! 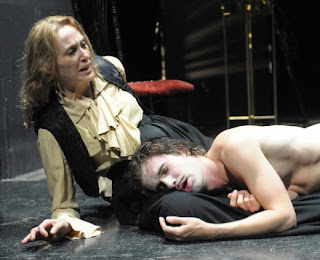 Howard Barker's play is certainly not a run-of-the-mill work.  It takes place in the 1660's in England in the restoration period - which translates to a period when government was in chaos, political ideology was in flux between the economic forces, religious forces, and the old and new aristocracy.  I don't for a minute claim to be knowledgeable on this topic nor do I believe I understood everything going on.  What I do know is that Director, Richard Romagnoli has even further energized this powerful work by adding a rough edge to the production.  Pounding punk music and choreographed moves during each scene change add a dramatic contrast to the subject matter and time frame of the play.  Costumes and makeup add bite and drama to the already heightened tension of the story. 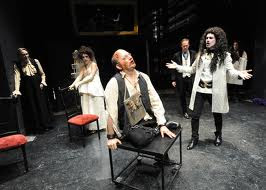 Despite the heady subject matter, the delivery by some of the actors was magnificent.  Of special mention is the stand-out performance by David Barlow who played Charles Stuart, A Monarch.  The monarch's extremely unstable mental state shown thru in Mr. Barlow's dynamic and potent portrayal.  Jan Maxwell seemed to immerse herself in the complex role of Bradshaw, The Widow of a Revolutionary and Steven Dykes equally impressed in his portrayal of Scrope, A Secretary (and several other minor characters also).

While this play might not be for everyone, I find more and more that off-Broadway houses produce such high quality work that while you might not think it your cup of tea, you're drawn in to a story, it's power, and the intimacy of the theatre that you find yourself enraptured, educated, and enthralled.  Next thing you know it's 10:45pm and you're dumped back out on the street wanting more.
Reviewed by: doug marino

I wanted it to be great.  I really did.  I wanted to walk away from the theater soaking wet - like someone opened a musical theatre fire hydrant all over me in the audience on a hot summer day. Instead, all I got were a few blasts from the sprinkler in each act - all of which wet my leaves, but never got to my roots.

Problem #1 - Joel Grey is mis-cast.  He seemed oddly out of place the entire show.   Problem #2  - The book.  It's utterly stupid.  Stupid books abound, but you gotta compensate somehow.  Problem #3 - Three rousing tap numbers that don't really go anywhere and stand-alone gems do not compensate for the aforementioned problem #2 or #1. I had such high expectations - and they promptly withered and died by 11pm (yes, it's a long show on top of everything else). 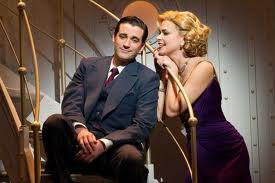 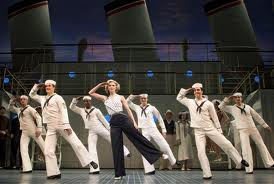 Was Sutton Foster magnificent - absolutely, without a doubt.  She's indeed delicious, delightful and de-lovely!  Her leading man, Colin Donnell, is adorably dashing and debonair and incredibly talented in the song and dance department too. You'll have to wait the entire first act for Anything Goes, the first knock-your-socks-off, full company, full-tilt tap number that brings the house down.  The entire cast is indeed talented and very easy on the eyes, i must admit.  Right after the intermission, you'll get that barn-burner,  Blow, Gabriel, Blow, and then really nothing until the finale.   I especially enjoyed Kathleen Marshall's razzle-dazzle choreography but it felt so isolated and stand-alone-ish.  And I adore John McMartin, but he looked so incredibly lost on the stage all the time.  And sometimes he just disappeared!  There's not much else to report over the rest of the 2H:45M run time aside from a very clever and cute use of a blue spot during Be Like The Blue Bird.  ~Sigh~

Best Leading Actress - No qualms.  Best Musical Revival?  Not a chance.   This ship is more like a row boat in a lake.   I'm going to wait for the concert version with the New York Philharmonic.  Get rid of the story - and focus on all the great song and dance.  Now that would be a ship I'd buy a ticket to sail on!
Reviewed by: doug marino

Spaceship crashes on Earth.  Voca People emerge.  They need Ener-gia to power up to get back home.  Moo-see-ca is Ener-gia.  Get it?

Lior Kalfo and Shai Fishman, creators of Voca People,  figured it out.  Crisp, vibrant, simple, and bright colored lights against a black backdrop; Pure white costumes (think blue man group minus the blue) and a musical schtick that's cute and cuddly to accompany some of the best sounds that a human voice can muster doing a cappella renditions of some of our all time favorites over the ages can bring the house down every single night. 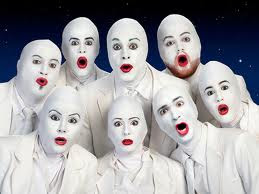 Voca People have seemingly been everywhere in the world.  Why they landed at the Westside Theatre is somewhat of a mystery.  But a mystery that will hopefully be spread by word of mouth and before you know it these 10 aliens will be playing Radio City!

The music is all generated by the human voice.  No instruments.  Lots of reverb and adorable alien jibber jabber.   Their act is filled with love and fun but comes with a warning - audience participation - touching, extracting musical genres from audience members' their brains, performing in the aisles,.  The result - toe-tapping, head-bobbing entertainment to the sheer delight of everyone in the audience for just shy of two hours with no intermission.

If Moo-see-ca is indeed Ener-gia - this adorable bunch has got a long term lock on the supply.  Get your fill today.
Reviewed by: doug marino