Modern Terrorism, or They Who Want To Kill us and How We Learn To Love Them

I'm not one of those people who attends sporting or political events and chants "U-S-A. U-S-A".  But neither am I some bleeding-heart liberal who thinks a terrorist is an unavoidable product of the lack of education and their religion culture for which we should forgive them.

There is a very slim chance I may have actually had some empathy for the characters in this play if it were actually written by a Muslim or African or even a member of the Taliban.  No such luck.  It was written by an arrogant, opinionated white guy and offers little contribution to anyone's conversation.   (Insert Buzzer sound here). 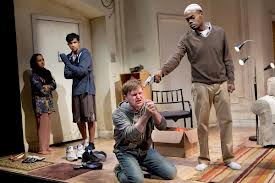 Steven Boyer, (last seen in School For Lies and Gentlemen Prefer Blondes) entertained us as the dopey upstairs neighbor but the material and storyline take his performance into the toilet.  William Jackson Harper (last seen in A Cool Dip in the Barren Sarahan Crick) resurrects his "preachy" side again and turns in another fine performance despite the material.

When a show's opening scene is a black African Muslim man with his hands in an Indian-looking young boy's underwear fiddling around with some wires sticking out...

Alexander Dinelaris' new play has taken a few years to make it to New York and it's pretty clear why you won't be seeing this one any time soon again.  It's wordy, over-indulgent, a bit too much of a history lesson, and too long. 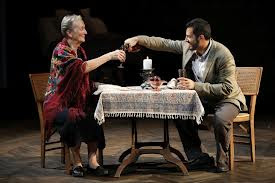 Kathleen Chalfant (Rose Afratian) is a grande damme of the stage, but even her effortless and virtually flawless performance could not overcome the deficit of material and the painful and stiff performance of Alfredo Narciso (Michael Kiriakos) - which was either his own doing or that of director Ken Rus Schmoll.

This is one of those plays that you don't get to figure everything out until the key is handed to you at the very end.  And when this key was handed to me i wanted to toss it in the Hudson River.   If you think about it for more than 5 minutes, the entire construct of Rose makes no sense whatsoever.  She lived a life to 90+ years old and never once thought to do what she did before now?

Please.  I don't believe it for a minute.
Reviewed by: doug marino

I'm frankly a bit confused by Lisa D'Amour's new play being presented over at Playwrights Horizons.  It's seemingly missing a soul or at least one that director, Anne Kauffman failed to unearth.  Fairly well-acted (read, could have been better), moderately funny, but mostly a snooze - the material never grabbed me.  Frankly, I think 90% of the theatre left the show with the same un-answered questions as me and were generally bewildered by the rambling, directionless, and oddly concluded plot. 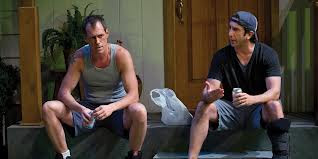 Let's just hope Second Stage doesn't pick this one up next season.  It certainly doesn't deserve another look.
Reviewed by: doug marino