Who else but Valerie Harper could burst on the stage, seemingly drunk and get a raucous round of applause?  Although I did feel like I was at a taping of a new movie of the Carol Burnett show (i really did expect Tim Conway or Harvey Korman to bust on stage any minute), I felt like I learned a little bit about the much talked about Talulah Bankhead. 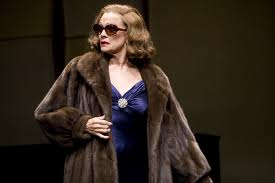 The plot of the show seemed unnecessarily detoured a few times with side stories.  Perhaps we would have been better served without the gay sub-plot and a trimming of the show down 90 minutes with no intermission.   Or maybe they tried that and it just seemed too thin?   In any case, I suspect this one will be a gem for the Broadway crowd, but not much of a draw (unless they are giving the tickets away) for the tourist crowds.  And we all know the big white buses are the only things that can keep a show alive.

I love the Lyceum theatre and i had an fun evening watching Harper hurl her humor tipped barbs all over the stage.
Reviewed by: doug marino

An endearing evening of Noel Coward was had by all.  It's light, it's gay (in both the old and new sense of the word), and it's funny.   Victor Garber proves once again to me that he can command the stage.  With a pinch of Harriet Harris and a dash of Brooks Ashmanskas, it only got better.

The play is often described as semi-autobiographical for Coward.  For sure, it's from another era - but with a cast like this and the fairly well written material - it doesn't seem stale - just the comedy of a by-gone era.
Reviewed by: doug marino

Bruce Norris' book is a gem.  The concept of a "then and now" production is not new, but he has brilliantly crafted a story that demonstrates just how far we've come - and at the same time - how little has changed.  Except for Annie Parisse, I'd not heard of anyone in the cast, but i must say a skilled ensemble all around. 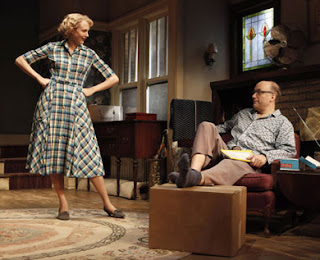 One of the most brilliant aspects of this production (i am not sure if this is how it was intended or just a stroke of genius of the director) is how the entire cast in act one is recycled in act two as other characters.  It makes sense since they are really totally separate stories bound together by a common thread - the house.

Act I tells the story of Bev (Kristina Kirk) and Russ (Frank Wood) in 1959 and the house they had to sell (no spoilers here) and to whom they elected to sell it. 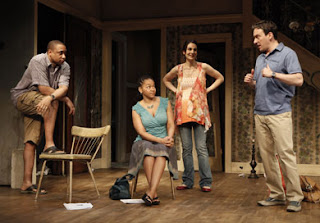 Act II tells the tale of the same house in 2009 - in much worse shape - and the couple that tries to buy it.   In each time period we are given a glimpse into the internal workings of family, society, and prejudice.

We've certainly changed on many fronts, but then again, perhaps the shoe has just changed feet.
Reviewed by: doug marino