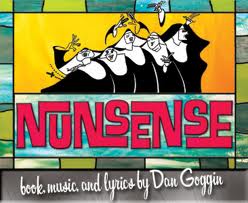 The Cherry Lane Theatre brought back an original after 25 years - Dan Goggin's Nunsense.  I believe I heard somewhere that he did not want to update it.  That was a mistake.  The show is campy enough and now on top of that, it's stale - which leads to uninteresting and boring.

The nuns themselves were OK. Sister Mary Amnesia (Jeanne M. Tinker) stole the show. Everyone else was good and seemed talented enough, but given the material - just fell flat. Old jokes, campy songs with outdated lyrics. Maybe 25 years ago people were jumping out of their seats in shock (at least the Catholics should have been!). Today it was more - ehhhh.

I had to go see it so I could say "I saw it", but I wasn't impressed. This one won't be coming to Broadway any time soon. Sister Act has them beat by a mile, I'm sure. It's over in London now. Here's hoping for a transfer of that one.