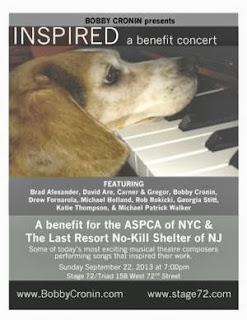 This is the first of many more evenings to come.  Musical composer and performer extraordinaire - Bobby Cronin who is cute as a button - is hosting a bi-monthly (that's every two months folks) benefit concert with a handful of his fabulously diverse peers dubbed "Inspired".

Musical theatre composers and lyricists and the like get together for the evening and perform tunes that inspired them - and share one of their own creations too.

If all of that weren't good enough - it's a benefit concert - likely revolving around animals and animal rescue. 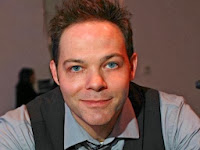 You may or may not have heard the names but you're sure to recognize their fine works.  It's not too often you get to hear the composers show you how they intended it to be heard and  the evening is sure to delight and amaze.

Check out Inspired at the Triad on W 72nd Street!  This inaugural evening featured such great talent as: 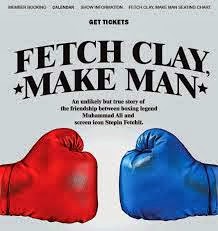 I sense a conspiracy here.  In a season that promises Rocky, The Musical, we seem to be getting a sister-preview in Fetch Clay, Make Man - the (abridged) story of Muhammad Ali.  God help us all. 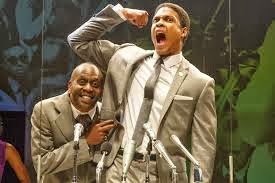 Will Power's new play, previously performed at McCarter Theater Center in Princeton is certainly well acted.  Of course it is - with such leading actors such as Ray Fisher (Muhammad Ali), K. Todd Freeman (Stepin Fetchit), and Nikki M. James (Sonji).  There was also no need for microphones partially, i assume, due to the material and characters involved, and partially due to Des McAnuff's direction to scream just about every line of the play.

While, admittedly, I wasn't much interested in the material, I found the play provocative - it made me think and reflect on that time period - and to its credit, it was very well lit, uniquely staged, and extremely well acted (shouting aside).  Float like a butterfly down to New York Theatre Workshop on East 4th and get stung like a bee by this play today!

Let me Entertain You, Again 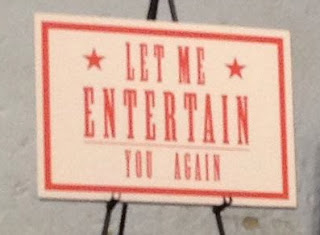 A delightful evening in the company of my theatre-loving friend, Adam.  What was equally lovely was the thoughtful and tender memoir performed by Lane Bradbury - whom I knew nothing about, but was thoroughly entertained by. 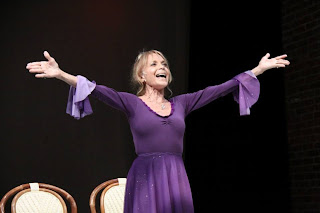 Lane was the original Dainty June in Gypsy, opposite the indomitable Ethel Merman (hence the show's title).  Lane performed on Broadway for a spell, migrated to the West in Hollywood, but has now returned to her roots on stage for this one (well, two) woman show documenting her theatrical life.

Plenty of stories, plenty of dance, song, and smiles accompany this evening and she's such an inspiration - having broken her leg and hip just a few month's ago and yet still performing this show.  Special kudos to her daughter, Elkin (who was not revealed to be her daughter till the end) for the shadow/younger Lane's song and dance routine.

Look for this show to gel some more during its development and roll into a theatre near you soon!