The new musical on the block, 13, made it's debut this past week.  As you might guess, it's a musical about being 13 years old - and there are 13 kids on stage to share the musical tale.   In this day and age where High School Musical XIV (is that what we're up to?) dominates the kid-scape - this musical just doesn't make the cut.   I'm left wondering why Disney has not brought it's international sensation to Broadway yet (who thinks Shrek the Musical will make it anyway?).

Let's get a few things straight.  This is not really a Broadway show.  It's just entertainment.  It's the clever, relevant, and thoroughly modern story of Evan, a, you guessed it, 13 year old who's from the Upper West Side. His parents are getting a divorce (surprise!) just before his Bar-Mitzvah (he's Jewish) and his mom uproots him and takes him to Appleton, Indiana (they don't have Jews there) to live.   You can just begin to imagine the trials and tribulations that follow.

What you have to juxtapose here is what i can only imagine to be most exciting times in the lives of these actual actor kids (trust me, i am SO jealous of them) against the fact you're paying $100 for a ticket to see... well... kids.  (Did i mention that they were all absolutely adorable and talented?) Why are we willing to pay this much to see kids sing slightly off key sometimes, miss a few dance steps here and there, not exactly command the stage, and put on what amounts to a really REALLY good High School Musical?  It's like the best of the best - but when the best are kids - it's not exactly Broadway quality.  Endearing and entertaining - but not Broadway.  (I have to say I also wonder if anyone else thought they were watching Cory Feldman and Haley Joel Osment on stage in disguise!)
I think the producers are going to lose their shirt on this one.  A run off-Broadway at the Minetta Lane or New World Stages seems more appropriate.   I hope I'm wrong for the kid's sake.  I hope I'm right for Broadway's sake.   You decide.
Reviewed by: doug marino

This Nicky Silver play is darkly funny, at times eerie, and overall a strange brew of ideas over at Playwrights Horizons.   It seems that family is the main focus of the playwright and a twisted tale sure does unwind.

Dylan McDermott (Nate) and Maura Tierney (Laurel) are the main characters who at the beginning, live what appears to be a normal, upper middle class married life on the Upper West Side.  Along co

mes Scott Cohen (Hal), the long lost brother, and his boy-toy hustler, Brian J. Smith (Gordon) and the entire family unit as we see it begins to unravel before our eyes (um, i have to comment once again at how gorgeous Brian J Smith really is - clothes on or off it doesn't matter!)  We immediately find out that Nate is having an affair with Steffi (Aya Cash) and it all goes to hell in a hand-basket from there.

Odd theatrical tricks are employed (very strangely) mostly by Steffi.  We see the cast break the 4th wall upon occasion to narrate the end of a scene or tell the rest of the story to the audience. Was it touching or weird?  Can't be sure.

In the end, the entire intent of the show was a commentary on how far people go when it comes to family.  In this case, absurdly far.  I won't ruin it for you.  If you do go - you'll probably walk out with a feeling that you #1, have to think some more, and #2 are slightly annoyed that you sat thru the entire play and got the ending you did.

Betty Buckley and her Jazz Quartet

The legendary Betty Buckley, or Miss Betty Lynn, as she is affectionately known by her of fans, gathered up her Jazz Quartet - Clifford Carter (Keyboards), Billy Drews (Sax), Tony Marino (Bass), and Anthony Pinciotti (Drums) and spent 5 nights at Birdland on West 44th dazzling and mesmerizing all those who flocked to see her.
An important warning to all those show tune crazy fans out there - she warns right at the outset - NO SHOW TUNES!  (fear not, she'll be packing them in at Feinstein's at the Regency in February with an all-show-tunes review!).
The songs were varied - melodic, jazzy, sultry, strong, and a little rock and roll thrown in.  She's got a range like no other.   Don't worry - she'll be back.  And if you can't wait to see her, check out her new CD - Quintessence

Arthur Miller's first Broadway play, All My Sons, was a stinging success in 1947 when it made it's debut.  It's the story of an American business man who sold defective parts to the US military with the tragic consequences of the deaths of 21 airmen.  Miller's play was, and is still today, a gripping tale of business and family, commerce and community, and the powerful intersection of them all.
The stellar cast includes:  John Lithgow (Third Rock from the Sun, Dirty Rotten Scoundrels, The Retreat from Moscow), Diane Wiest (In Treatment, Law and Order, Edward Scissorhands), Patrick Wilson (Barefoot in the Park, Angels in America, Phantom of the Opera) and Katie Holmes (Broadway Debut).

The play is an emotional atom-bomb.  Accusations, anger, and angst all buried below the surface in this family and community erupt when the son asks his brother's girl (3 years an MIA soldier and presumed dead) to marry him.  The father's past history of being exonerated in court for selling defective parts to the government come back to haunt him and the entire family.  The neighbors love their jobs in the factory, but silently remain doubtful that the family is innocent.  In a few short hours - ka-boom!  It all crumbles.
This is a limited run on Broadway - so get your hard hat on and catch this one at the Schoenfeld Theatre on Wet 45th Street.   It will all come crumbling down in 16 short weeks!
Reviewed by: doug marino

Peter Shaffer's homo-erotic play about a young boy raised in a house filled with religious fundamentalism and working class anger who blinds 6 horses made it's debut on Broadway this past week.  Daniel Radcliffe (Harry Potter) and Richard Griffiths (History Boys) headline.  Kate Mulgrew (Tea at Five, Our Leading Lady, Star Trek), CarolynMcCormik (Private Lives) and T.Ryder Smith (Dead Man's Cell Phone) are among the stand outs in the supporting cast. 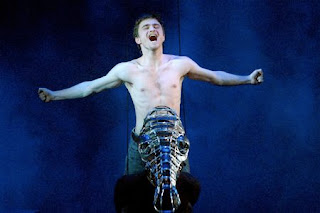 Martin Dysart (Griffiths), an aging psychiatrist attempts to get to the core issues behind why Alan Strang (Radcliffe) has blinded 6 horses in a stable in a small town.  At first blush, a horrific act, however the story unwinds itself to reveal a young man caught up in religion, loneliness, sexual attraction, and a very sad, yet plausible explanation to the tragedy.

In the course of the story, we learn that the aging Dysart may indeed be battling his own version of these devils.  Are any of us exempt?  Are we all secretly jealous of those who take the reigns of life? Even if those reigns lead us down a path to hell?  Perhaps Marx had it right. Religion may just be the opiate of the people. 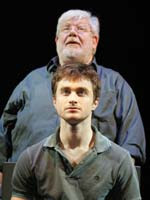 Griffiths and and Radcliffe are aided by remarkable sound, well designed and executed lighting and smoke on the stage - not to mention the very physically fit boys who play the horses.  The horse heads are a clever trick but it was the actors behind those heads executing the subtle horse movements brought their grandeur to life.

On The Rocks with Danny Leary

The triumphant return of one of the City's funniest.  The ever-delicious, always fabulous Danny Leary returns to the Duplex for another fall season of comedy, variety, cabaret, and curtain calls - and a few special guests along the way too.   Danny's recipe works - change it up every week.  Music, laughter, stories, questions to the band (ok, it's only a piano), and lots of zany, crazy fun.  By the way, that's Jessica Stewart on the piano - and she's fantastic.  Check out two of this week's hysterical guests, Leah Dubie and Shawn Hollenbach on a recent YouTube video:

Come down to the Duplex on a Thursday nite - 9:30 (pm, of course) and catch your weekly dose of fun, fun, fun!
Reviewed by: doug marino