A Behanding in Spokane

This was possibly one of the worst plays I have ever seen.  While there may have been a lot of talent assembled on stage, the material was offensive - homophobic and racist.  Yes, it was a black comedy, but I highly doubt the fat white tourists all sitting in the audience realized it as they were laughing at the jokes.
Reviewed by: doug marino

Yet another revival of this Jerry Herman classic.  It seems only yesterday I saw this one (twice even) at the Marriott Marquis.  (For the record it was 2004).   For a show that had its original run in 1983, this one has done quite well in both New York and London. 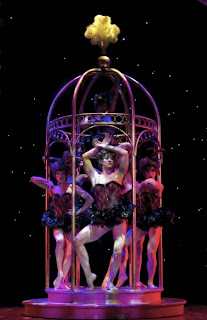 This time around, however, is different - less glitz, glamor, sequins and stardust - and more family, love, and character.  This time around we have Kelsey Grammer and Douglas Hodge as Georges and Albin.  Les Cagelles, as they always are, put on a hot, dazzling  performance - emphasis on HOT .  Anyone sitting up close can see the bulging muscles these "ladies" clearly spend time working on (oh my!).   An interesting choice this time around is for Jared De Jesus to play the role of the Jacob, the houseboy.  He's certainly adorable, but I thought maybe he was a bit over the top - too much - trying to hard - more like a Saturday night live skit than a Broadway show.  This, of course, is not his fault, and probably falls squarely on the director, Terry Johnson.

Overall, I think most people agree, the story is timeless - love and family take many forms and shapes - a message that still has a long journey ahead.
Reviewed by: doug marino

A charming and poignant evening in the theatre.  Seeing Lavin on a Broadway stage is a pleasure.  The role of Ruth Steiner was one she was born to play.  She brought an ethnic and comedic touch that few others could bring.   Sarah Paulson turned in a transformative performance - going from a shy, insecure undergrad to a successful award winning published author. 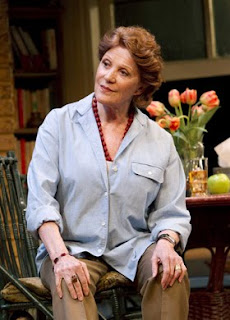 The dilemma presented in this story is one argued through the ages - Who owns a story?  Who has the right to tell it?   Ruth and Lisa wove a complex relationship - one of teacher and pupil and another as surrogate mother and daughter.  Playwright Donald Margulies prods the audience to take sides, makes you ask yourself where to draw the line.  He presents both sides of the story but it's highly likely you'll walk out of the theatre with an opinion on one side or the other.

Who's side will you take?
Reviewed by: doug marino

It may have been a smashing success in London, but here in New York, a bit "closer to home" as they say, it probably won't fare as well.  The Brits probably enjoy laughing at our moments of weakness just a bit more than we do.  A monumental undertaking by playwright Lucy Prebble, Enron attempts (and quite frankly succeeds) at telling the story of Jeffrey Skilling and his downfall at the Company we all know as Enron. 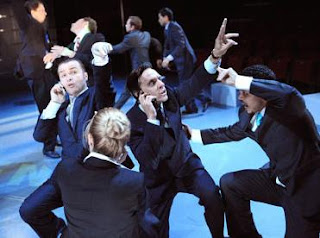 As the play unfolded, she (and the actors) all did a remarkable job at keeping in "interesting".  Lighting, music, dance numbers, and sophisticated digital looking sets all contributed to the "wall street" atmosphere.  Norbert Leo Butz nailed Skilling.  Gregory Itzin and Stephen Kunken as Kenneth Lay and Andy Fastow both turned in remarkable performances.  Marin Mazzie was superb as one of the few fictional (or more correctly stated, composite) characters.

The trouble is - they wove a complex tale.  There was no hero to route for.  While your senses were being bombarded with business terms, facts, figures, and jargon - the story simply lacked anyone or anything redeeming in the end.  My personal feeling is that they could have "created" (i.e. taken literary license) a "whistle blower" (which, in reality would not have been that difficult as the real story had the makings of one anyway). 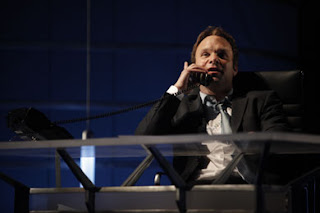 Overall - I (an accountant by trade) loved it, understood it, and appreciated what they had to say.  I am guessing that as brilliant as the storytelling efforts were, most people walked out of the theatre confused or angry at a time when the economy is once again in the toilet - hence resurfacing old thoughts of anger, resentment, and ill will towards corporate America in general.  At a minimum, some might wonder if Ben Brantley's mutual funds took a nose-dive the day before he reviewed it.
Reviewed by: doug marino

This play, another in what appears to be an extensive offerings of gay story-lines in the 2010 season, is not one of the better offerings.  While the cast was mostly cute and the tap dancing top notch (and surprising), the storyline was a bit contrived (some might say silly) and the choice of Jason Gaffney as the lead (Jamie Hollis) is odd.  While he's adorable and clearly a talented tap dancer - acting does not seem his forte.  Joseph Cullinane (Billy Haines) on the other hand proved himself to be Fred-Astaire-like and extremely graceful.

Truth be told, i left at intermission (as did several others).  Act I was simply too long, listening to the meek and childlike voice of Billy tell his story just bored me.  Were it not for some of the supporting cast and the incredible tap dancing, I'm not sure I would have lasted as long.   I'm sure everyone in this cast deserves a some applause, but the collection of talents seemed mis-aligned with the story.
Reviewed by: doug marino

A true off-off Broadway experience to be had down at 45 Bleaker Theatre.  This show is off-beat, clever, and intriguing to say the least.  It's a play by Alex Lyras and Robert McCaskill - performed solely by Alex Lyras - A true one man, multi-character show.

Each character is connected to an unseen character in each scene.  That unseen character becomes the character in the next - and as such - a diverse, meandering story develops as the story forwardly unfolds character by character.  Much of the play revolves around the airport - a ride to it, waiting in it, and coming home from it.  The only surprising, but quite dramatic element, was the climax of the last scene.  It seemed a bit out of the context of the rest of the play.  In the vernacular of the airport, it seemed like we had a very bumpy landing at the wrong airport.   While poignant, the last scene threw the entire play off course.  I left feeling i had been duped into something a bit more than i bargained for.
Reviewed by: doug marino

Okay, I'll admit it.  I went to see this show because of that adorable, boyish, young hunk, Michael Urie.  But I left with much, much more - An entire history lesson on the gay rights movement pre-stonewall.  The entire cast was magnificent - funny, awkward, serious, shy, and.. well... gay... all at the same time.

Playing at New World Stages, this play should not be missed by anyone - it's affordable, accessible, and consider it a bonus that you get to see Michael Urie up close and personal.
Reviewed by: doug marino

A long time in coming, the first Broadway revival of a 1960's classic.  A Neil Simon book, Burt Bacharah music and Hal David lyrics - how could you go wrong putting this one on?  Well, let me tell you - mis-cast the leads and don't update the book.

It's not like Sean Hayes and Kristin Chenoweth are not capable, they certainly are.  It's not like Rob Ashford is not a talented director, he most certainly is.  The problem is that we've picked "stars" to lead the show instead of the right talent.  Mr. Hayes is a comedic genius - not necessarily a singer - (although i must admit he's got a pretty decent set of pipes).  Kristin Chenoweth could possibly be one of the brightest stars on Broadway, but the role of Fran Kublick - questionable.

The dancers, the sets and lighting are all fantastic.  And if there's one person who steals this show out from under everyone - it's Katie Finneran.  With no more than 20 minutes on stage the entire time, she walks off to a virtual standing ovation right in the middle of the show.  Go figure.

Because this show is such a good romp and a light hearted love story - it's certainly worth seeing and the cast is certainly talented even if mis-cast.  I suspect despite the mixed and luke warm reviews, this one will last a short while.
Reviewed by: doug marino

Jason Hall has penned a mighty 90 minute dialogue between two estranged brothers who are forced to reunite after, as we slowly learn, his death from Guillain-Barre Syndrome (hence the title of the play).   The show is true storytelling at its best, with virtually no props or scenery and limited lighting.

Kudos to Curran Connor and Jason Jacoby for their fine performances.  Both actors are on stage together for just about the entire play - each taking a break for mere moments while the other has a brief monologue. 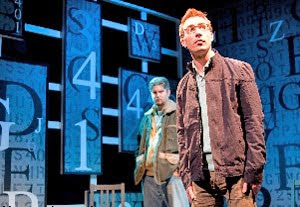 This play is about family, family issues, and the mess that happens in our lives and how life can grow more complicated despite our desire to love and be loved.  I've no idea where the idea for this play came from, but one might speculate the disease may have hit a loved one in Mr. Hall's family and thinking further about it - perhaps this play is somewhat autobiographical.  I'm not really sure, but one would assume the ideas, facts, or circumstances may have come from within.
Reviewed by: doug marino

It's loud, irreverent, but not pointless.  A story of teenage angst is told thru the music.  Conceived in the Bush era this show is both artistic and uncomfortable at the same time.  John Gallagher, Jr., Stark Sands and Michael Esper lead the cast in a 90 minute multi-media, alcohol, drug, and profanity laced tour de force.

Green Day may not be your favorite band and watching a group of kids come of age in different, yet predictable ways may not be the ideal night in theatre - but the "shock and awe" on stage might just win you over.   Will it last?  I think at least as long as Spring Awakening.  Longer?  Not sure.
Reviewed by: doug marino

A thoroughly enjoyable multi-media evening spent learning about the musical legend, Stephen Sondheim, at the legendary Studio 54.  My only complaint is that I spent over $400 bucks for a subscription to the Roundabout Theatre company - expecting to see great plays and musicals - and instead i get this.  It's cheap to produce and not what I signed up for. 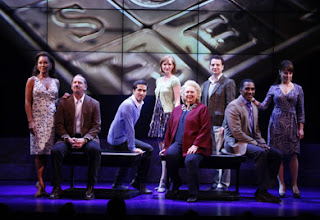 Thumbs up to Barbara Cook and Vanessa Williams - two great voices from two generations.  Kudos to Leslie Kritzer and Euan Morton who solidly rounded out the cast and brought many laughs.   Norm Lewis is not stranger to the stage, but I'm not sure he was right for this role.  And then there's Tom Wopat.  Why people think he can sing and act, I'll never understand.

Mr. Sondheim materializes all evening on the fancy-schmancy TV monitors that morph all over the stage the entire evening.  He sets the scenes, tells the story and even makes us laugh and cry in the trip of memories down Sondheim Lane.  One wonders if he's so busy that he couldn't make an actual appearance live on stage in the very show that is a tribute to him.  Oh well.   The talent  gets an A but Roundabout gets a D for effort on this one.
Reviewed by: doug marino