Itamar Moses strikes gold again.  This time, on 42nd Street at Playwrights Horizons with his latest contemporary work, Completeness.  Mr. Moses has demonstrated his contemporary talents several times before off-Broadway in at least two prior shows that I have also thoroughly enjoyed, The Four of Us and Back Back Back.

In this incarnation, Mr. Moses has penned a complex work that entangles our quest for love and relationship with science and mathematics.   Fear not, his clever dialogue is both instructive and engaging - to the point that you begin to think you are going to walk away being able to solve the TSP (Traveling Salesperson Problem, for those of you who might know). 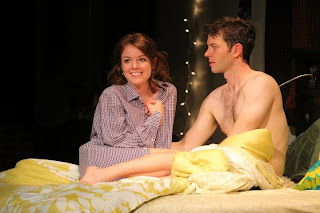 Karl Miller (Elliot) and Aubrey Dollar (Molly) are thoroughly engaging and believable as a pair of slightly awkward, mostly normal, and very intelligent grad students (clothes both on and off) engaged in their respective quests of computer science (Elliot) and biology (Molly) - or is it a quest for everlasting love?   Or both?  Is the answer out there just waiting to be solved for?  Or do you just take the chances as they come and jump in hoping it till work?

One very awkward moment near the end of the play arrives at a time in the play when both the relationships AND the math/science "blow up".  The play literally stops, and two other characters come out and talk to the audience to allegedly "stall for time" while the show takes a technical break to "reboot the board".  Quite unusual - and by a poll of various people who said they knew - it was part of the play - not a real glitch.   Symbolic, perhaps.  Thoroughly distracting - yes.   I wanted to be talking about so many other aspects of the play afterwards but just couldn't leave this "moment" alone.
Reviewed by: doug marino 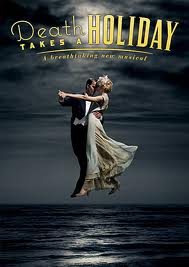 The Roundabout Theatre Company has done it again.  A powerhouse cast, a delightful and lightly operatic score atop a simple and enchanting book are just a few of the rewards that are awaiting audiences at the Laura Pels Theatre this summer.   Death Takes A Holiday is a "breathtaking new musical" inspired by the 1934 romantic drama (play) of the same name.   Elegantly, simply, and ingeniously directed by Doug Hughes, the musical sweeps you off your feet, effortlessly glides thru its paces bringing you on a brief and entertaining journey the Villa Felicita on a lake in Northern Italy in the late summer of 1921. 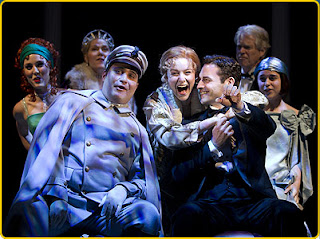 What makes the journey so effortless and so incredibly enchanting is most certainly due to the cast of characters - which includes, on such a small stage, a plethora of veteran Broadway talent in addition to some fresh, young blood - all perfectly cast in their roles.   Jill Paice (Grazia) pulls you into her heart with her song from the very first moment and refuses to let you go the entire show. Kevin Earley (Prince Nikolai Sirki/Death) quietly sneaks into the picture and sweeps you off your feet.  His flawless vocals packed a punch and quite literally blew the roof off the house.  Of note, Mr. Earley stepped into the role shortly after the original lead, Julian Ovenden, stepped out due to an ongoing throat illness.  The very fortuitous Mr. Earley played the opening night and has done so every night since. 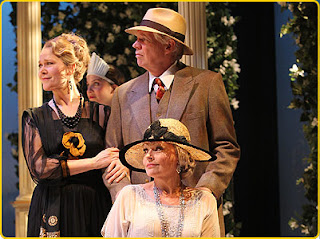 The comparison to the juggernaut, Phantom of the Opera, is inevitable, but this show succeeds without all the weight and unnecessary baggage that Phantom brings along with it.  Operatic, yes, oppressive, no.  Hughes injects the story with dashes of comedy, a modern sense of love, family, and frivolity.  A fine example of this clever infusion is the character of Fidele - played to its maximum effect by a quirky and adorable Don Stephenson.

The story, quite simply, is a love story.  Death takes on a human (and quite handsome) role to find out what all this living and loving nonsense is all about.  He, quite literally, takes a holiday from the his daily grim tasks.  As you would expect, he falls in love and what happens next is... well... I think you know.   While Death might be eternal - you only have a limited time to catch it on Broadway - playing now thru September 4th.
Reviewed by: doug marino