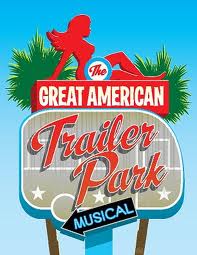 Ok - so the title just about gives away the entire subject matter of the show! If ever you were shopping in Kmart or walking thru South Florida thinking "White Trash" - well this show hits on just about every reference, joke, and stereotype associated with the aforementioned topic in both dialogue and song lyrics... (one lyric laments "Like clothes from Kmart, my life is falling apart"). 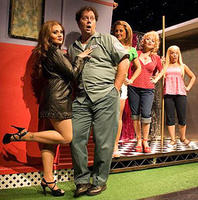 The characters - one stripper, three "gals" (think Dolly Parton, Jessica Simpson, and a trashy version of Cynthia Nixon), one overweight toll collector (think John Goodman) and his wife (an agoraphobic trailer-wife for 20 years) regale us with their stories via song and dance at a mobile home park in South Florida known as Armadillo Acres.

Now, despite the subject matter (you're probably thinking "low quality") - the actors are all virtual powerhouses and despite the "kitschy" surroundings, run a tight show. Occasionally speaking directly to the audience members and once zoning out into a "Sally Jessie Raphael Talk show dream sequence - - there is a real story behind the scenes - - and it's a simple message - - True Love Conquers All!

For the price of cheap coffee maker ($30) - saunter over to Dodges Stages and catch a performance of "The Great American Trailer Park Musical".
Reviewed by: doug marino 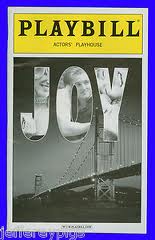 It's all about love - the joy and "rush" you get from that first true love and the whirl-wind events that inevitably follow.... Surprisingly musical in its delivery (for a romantic comedy) - especially the soft, tender voice of Gabriel (Christopher Sloan), who opens the show with a Cole Porter classic with romance and love in his heart... a tale which is revealed in the show as a flashback to the previous year of his life. A small homage to classic romance-tunes including: "I'll be seeing You", "Let's face the music and Dance", "Misty", "The way you look tonite". You also ca

n't miss Ben Curtis ("the dell dude") who seems a bit type-cast as Christian (cute and dumb). Paul (Paul Whitmore, last seen in "The Normal Heart") plays the neurotic, insecure, over-opinionated, uber-gay grad student who falls in love - the subject matter of most of the play... Subtle political undertones, plenty of chuckles, a few cool tunes, one disco ball, and a dose of romance and reality ....

For a change of pace, pay the $30 bucks and spend a evening at the Actor's Playhouse in Greenwich Village and enjoy "Joy"
Reviewed by: doug marino