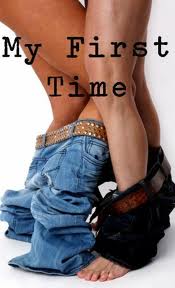 A multi-media experience. Four actors on stage telling the thousands of stories, snippets, and one liners about the age old "first time". Yes - the reference is to the first time you had sex. Was it good? Was it fun? Who laughed? Who farted? Who's mom walked in? Did it hurt? Oh boy... it goes on and on... and covers just about all kinds! 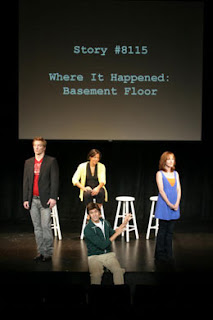 It's a bit like the vagina monologues - - the actors speaking to the audience telling stories. They take a poll in the audience before the show - and they flash the results up during the show. They have a projector that beams facts and figures above the actors heads in between the vignettes. In our audience there were 2 virgins too! 90 Minutes isn't even enough to cover all the possibilities, but it is certainly enough time to entertain and inform.

If you need a night of plain old fun - take in a performance at the New World Stages! Virgin or not - you will enjoy.
Reviewed by: doug marino 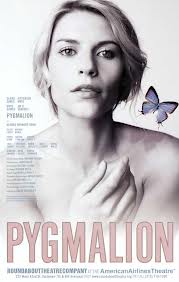 Clair Danes pulls it off in style! She's been on Broadway before, but never like this. She's a tough, street smart gal in England, Eliza Doolittle, turned into a lady before our eyes by Jefferson Mays as Professor of Phonetics, Henry Higgins.

The play, as many of you know, is what the musical My Fair Lady is based on. Sans music - it's still a powerhouse. George Bernard Shaw's words flow like water - ever eloquent, filled with energy and packed with meaning. I've not seen the musical or the play before and I have to report i thought that Henry Higgins, played by the ever affected Jefferson Mays was just a bit to odd for my liking. Having nothing else to compare against, i don't know if it's Jefferson being his usual "odd" self, or perhaps exactly how Shaw envisioned the role.

Roundabout seems to have yet another success story with this one. I doubt it will be a "sell out" smash hit, but it is certainly a treat for those who are hungry for a classic.
Reviewed by: doug marino

The 2007-2008 Season at the Manhattan Theater Club opened with a scam! Well, the show was about a scam anyway - a philatelist (stamp collector), a suspicious deal maker, a desperate woman, and two rare stamps from Mauritius.

The cast was led by last season's darling from Blackbird - Allison Pill. Also on stage was Katie Finneran (Noises Off and Pig Farm), Bobby Cannavale (Will's Boyfriend on Will and Grace), and Dylan Baker (I know him as one of the Law and Order "High priced attorneys - Sanford Rems). 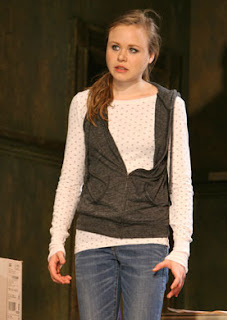 My subscription is a preview subscription - so let's just assume the show will get tighter, sharper, and more comfortable with a little time. The actors all seem fully capable and the writing appears to be high quality. The comedy at times seemed a bit forced, but again, that will most likely mellow out with a few more weeks of performance.

The story, however, leaves me with a few questions that were never answered. There were a few "guns introduced in act one that were never used in act two". The biggest one was the mysterious story about why the family broke up. Abuse? Rape? Murder? Something else? We hear about it in act one, but never really find out the details - - and specifically - the plastic bag? Is there a spin off of Law and Order in the works or what?

I frequently found myself asking "why don't you just go somewhere else to sell the stamps?" For the length of the show - I would expect a deeper plot with a bit more character development. Although, that was partially offset by the quality of the acting and the general twists of the story.

A little mystery, some intrigue, and a murky past to all the characters hold your interest - And it will get you looking at the stamp on your next letter!
Reviewed by: doug marino 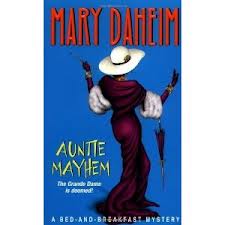 A gem down at the Wings Theater on Christopher Street. It's a small production - but one to be proud of. Tackles the topic of gay teens thrown out on the street - who will take care of them? What becomes of them? Who is there to help them? 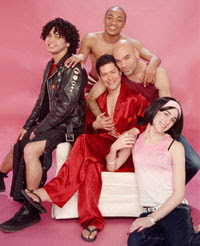 Well, in this case - Auntie Mayhem (i am thinking a take off on Mame... but who am i to say). Felony Mayhem (her stage name) takes in 3 gay teens off the street - one by one... and raises them as her own with her sexy partner - BoBo.

The leading men were funny, sexy, and damn cute with their shirts off. And the kids - who are not really "kids" - were great. I can't think of a better way to spend a Sunday afternoon then supporting the arts by watching a show that one a host of GLAAD Awards.

Do your part - and get a ticket to the show! If nothing else, it's easy on the eyes...
Reviewed by: doug marino 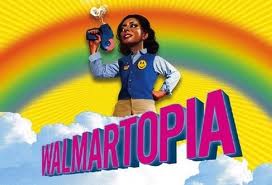 Well, if you're going to see Sam Walton immortalized, think again - this little gem is a WalMart Basher! I was pleasantly surprised at the top notch production quality down at the Minetta Lane Theater. The cast was reasonably talented and the sound, lights, and scenery were great for an off-Broadway production!

Now - about the story - well... it starts off just bashing WalMart - sort of an entertaining little storyline. It's funny, predictable... well that is until this mad scientist kept in the basement of the WalMart by the CEO is unveiled. He's got a time machine - and they want to send someone into the future to find out what the trends are and how to capture them NOW! They do actually send someone into the future (the other part of the story has the Mom and Daughter struggling to make ends meet working at WalMart - blah.. blah.. blah). It's this very Mom and daughter who get blasted into 2037 only to find out that WalMart runs the planet! Quite an entertaining thought - but c'mon...

The mad scientist is hysterical - a show stealer... the Peter Allen of the show, you might say. The board of Directors is mildly amusing (always rolling in chairs and some women dressed in men's suits!). Mom and daughter are quite talented - reminiscent of Tanya Pinkins of Caroline of Change. There's the Asian lady always dressed to the 9's... Lisa Ling, anyone? Oh, and let's not forget the head of Sam Walton - brought back to life - another far fetched idea - but generally funny. I guess we were supposed to learn that Sam was really a red-neck who made it big... not a very PC guy, if you know what i mean.

Overall - i left with a smile on my face - but kept wondering - Why is WalMart not suing the pants off these guys! Free publicity - good or bad.. is still free publicity i guess!
Reviewed by: doug marino 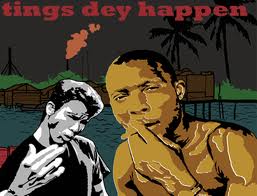 A terrific one man show at the Culture Project that entertains and educates about Oil Politics in Nigeria Delta. A fascinating review of the year that Dan Hoyle (writer and performer) spent in Nigeria as a Fulbright scholar in 2006-2006 . The characters he brings to the stage are a pastiche of ambassadors, local government officials, ex-pats working for oil companies, and locals of the delta.

The poignant piece, filled with lots of humor, tells the story of money, politics, corruption, and oil - and how they are all intertwined. It should be noted that Dan speaks in virtually "perfect" Pidgin English - quite a feat for the talented white boy! At times when he loses you (probably on purpose) he calls on a character in the play who is actually the stage manager to explain what just transpired - quite funny.

Quite a talented young man! I highly recommend this play to anyone who like a good story told to them. It's 90 Minutes with no intermission - and before you know it, he's taking a bow.