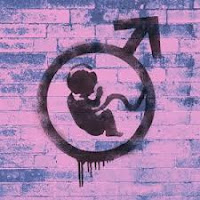 Playwright Robert O'Hara should never be accused of being timid.  In his bold, audacious new play, Mankind, he envisions a world with no women where men who get pregnant invent a religion that masses follow and interpret far beyond their expectations.

While at first blush an absurdest comedy, as you think more and more about it - it's quite the skewering of organized religion as we know it today - with all the stories, tales, and utterly bizarre "lessons" in the bible that we are expected to believe. 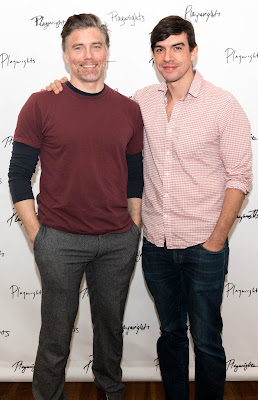 Mr. O'Hara's audacity is backed up by the ferocity of the cast portraying the denizens of this futuristic world.  Bobby Moreno (Jason) and Anson Mount (Mark) are "fuck-buddies" (Bobby in a jock strap in the opening scene is worth the price of admission) seemingly enjoying it thoroughly, when Jason finds out he's pregnant (not unlike how it happens today). Although they discuss "getting rid of it" in a scene we see replayed over and over in the play, abortion is illegal and both of them end up in jail where Jason gives birth.

If the story ended there it would be a big deal - but it goes on that Mark and Jason basically invent an entire religion because their baby was a GIRL (after they had all become extinct, remember) and she dies days after birth due to the air quality (apparently it was the air pollution that killed women off altogether).  What follows is an even more absurd path that Jason and Mark end up being revered by feminists (all men, seemingly) around the globe and their words and stories are turned into a bible of sorts - not unlike religion as we know it today may just have begun too.

The difference here is that Mark and Jason fully admit they made the entire thing up.  Perhaps we'd be better off if someone admitted to that long ago too.
Reviewed by: doug marino