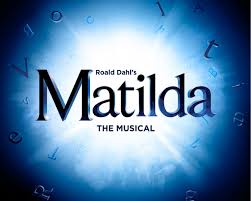 Those Brits have a unique taste in musicals.  We Americans like sappy stories and saccharine musicals.  We like sad and depressing usually only in our plays.  Those Brits tore up those rules when they brought Matilda, a musical, to the stage.  It's likely the kid factor that blinded us to the awful plot and lackluster score.  Kids bring a cute-factor that nobody can deny.  A whole state full of them can't be easily denied.  Despite the aforementioned factors, this lackluster show has taken the world by storm.

In America, we have all see the TV commercials - non-traditional and filmed outside the theater dancing and exposing the only memorable number from the show - When I Grow Up.

Without a playbill given out in the lovely London Theater I have a hard time crediting the cast but most of them deserve your applause and respect for solid performances.  These young girls are still taking London by storm.  The fad seems to be over in America for now.

The Brits often try to re-take America by storm and if the recent string of British Flops will tell you, they aren't succeeding very well.  Matilda lasted much longer than the rest but now if you want to see it you'll have to go to London.  This is probably best.
Reviewed by: doug marino