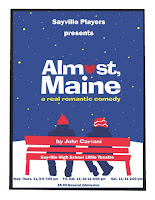 Even if this was a High School production, it was a play that I had heard of but not yet seen.  The play, written by, now, Broadway musical star, John Cariani, (Something Rotten), just happens to be one of the most produced plays in the United States according to Wikipedia!  I can now see why this is the case.  It is essentially a bunch of vignettes with two characters who all live in the small, fictional, remote, non-coastal town of Almost which is in Maine.  It's quaint, it's cute, and it's very manageable for amateur actors - 9 vignettes - short and sweet - easily navigable.  It's light hearted and offers some alternate looks at relationships.    It is a slice of life type play - love and romance is the theme - good, bad, future, past, and current. 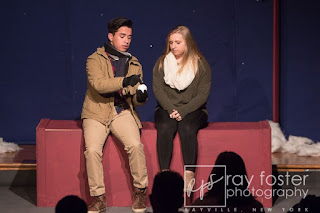 The Sayville Players is the drama group at Sayville High School and they were able to showcase their many talents throughout the evening in the "Little Theater".  Full disclosure, I was a card carrying member a long, long time ago under the supervision of Mr. Stephen Hailey. Now it seems to be someone named Mr. Shaw.

For whatever reason, these kids seemed much more at home and comfortable on stage than I ever remember being.   Whatever the case, it was another chance to see the work that I had not previously seen of a great actor and writer who has a long, solid career ahead of him.

I would venture a guess that many of the Sayville Players do also!