In its summer installment (delayed no doubt due to Second Stage's introduction of Dear Evan Hansen) we are presented a delicious yet bizarre  "3-Act" play.   I say 3 acts as opposed to the 90 minute no-intermission presentation it actually was because Leslye Headland's drama was played in 3 parts - the 1st 30 minutes was engaging, absorbing, and mysterious, the 2nd 30 minutes were dull, directionless, and meandering.  The last 30 minutes were flat out bizarre - culminating in a most unexpected and incongruent ending. 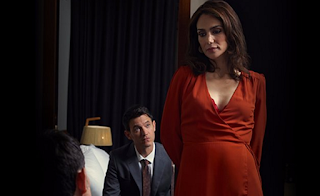 For a summer installment it was the equivalent of reading a Mary Higgins Clark mystery on the beach.  Staring the always engaging Annie Parisse (Shellie) and the dashing Adam Rothenberg (Dex), this show started out with much promise but devolved into a bizarre ending.  In the middle we took a ride through two seemingly normal people's lives and find out that nothing is what we first believe. Kudos and a shout out to John Procaccino who played a cantankerous dying parent (Fred) with aplomb.  If the fantasy of meeting your prince or princess in an airport is something that interests you, perhaps this play if for you.   If you would be disappointed to find out that much of what transpires at the airport is a lie, then you may be sadly disappointed.

And finally, and fittingly, a bizarre note to the producers - when the play's script goes to the trouble of naming a hotel room # in the dialogue, why would you put a hotel room key with a different number on the playbill??  I'm baffled.  I'm really just glad this layover experience was a brief 90 minutes, and we were dumped out on West 43rd to find out way home on schedule.