Occasionally, it happens. I see a play and walk out with a totally different perspective than Ben Brantly, Charles Isherwood, and the other critics. They loved it.

Don't get me wrong - Jane Houdyshell is pitch-perfect in her portrayal of every one's favorite admin in the office - she comes and goes like the Swiss railroad, she guards her pens, chitty-chats with the staff and her friends and family all day on the phone while allowing occasional work task to creep in, throws the un-wanted callers into voicemail for the boss, and keeps a watchful eye over the comings and goings in the entire office.


Other than the bright spot of Jane - this play was a disaster. The first 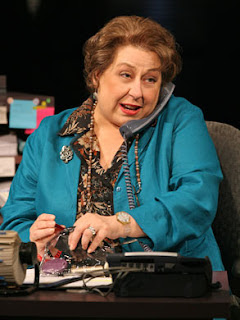 scene took 10 minutes to unfold - and went nowhere. You had no idea what Robert Foxworth is talking about.


Then the next 50 minutes were spend watching meaningless and pointless conversations take place and leave you asking after over an hour - - "Where is this thing going"? You are supposed to infer after a while that some form of futuristic torture is in play.

Not even in the final 15 minutes to they even get to the point. And then - after you finally convince yourself that you were right in your vague assumption thus far, the play ends!! What becomes of our favorite admin? You can only assume her dark fate.


You never saw the boss again. You find out the other co-worker ran away. And you come to learn that that the "Northeast Office" and the "Central Office" are nothing more than a proxy for the CIA... or the FBI... of some vague combination of Abu-Garave in Iraq.
I'm sorry Ben, Charles, and all the others who loved it. I think you may have dozed off and got the funny lines in the beginning and the "dramatic" ending. I couldn't even bring myself to clap at the end. Mostly because the person next to me asked two or three times in the dark "is that it"?
Reviewed by: doug marino 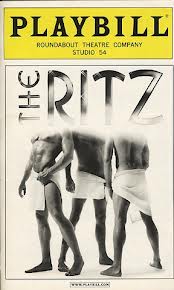 Terrance McNally took on a controversial topic in 1975 on Broadway with the debut of The Ritz - a gay bathhouse! Well in 2008, it's not quite the same "gasp" from the audience regarding the topic. The movie was made shortly following the Broadway debut - staring Rita Moreno and Jerry Stiller. Coming back to Broadway in 2008 we find Kevin Chamberlain and Rosie Perez headlining the show. 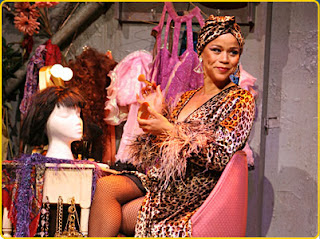 Well - it's funny. And the shirtless young boys roving around the clever multi-level bathhouse set certainly hold your eye. But the show more reminded me of a marginal episode of Three's Company or Laverne and Shirley.

I did also enjoy the cabaret performances- which i have come to understand are meant to remind you of the starts to the careers of such singers at Bette Midler at the Continental Baths. Notwithstanding the farcical plot, I'd advise getting a discount ticket to see it. It's worth some moderate price just to make eye contact with one of the boy-babes roaming in and out of the steam room.
Reviewed by: doug marino 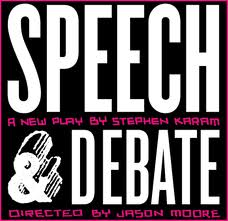 A new "cutting edge" oriented space opened this month at the Roundabout. Speech and Debate, a new play by Stephen karam, christened the space. The new space is a new initiative by Roundabout to cultivate new works by emerging playwrights by giving them the opportunity to present their works as "full scale" productions with all the resources that the Roundabout organisation can bring to the table. 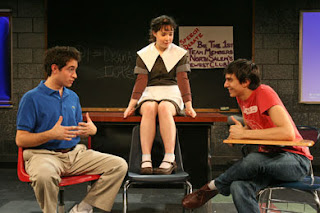 Speech and Debate stars 3 up-and-coming actors - Gideon Glick, Jason Fuchs, and Sarah Steele. They portray 3 not-so-average teens in school who are all linked indirectly to a sex scandal. They bond together for various reasons to form a Speech and Debate club to express their ideas. The play is actually presented in the various segments that align to the categories of classic speech and debate. Gideon plays a gay teen who is out, but doesn't want to bring the story to light to cause himself any embarrassment. Jason plays a high school newspaper reporter digging for the story - and making deals along the way. Sarah plays the eclectic student, blogger, and debate club leader.
The play, performed without intermission, provides an insight into the troubles of youth today and the issues that plague society overall. You'll leave the theater thinking. That's how you know it's a good show.
Reviewed by: doug marino 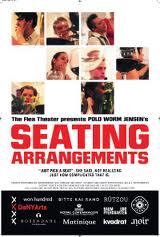 There's a lot of Experimental Theater at The Flea. Seating ARRANGEMENTS is one such performance. You walk into the theater space and notice that there is a large horseshoe shaped banquet table with seating for about 16 - - and there are only 8 actors! You are asked if you want to join the feast. After a nervous "sure, why not", you start to think - are they going to talk to me? Am I somehow going to become part of this show? Are they serving food? The answer to all these questions is yes. But fear not - you won't be cross examined! 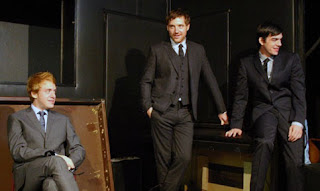 you! It's not exactly a scripted performance, but not exactly stream of consciousness either. Based on the short story Babette's Feast, the 8 actors speak directly to the audience as if we are all there part of their dinner party. They interact with each other as if they are in another time and place. Time, location, and characters bleed together.


The underlying concept is about what happens around the dinner table - how we all interact, the inappropriate things we say, or the things we don't say. It's a study in psychology and sociology. It's about topics that inevitably get broached - Religion, Politics and Love - sometimes appropriately, sometimes not. 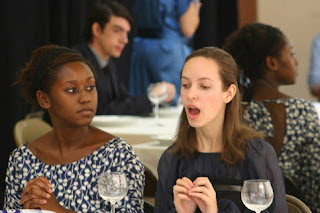 Remarkably - I learned afterwards that there was no real script for this show. The actors all developed the stories based on their own experiences and beliefs. They melded them together in workshops and rehearsals. There's a violin, a rapper, a national anthem, and a dance. There's love, hope, revenge, and desire. It's a slice of life both current and past.


Fear not - they serve wine. Drink up - and don't be shy. Wink at the adorable Max or chat up your cute neighbors. Who knows what might come of it.
Reviewed by: doug marino 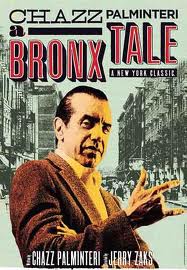 Chass Palminteri makes his Broadway debut in his own semi-autobiographical show - A Bronx Tale. A classic story teller, Palminteri regales us with about 90 minutes worth of stories from his "rough" childhood on the streets, on his front stoop and in his neighborhood - up @ 187th.

Funny, poignant, and entertaining, the characters come to life as described by Palminteri - most centrally to the story his gangster friend who took him under his wing. There was no Soprano's in his day, but the stories ring similar. In his case, the story revolves around choices and how each of them affects the rest of our lives.

Take a night out and enjoy an evening of storytelling by one of the best.
Reviewed by: doug marino

Lucy Thurber has penned a powerhouse - now on stage at the Atlantic Theater Company. Scarcity is the story of intense frustration and struggle. Struggle with family, choices, poverty and alcohol. Frustration over how our position in life is affected by those choices- and the struggle to escape and the collateral damage left behind. 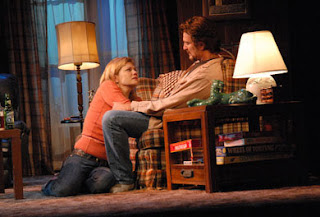 The poor family has a smart kid - who takes advantage of an over-attentive teacher to "get out" from under his alcoholic father and ocassionally delusional mother. Kristin Johnston (3rd Rock from the Sun) and Michael T Weiss (The Pretender) preside over the sad family and mom and dad. I saw Brandon Espinoza (u/s) as the young man at the center of all the energy and Meredith Brandt making her off-Broadway debut (at age 11) as the youngest member of the family - who in many ways was the smartest - - and certainly the most vulnerable.

The family dynamic might remind us of the television show Roseann - the twisted ways that love weaves into these families. The hope offered by escape. The sadness at the situation, and the despair of the young ones left behind.

You might not leave with a smile on your face - but you will certainly enjoy a powerful evening of theater.
Reviewed by: doug marino