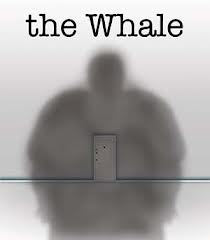 A brutally honest, raw, and sad tale told by Samuel D. Hunter over on 42nd Street at Playwrights Horizons.  What do you get when you combine a morbidly obese man, an estranged daughter, a deeply guarded secret, a young Mormon boy, and a mysteriously  connected lady-friend?    That's a lot to be simmering just below the surface.  Under Davis McCallum's direction, The Whale slowly simmers, occasionally bubbles and eventually erupts into a full boil just as the curtain falls. 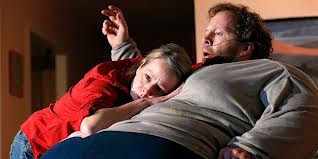 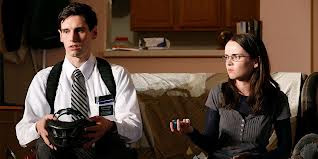 Charlie (Shuler Hensley), literally inflated in a humongous fat-suit, does a shockingly realistic job at portraying a 600 pound man on the verge of a "natural" death due to his weight.  In his final days, he wishes to reconcile with his estranged wife and daughter he last saw when she was a baby.  Why has he grown to this size?  What has driven his eating?  Enter stage left, Liz (Rebecca Henderson).  She's his life-line, a friend with an attachment we only come to know later after we meet Elder Thomas (Cory Michael Smith), a young Mormon missionary who eventually crosses paths with Charlie's young,  angry, and introverted daughter, Ellie (Reyna De Courcy) and her mother, Mary (Tasha Lawrence).

As the tale wrapped in allegorical references to Moby Dick unfolds, the proverbial plot thickens and the reasons and root causes we have all been waiting for begin to unfold.  Jane Cox (lighting) and Fritz Patton (sound design) deserve a shout-out for the excellent mood-heightening effects of the belly of the whale.
Reviewed by: doug marino

If There Is I Haven't Found It Yet 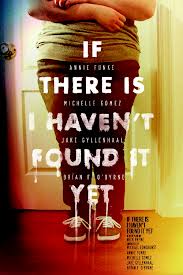 Pretty much a 'Debbie Downer' over at Roundabout's Laura Pels.  I spent a lot of time trying to figure out who was related to whom and why we were all here.  As the vague plot unfolds (painfully slow) details, possibly on purpose, seem to be omitted.  I am pretty sure that was Playwright, Nick Payne's intention. Indeed it added a sense of despair to an already bewildering and depressing statement presented about one family's failed attempts at... well... family.

Jake Gyllenhaal (Terry) takes a stand out lead in this otherwise lackluster production.  Brian F. O'Byrne (George) has a more minor character but clearly does his part to mire the family down. 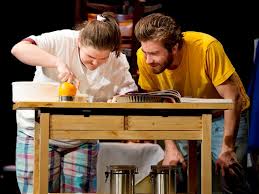 Director, Michael Longhurst, takes a big risk by immersing the play in water - overhead, and on-stage.  I doubt Mr. Longhurst could foretell the impending storm called Sandy, but in retrospect, his staging has an eerily dual impacts.

Although the concepts were seemingly well integrated with the staging - as disturbing as throwing the set pieces in the moat when they were done with them - I left the theatre with mixed feelings - - slightly satisfied at the overall staging and presentation but mostly disappointed at the pace and sense of vague-ness. 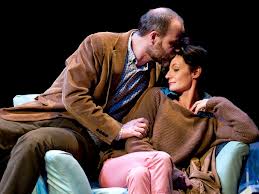 I say slightly because at some level, this work is a visceral, raw, and powerful attempt at telling an honest, deeply disturbing, and sadly quite common state of the family today.  I'm trying not to confuse that sadness with the pace and presentation itself.  That balance can be hard to identify and recon with.

... I haven't found it yet either.
Reviewed by: doug marino