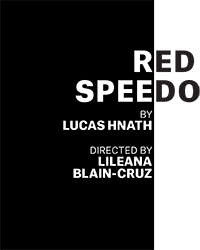 After a tremendously impactful showing at Playwrights Horizons this fall with Christians, Lucas Hnath bring another of his works to the New York Theatre Workshop stage with less than impressive results, Red Speedo.

Mr. Hnath used a different writing style in this show.  In Christians, it was long preacher-like paragraphs.  Here, he has imbued this play from cover to cover with staccato, interrupted dialogue between two characters - as if each of them is talking a mile a minute but getting only one or two words out before being interrupted by the other - over and over and over.  The result is unfortunately that the actors would have had to rehearse for weeks and weeks to get this style to feel like it was naturally occurring.  On paper it likely looks like a frantic, energetic, heightened dialogue.  On stage, it merely appeared like a machine gun mis-firing. 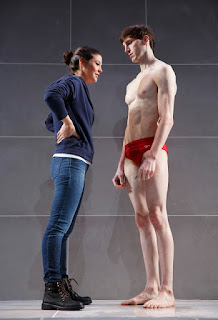 In terms of casting, whomever was responsible for this NYTW production cast a beautifully tall and lean muscle boy as Ray (Alex Breaux) - not so much a swimmer tho.  It was distracting.  He wasn't beefy and V shaped enough (believe-you-me he was drop-dead gorgeous nonetheless).  In another interesting casting decision, his brother Peter (Lucas Caleb Rooney) looked nothing like him.  I know we all don't look alike but it just seemed odd and lacked authenticity.  Coach (Peter Jay Fernandez) was a bit too serious and stoic.  I didn't sense a reason for him to be so rigid, except that the machine-gun dialogue almost required it.  Ray's complicated girlfriend, Lydia (Zoe Winters), turned in a fine performance but Mr. Hnath might want to stop referring to her as a sports therapist, as I initially thought she was a shrink (she was a physical therapist).

The moral question of the play was unexpectedly complicated.  I expected the performance enhancing drug topic. What I didn't expect, and very much appreciated, was that Ray, the gorgeous Olympic-qualifying swimmer, was dumber than a box of rocks.  It added the dimension of a lack of a choice - that he needed to do this and it was much more instinct than calculated, intelligent decision.  It really made me think about education and emotional development.  Ray was clearly a hunk of meat who could swim but do absolutely nothing else.  Peter was clearly the sleaze bag from beginning to end and it was artful to watch how the coach transformed right before our eyes.  Three very different personalities and how they all interact is a fascinating study. 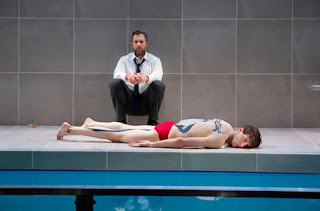 Now, the white elephant in the room - Hello?  Drug Testing??  Olympic athletes are tested to the moon and back.  Mr. Hnath should have done a better job at explaining this away rather than just hinting at how the testing focuses on levels from test to test rather than a substance itself.

Overall, Mr. Hnath's work presents an universally present problem in all sports and culturally relevant decision making process.  Like everything that is a bad idea, things don't usually end well going down this path.  And Mr. Hnath clearly agrees.
Reviewed by: doug marino