A true very raw and tender story penned by Anna Ziegler is being presented on stage by Keen Company at The Clurman Theater on Theater Row.  At just over 90 minutes, this show packs a powerful and real punch. 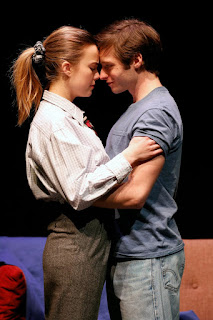 Walking into the theatre, the first thing you notice is the mirror image set hanging above the real set on the floor (Sandra Goldmark).  The mirror image, only upside down.  This is much like the life of Adam Turner (Bobby Steggert).  Mr. Steggert plays the titular boy of the play - actually born a boy but after an accident during circumcision, surgically altered to a girl and raised as such by his deeply caring (if ignorant) parents.  Nobody really talked about or acted on these things and it was a time where a doctor with a theory had some sway in the public discourse.  In his teenage years, he rejected the identity and after surgery re-emerged as a boy... (mighty easy on the eyes, i might add).

Mr. Steggert plays the dual role of Samantha (growing up age 6 thru 13) and Adam (age 23) in the current time.  Through alternating flashbacks and current scenes, we see Adam today and learn of his struggle and anguish growing up.  We learn of his parents who cared dearly for him and through this play are portrayed as nothing more than caring parents who tried to do "the right thing". 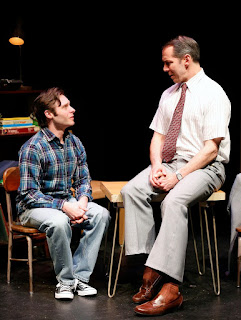 Mr. Steggert alternates between a wounded man of 23 struggling to love a girl and a tortured little girl who somehow knew she didn't fit in even though she didn't know what was wrong. Tough, tender, raw are the words that come to mind repeatedly when observing Mr. Steggert in his fine portrayal of the little boy trapped inside this little girl.  Confronting the doctor later in life is an eye opening and tough scene and one could sense his trepidation in the meeting.

Supporting Mr. Steggert  aptly are his mother and father (Heidi Armbruster, Ted Koch) and the love of his life, (Jenny) Rebecca Rittenhouse.  His doctor for these many years, (Dr. Wendel Barnes) was played earnestly by Paul Niebanck.

I cannot imagine the anguish and torture this young boy must have endured growing up.  You can't blame his parents.  You can only partially blame the doctor. Although he never admits it in the play, the accusation is made that he put experiment over patient, but that is never proved or admitted, at least not in this play.
Reviewed by: doug marino