a Man and his Prostate 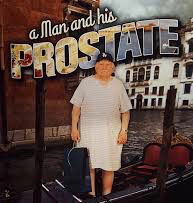 Over at the cozy stage at the Metropolitan Room, where we usually hear them crooning away into the night, this past weekend saw a giant of TV and Movies get back in the saddle and give a "test run" of a new one man show that seems tailor made for him.  The indomitable and known to be curmudgeonly Ed Asner dives into a role that only a man of his age can. 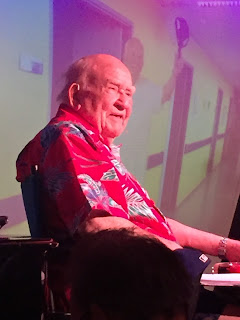 Written by but performed by Mr. Asner, is the tale of an older gentleman and his bodily functions or lack thereof in the pee department.   It's about the prostate, young man.  You don't know anything about it, but you will.  Trust me.

Although not disclosed except in the very fine print, this is presumably Mr. Weinberger's story, not Mr. Asner's.  But you sure as heck wouldn't know by listening to him weave his tale seated in a simple director's chair on a bare stage dressed in traditional Florida retiree garb.  After all these years, Mr. Asner still has it.  Nobody can tell a story like that big old bear, Ed.  Not much has changed since his days on Mary Tyler Moore.  He's a hard hearted yet totally lovable lunk.

With slides loaded in the deck to project at various points and his cane in hand to point out the finer details of an anatomy diagram (yes, this one isn't for the kids),  Mr. Asner takes you on a journey to Italy and back - less a few bladder stones, of course.

Lovable, Curmudgeonly, Cantankerous, Tender, and Honest - Mr. Asner has it all.  And you'll leave rooting for him and his penis too.
Reviewed by: doug marino

In what might be the most anticipated production of the season, Roundabout's 50th Anniversary, Noises Off hits the boards this week at the American Airlines Theatre.

I saw the last NYC incarnation of this gem 14 years ago - Click Here - with Peter Gallagher, Patti Lupone, Katie Finneran, TR Knight, Faith Prince, and Edward Hibbert.  Needless to say I have fond and vivid memories of the hilarity that ensued.  Of course when I saw the show for the first time I had no idea what was going to happen - this time around, I sort of knew what was going to play out. 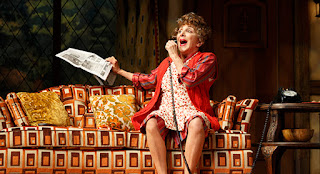 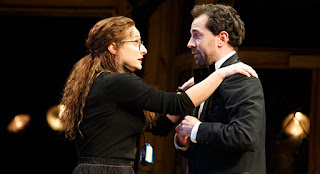 Anyone who knows anything about Nothing On (the play within the play) knows it is a physical comedy inside the physical comedy Noises Off - Three progressively "worse" acts repeated with disastrously funny consequences.  Timing is more than half the battle and tuning the characters just right is the rest.  I'd say they did a great job at the first part - the timing and physicality was nifty. The set (Derek McLane) was quite literally exactly what I remembered it to be - as if they pulled it out of storage.  What the production lacked, I thought, was a sense of mad-cap pace and hilarity.  It was almost very deliberate and plodding.  Certainly Ms. Martin had moments of glory - mostly in Act I as she labored over the sardines and later when she got tangled in the phone cord.  I remember TR Knight having a bigger part than Mr. McClure - and I don't know why.   Ms. Hilty delivered those stilted and quite literally memorized lines perfectly - and by perfectly I mean at just about the most incorrect time and always mugging to the audience like her character is supposed to.   This time around Mr. Scott walked around the entire theater including the mezzanine with his booming director's voice and I don't remember Mr. Gallagher doing the same except for right down front.  There were plenty of stars in this production although none of them shone overly brightly.  There was plenty of talent and great timing in this production, but nothing transported me.  That could be a bit of the 2nd time around syndrome, or it just might possibly be that the production seemed a bit more farcical and deliberately physical than it needed to be.

In the end, it doesn't much matter.  The family behind me had no idea what was going to happen and half my fun was listening to their reactions in Act 2.  I enjoyed this production but not quite as much as I enjoyed my first one.

Doing what they do best, The Atlantic Theater Company is beginning a run of what might be the most compelling and culturally relevant play of the season.

Written by Dominique Morisseau, Skeleton Crew gives us a glimpse into challenges of very blue collar workers at a car manufacturing plant in Detroit. 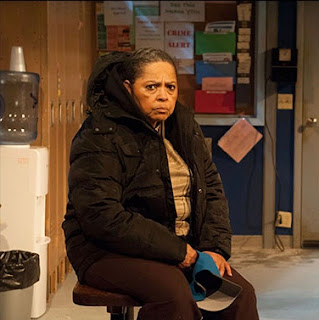 Life is tough.   Life makes you tough.  Who is your family and to what extreme will you go to protect them and their livelihood?   These tough, poignant, and in-your-face questions are all asked and answered by the suburb actors on stage.  Lynda Gravatt (Faye) is the stalwart veteran of the plant.  Jason Dirden (Dez) is the young wild-child, Nikiya Mathis (Shanita) is a young expecting mother with a lot of pride in what she makes, and Wendell B. Franklin (Reggie) is the plant manager torn between the white collar world he now lives and the blue collar world he grew up in.  This ensemble was as tight, on-point, and incredibly credible.

Between the rumors of the plant closing, thefts at the plant, a pregnancy, homelessness, and a gun, to say where there's smoke there is fire is the understatement of the year.   Sparks fly.  Pride is always in the way.  Tempers flair.  This riveting piece is most assuredly best performed in an intimate black box theater where emotions are high and contained. 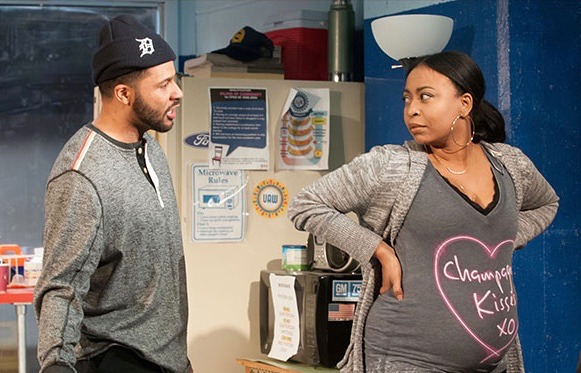 Fiddler on the Roof

Over at the gorgeous Broadway Theatre we have another revival of a beloved classic.  I've seen a prior revival - the Alfred Molina production last in NYC. This time around we have Bartlett Sher led revival staring the usually indomitable Danny Burstein (Tevye).

Of course, a revival usually has to add its own take on the style or material.  This revival (in one of the most opulent theaters on Broadway, by the way) choose to employ relatively minimalist sets (most flew in and out) and few props on quite a large empty stage which was alternatively lit up bright for the company and focus spot lit for individual characters.  There was a large hole downstage that supposedly allowed the orchestra and the lush Jerry Bock score waft into the cavernous theater.  Unfortunately that hole served no purpose since the orchestra sounded like it was a rag time band stuffed in a tight box with a microphone that artificially amplified it throughout the theater.   (As a side note, the very cavernous Broadway Theatre curtained off the rear mezzanine to reduce the size of the actual seated theater.  It struck me that I have seen shows here before when the entire theater was full - and this revival clearly new it just couldn't draw such a large audience from the start). 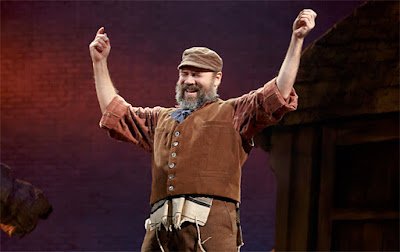 Now as for the classic tale - Mr. Sher chose to begin and end the show with Danny (presumably Tevye's contemporary heir) in a modern blood red winter jacket reading a story from a book which is presumably Tevye and His Daughters which is the actual basis for this play.  Now, not a word was changed but the feel for the opening was flat, uninteresting, as he was literally reading the book to us as he started the tale of this famed musical which leads to the opening number, Tradition.  Interesting choice, but it didn't capture me.   As we get further into the show Mr. Burstein continued to fail at capturing my imagination.  He was too nice, too nebbish, to tentative.  and generally not a bold Tevye.  A great voice, but not deep and booming.  He certainly had moments of brilliance but they were few and far between.  His wife, Goldie, (Jessica Hecht) was equally unsatisfying.  She was too mean, too stern, and not likable,  When we got all the way to Do you Love Me, I was relatively certain that the answer was "No".  Of course the company filled in the blanks along the way - plenty of dancing, hand clapping and foot stomping in classic style.   However, Tevye's Dream and the entire scene seemed to me to be an odd pastiche of monsters straight out of Lord of the Rings.  Of special note (mostly because nobody else earned it), Motel the tailor (Adam Kantor) was a bright spot to the evening having energy, commitment to the part, and a great stage presence as well as a voice anyone would be jealous of.  The 5 daughters, Tzeitel (Alexandra Silber), Hodel (Samantha Massell), Chava (Melanie Moore), Shprintze (Jenny Rose Baker), and Bielke (Hayley Feinstein) were all competent yet bland.   Yes, I felt their betrayals, but just wasn't sold on the consequences.  Even Yenta the matchmaker (Alix Korey) felt too Brooklyn Jewish - which meant she got the audience laughs but wasn't as true to the character as she could be.  Oye! 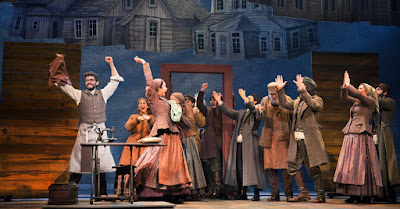 The only star this evening in the theatre was Jerry Bock's score itself - lush and lovely as ever, we know more of these tunes than almost any other musical out there - Tradition, Matchmaker, Matchmaker, If I were a Rich Man, To Life, Sunrise Sunset, Do You Love Me, and Anatevka.  I felt this show eerily resembled the happening of today in the world with the Syrian refugee crisis and similar societal events.  With the show opening and closing the way it did, perhaps that was what Mr. Sher was going for.  I'm glad I had a really cheap ticket.  It minimized the length of my utter disappointment in this production.
Reviewed by: doug marino