Now playing over at the basement black box Theater at St. Luke's - Baghdaddy. This show has a bit of a split personality disorder.  Act I - over the top silliness and slap-stick comedy.  Given the subject matter - it walks a fine line but gets the job done.  Act II - substantially more serious - to the extent that one of the characters in the show even asks if this is funny anymore.  And in general I'm in agreement with the marketing people - It's a good show with a bad name... 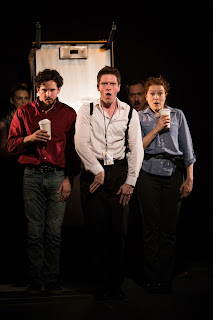 For sure, Marshall Pailet (Music and Book) and A.D Penedo (Lyrics and Book) have a gem on their hands.  Too soon?  Not at all.  We all recall the discussions and debates about whether there were actually weapons of mass destruction in Iraq and why we invaded when clearly the 9/11 terrorists came from other places.   This show re-hashes the facts, adds a few twists, and shines the light on bureaucracy and mistakes and egos involved such that we just might conclude the unthinkable - there wasn't really a real reason to invade.  *shocker* 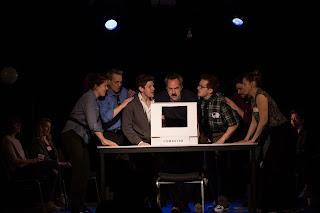 This magnificently rehearsed and talented cast adds energy, enthusiasm, heart, and soul to the script.  Uber cute Brennan Caldwell (Richard Becker) plays the German investigator (without the German accent he does not have and points out). That neon dance outfit was a charmer too.  Brandon Espinoza (The Man) is possibly the hardest working actor on the stage and shirt off works very nicely i must say.... (and they all work hard already).  Joe Joseph (not exactly a middle eastern name) plays Curveball, the Iraqi informant who may or may not have told the truth.  Claire Neumann is possible the funniest person on the stage with her all her different personas and characters.  Ethan Slater (Jerry Samuel) is absolutely the most adorable character (and actor) who wins your heart in about 2 minutes.  Jason Collins takes on the role of Tyler Nelson who is one of the only people who isn't blaming himself.  This is quite possible the cutest and youngest entire cast I have seen long time (Ethan, did you hear that? cutest....)

Speaking of blaming himself, the show is basically a support group for people who think they started the Iraq war.  The support group phases in and out as the show takes over telling you the story.  Did these people really start the war?  In once sense they all were at fault - in another - none of then can be blamed for the juggernaut known as our government. 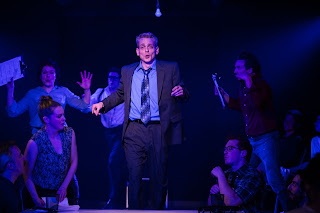 The play suffers split personality as I previously mentioned.  It has not quite worked out which persona (Act I or Act II) is the better one to go with.  It's a bit all over the map but gets the point across.  I think it needs some fine tuning and could really be a powerhouse as the concept is really serious and absolutely something that needs to be shown.  This was it's second run and I think if someone really sunk some money into a production - you would see vast improvements.  For now, trust me it's worth the price of admission and you'll likely walk out shaking your head in agreement with the outcome we all know quite well.
Reviewed by: doug marino