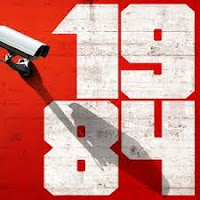 George Orwell's dystopian novel brought to the stage - first in London on the West End, now on Broadway.  The technology and video employed was magnificent.  The direction was crisp, artistic, and suspenseful - after all you're supposed to be kept off-balance the entire time.  The acting, too, had strong moments for each of the 3 stars - Reed Birney, Tom Sturridge, and Olivia Wilde. 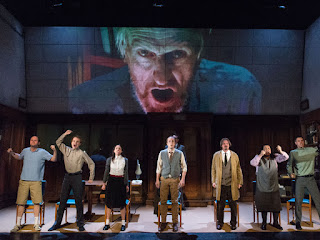 However, the story, laid bare on a stage had the tendency to be entirely too shocking.  Reading the book you can imagine what you like.  Watching the play you have no choice but to absorb whatever they throw your way.  Since I don't make it a habit of wincing and throwing my attention away to the side like I might when watching TV or a movie, my assessment with this play is that it is entirely too graphic and gritty.   It's one thing to watch an ISIS video on TV or an episode of 24 or the news... violence is everywhere.... but in the theatre it just seems a bit too much to electrocute someone downstage front and center and think we are going to enjoy it.

No matter the play, I enjoyed my first trip to Broadway's newest house - The Hudson Theatre - and hope that future plays will be less violent and more enjoyable.
Reviewed by: doug marino