What do you get when you combine a 200+ year old play, a movie musical with Danny Kaye, and really good contemporary comedic actors?   Most likely something like Nikolai Gogol's The Government Inspector now playing over at the Duke on 42nd presented by Red Bull Theater. 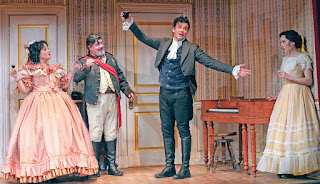 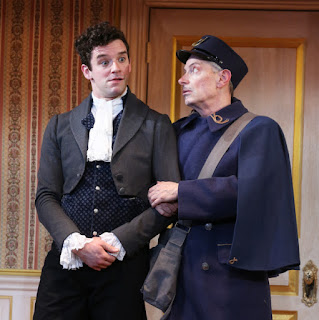 The top-notch cast lead by the indomitable and beyond adorable Michael Urie (Ivan Alexandreyevich Hlestakov) and Michael McGrath (Anton Antonovich) is nothing short of comic genius.  Directed by Jesse Berger, this very old gem of a comedy still rings true even in this day and age of cell phones and microchips.  Although the set was an awkward 2 story narrow runway to perform on, the cast seemed to make the best of it - slamming doors and hiding in closets.  This is a slap-stick comedy after all.  And many sticks were indeed slapped.

Mary Testa, no stranger to the theatre, (Anna Andreyevna) takes her over-the-top mother role quite seriously and literally.  The trio of townsfolk, Tom Alan Robbins (The Judge), David Manis (The School Principal), and Steven Derosa (The Hospital Director) could easily be the three stooges - always together - always bumbling. The scene and show stealing character, The Postmaster, played by none other than the ingenious  Arnie Burton, is quite possibly the show's best - as if picking a best with this cast is even possible.   Fill in the cast with chambermaids, waitress, local landowners, and various townsfolk and you've got a recipe for lots of mixups, mayhem, and madness.

The comedy is fresh, the delivery is crisp, and the laughter flows throughout this romp whose opening night is June 1st.  Grab a ticket and get ready for multiple belly laughs with this one.