It's official - I just saw the Tony award winning play of the year.  Oslo, a new docu-play by J.T. Rogers being presented at the Vivian Beaumont Theatre at Lincoln Center is a bold, crackling, and humorous new play about the back-channel peace negotiations between the Palestinians and Israelis in the early 1990's told with humor, charm, heart, and brutal honesty. 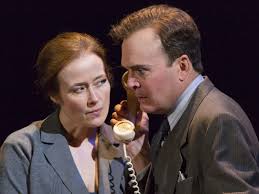 Jefferson Mays (Terje Rod-Larsen) and Jennifer Ehle (Mona Juul) headline the cast as the brains behind the entire idea and operation - an effort in secret to get the two parties to a secret negotiating table Norway where they could exchange real ideas, thoughts, and feelings - not the tried and failed methods of public posturing sponsored by the Americans and others for years.

The cast of characters is broad - heads of state, secretaries of state, foreign ministers, and negotiators - and even a housekeeper and butler.  Top notch performances were turned in by Michael Arnov (Uri Savir - Israeli) and Anthony Azizi (Ahmed Qurie - Palestinian).  Even a worthy Shimon Peres (Daniel Orestes) graced the stage. 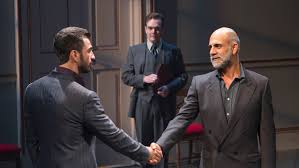 The play sweeps through 3 hours before you know it.  Act I is a clever flashback to the origins of the talks that ends where it started - and sets up Act II - the actual peace negotiations.  At times tense, at others humorous, the play effortlessly glides between the two states often and sometimes unexpectedly.  The play sweeps past the accords, reveals video of the actual signing and hand shaking at the White House among all the parties and goes on to provide you with an abbreviated version of events that occurred post-accord all the way up to today.  Jefferson Mays ends the play on an uncertain yet positive and hopeful note.

Award winning performances, direction, and dialogue all combine to make this sleeper that moved upstairs from the Mitzi Newhouse Theater (off-Broadway) a hit that will inform, entertain, and remind us all just how far we've come and how much work is yet ahead.
Reviewed by: doug marino