The 40th anniversary of the Public Theatre presentation of Hair could not have been more appropriately staged than it was this summer at the Delacorte Theatre in Central Park.  The outdoor venue, the t 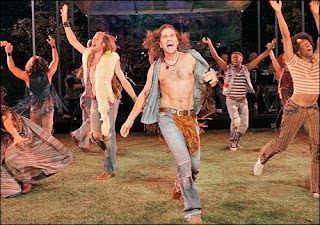 rees, the lights, and most of all the actors playing out a script over 40 years old that is as relevant today as it was 40 years ago.    Hair, The American Tribal Love Rock Musical was around long before AIDS, Bosnia, Global Terrorism and Facebook.    Yet somehow, this piece stands out as iconically in our national culture; a generation's emotions played out on stage.  Times certainly to change - - or do they?  Somehow we find ourselves in a similar situation today.  Different people, different countries, different economics and social norms - yet just about every song rings just as true today as it did in 1968 when Galt MacDermot wrote the music and Gerome Ragni and James Rado wrote the book. 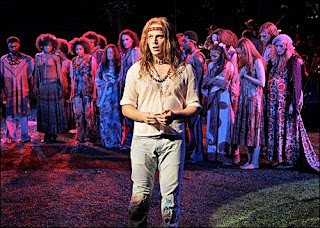 On "stage" (mostly dirt and grass) this time is a talented tribe of modern day activists - Headliner Jonathan Groff (In My Life, Spring Awakening) is uber adorable and even more talented at the tender age of 23 as Claude.  He provides just enough fresh and innocent pared up along side his free spirited, hippie tribal peacemaker and protester.   Will Swenson (110 in the Shade) sinks his substantial chops (and gorgeous, well maintained body) into the tribal leader, Berger.  Patina Rena Miller, as Dionne, would have blown the roof off the theater if
there was one in the opening number, Aquarius.

As a matter of fact, the entire tribe was filled with talent.  And as hard as i looked, i could not find one person who didn't look like they were having fun each and every minute of the performance. Liking your job is important is many industries.  No exception here. 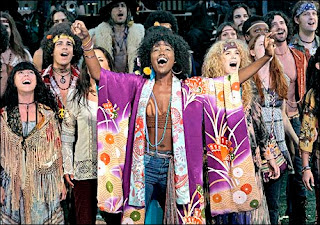 Tickets for this show can be obtained in two ways - you can donate $165 (or more) to the Public Theatre.  In return for that, they provide you with a ticket in advance to the show.  If you would like to get a free one - everyone queues up at 1pm in hopes of being one of the lucky 1200 to get one for that night's performance.  Most
do.

On top of all this good stuff, you get to watch the show outside, in central park.  What more could you ask?  Run... don't walk... and get a ticket to the Be-In that's lasted over 40 years!
Reviewed by: doug marino

Another summer gem in the Summer Stars Encores! series.   Ironically, it's not really about the Yankees at all.  It's about the Washington Senators (go figure!).   George Abbott wrote the now stale and awkward book and Richard Adler and Jerry Ross wrote, for the most part, non-memorable numbers.  It wasn't much of a hit on Broadway, comparatively, but it has its moments. 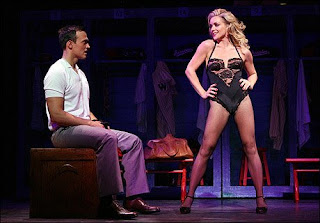 Taking the helm this time around at the City Center are Sean Hayes (Will and Grace) as Applegate (the devil) making his New York theater debut; Jane Krakowski (Nine, Ally McBeal) making a sublime appearance as the seductive Lola; and Cheyenne Jackson (Xanadu) demonstrating his powerful voice and gorgeous looks as Joe Hardy.   One of my all time favorites was also in the cast as Sister - the ever-hysterical, Veanne Cox (Company, A Mother A Daughter and a Gun).

The show to me was an awkward pastiche of scenes that sometimes did not appear to even connect with each other.  One minute boys on the baseball team are talking, the next they are doing a dance ballet (good, but why?).   One minute Lola and Joe are sad and the next they are dancing like Bob Fosse in a Hernando's Hide-a-way type club (good, but why?).  Other times the scene changes were so dramatic that it felt like you were flipping thru the channels on the TV trying to watch 3 different shows.   And what was that silly fan club talent show number (erp!) for?? 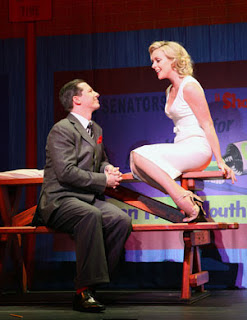 The show does have a few memorable numbers - Whatever Lola Wants and my favorite A Little Brains, A Little Heart (with an emphasis on the latter!).  Jane Krakowski knocked them both out of the ballpark!  Sean Hayes scored big with his performance and showcased his talents playing the piano, singing, dancing, and hamming it up in Those Were the Good Old Days.

I doubt this one will transfer to Broadway - but like they say - you can't win 'em all.  In the meantime, steal third and check it out.  The stars of the show salvage what the show lacks.  You won't go home disappointed.
Reviewed by: doug marino

[Title of Show] on Broadway

The little show that could... The show about a show - about writing an original Broadway musical and the dream of bringing it to Broadway... has finally made it to Broadway!!   It's quirky, amusing, honest, insider-joke-driven, and straightforward as it always was. Of course, for this Broadway run, they've update the show. The journey and story beyond the off-Broadway run at the Vineyard Theatre had to be incorporated - and what a clever job they have done. (Is this Broadway's new reality show?). The new sections chronicle the closing off-Broadway, the lull experienced by the cast, TitleofShow.com web episodes (there were 9 in total) and the trials and tribulations of what to change and what to keep as the show morphs into it's Broadway run.

The humor is as clever, witty and as dry as ever. The jokes and characters remain mostly the same ("Is what we are saying right now going to be in the show?" --echo the line on stage - laughter follows). Kudos to keeping the solo spotlighted celebrity 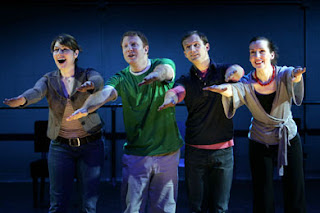 answering machine recordings - Christine Ebersole, Sutton Foster, Patti Lupone and Kerry Butler each brought raucous laughter to the theater. Tourists, fear not, the inside jokes are often explained subsequently (They discuss whether a "Broadway" audience will get the obscure references to Mary Stout being hit by a hot dog cart, Roma Tory and NY1, and the medley of flopped shows in the song Monkeys and Playbills among others)

Perhaps in seeing this early in the run (first preview was July 5) , i was part of a theater audience of friends, industry folks, and the cult-like fans the show garnered over the last two years - but i have to imagine that the brand of humor and the talent on stage will fill the house for quite a while. Jeff Bowen still adorably cute as ever picks apart Hunter's grammar. Heidi Blickenstaff still brings down the house with her vocal prowess. Susan Blackwell is as darkly funny as ever, and, of course, Hunter Bell is as awkward, clever, quirky, and dry as ever. This quartet telling us the story of their story of making a journey to Broadway entertains for over 90 minutes.

Pull up one of your diamond crusted chairs to the Lyceum Theatre and spend a few hours with this entertaining cast before it gets too darn hot!

A darkly funny evening at the theatre. Gordon Edelstein directs a cast of pompous, erudite, and self-absorbed college literature professors on an annual trip to England which degrades from barely entertaining to a debacle to top all debacles. Now, that's the plot, not my review. On the contrary - I thought the intelligent humor was well placed, cleverly delivered both directly and indirectly. Take the scenery - which i believe to be representative of our lives. It kept accumulating on stage from each scene. They brought new stuff out which only served to clutter further with each passing scene. Interpreted by this theatergoer to represent the mess we all leave behind in our lives - physically and emotionally.


The humor was biting, honest, and true. It begs us to look at the decisions we make and what it means to stick to them - and the consequences the flow from them. Kudos to leading man, you all know from TV's Ed - Tom Cavanagh and the entire supporting cast. Tom leads the cast down the toilet on this trip with aplomb. You'll want to see more of him when you leave the theater. There's talent there.

Inside Joke - I made sure to split the bill at 5 Napkin Burger evenly with my theater companion afterwards!
Reviewed by: doug marino